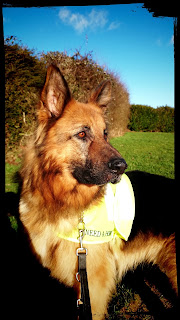 The photo is one of our foster dog, Ty, taken in the park behind my house last weekend. He's off to the vet tonight for his final vaccination, which means we've had him for two weeks now. It's slipped past very quickly.

Asha, our previous foster, is settling in well to her new home, thriving in the company of the young daughter and the resident terrier that are her new packmates, and loving life next to the beach in Torquay.

Apparently she's none too certain of waves yet, but doesn't hesitate to
stick her head under the water to retrieve her toy.

Ty is settling in well enough, but we're having to be exceptionally careful with him around Jack. The two are prone to setting each other off; Ty is as bad as Jack now that he's found his feet in the house, though still pretty non confronational in all other respects. He's just gotten fed up and run out of patience with the upstart youngster continually trying to challenge him.

It's nothing we won't be able to sort out with a little time and effort, but for now they are living in two separate halves of the house, spending time together only outside on walks and passing each other in the house under supervision on the way to or from the garden.
Posted by tatali0n