My eldest son Ben and his lovely partner should complete on the purchase of their first house today.

In truth, he's actually long flown the nest; he came home for a year after finishing university whilst he took his teaching qualifications, but on completing his PGCE and landing a job as a secondary school science teacher, rented a flat down in Bristol and only really drifted home when he wanted something.

The drifts home have become less and less over the last few years, even more so after he hooked up with the French teacher at his school, I guess.

But I guess a mortgage and your first house is a real milestone. He's finally all grown up and moved out.

Maybe it's time I turned his old bedroom into a home office? That is, before his mum takes it over as yet another craft room . . .

The photo above was taken last month, somewhere between Plymouth and Falmouth. Those lovely, elegant birds are frequent company when on passage along the Cornish south coast, either swooping along and just skimming the waves, or circling gracefully above, before dive-bombing their unsuspecting lunch with sleek, lethal efficiency.

So tomorrow Dad and I will head down to Bristol to help Ben and Hannah move house. Tomorrow evening I have a gig, conveniently also in Bristol. It'll be my second in as many weeks, but perhaps the last of the year, unless circumstances change unexpectedly. Then again, if we've learnt anything from this year so far, it's that you can't predict anything, so who knows?

Last Saturday's gig was brilliant, by the way. Everything I needed it to be. Except not enough.

Sunday I'm racing the Albacore with Amanda out on the lake at South Cerney. I was down there Wednesday evening, racing the Laser. That was fun, but the evenings are drawing in fast now, so mid-week sailing will soon be done until next year, and whatever that will bring.

It's been a funny old week.

I've been back sailing for a while now of course, and loving it. We're cruising with Calstar and even started racing dinghies properly again back on the lake on Sundays. And informally, on Wednesday evenings, although the evenings are drawing in now. And not just in the Laser; I'm back in the Albacore sailing with Amanda at last.

But that's only one of the various pillars of my life back in place.

By way of an aside, I also have two posts currently sitting incomplete and in seemingly perpetual draft detailing August's couple of trips away with Calstar; pictures of sun and sea and dolphins all included in the price. I feel a little abashed that I've not had the time to finish them yet, and more so, annoyed that, incomplete, they essentially act as a block to me posting much of anything else up here until they're done. Although I'm clearly working around that.

This coming Saturday we have our first gig lined up since our last one way back on Friday 13th March. It's in a village pub garden, and has been confirmed since they first eased back the lock-down in July. It was also the only gig we have confirmed for the rest of the year, so the diary is looking quite barren.

It's been that long since we last had a gig that in anticipation of this coming Saturday we actually got together for a rehearsal to run through the set. The last time we did that was around or about 2004.

Then, out of the blue, I had a phone call yesterday from one of my favourite Bristol venues. They want to restart their live music, all in keeping with government guidelines and social distancing and all the rest. Basically, it's in a big skittle alley out the back of the pub, tickets in advance, table seating only, 30 people max.

They asked if we'd be interested (of course!) and if so, if we had any dates free (take your pick!)

I reckon when we normally play there we fill the pub with a crowd of a couple of hundred on a good night. So it's going to be quite the different vibe from the usual.

I don't care. For the next couple of weekends at least, my Saturday nights are once more booked up with gigs.

With regards to another pillar of my previous life, a series of messages went back and forth a couple of weeks ago. There was hope the leisure centres would open up in September. That would hopefully mean I could go back to karate at last; I normally train in a school sports hall about five minutes from my house.

Then as August drew to a close, the local hall confirmed, for various reasons, they wouldn't be ready to accept us back until October at the earliest. I was a little bit crushed to be honest, but in the greater scheme of things, there are much bigger concerns abroad in the world at the moment. I'm doing fine. 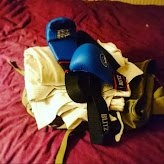 This morning I received a message from Sensai to say there was a single Thursday evening space available over at the Cinderford club, and would I be interested? So as of tonight, another pillar will be restored. It involves a forty minute drive each way and I'm pretty sure we're not allowed contact, so no kumite, just kata and kihon. But I still find I'm quietly elated at the prospect.

And fully expect to hurt like hell tomorrow morning.

August and Everything After

In these strange and often frustrating times, it’s been fun and busy and refreshing, and has disappeared in a flash. Likewise, summer now seems to be following hot on its heels, with pessimists crawling out of the woodwork to decry “Schools have gone back!” and therefore “Summer is over!”

I refuse to be drawn in by these naysayers; far from 2020 being the summer that never was, summer is far from done yet, with much left still to salvage. I still have more weekends away on Calstar to look forward to, hopefully a couple of weeks away sailing in Greece planned for the end of October, karate will hopefully restart next week or soon after, and a week on Saturday I have a gig booked in a pub garden, the first since Friday 13th March, and possibly the last of 2020, but a gig nonetheless. I only hope it doesn’t rain.

Oh, and the open mic nights are restarting at the Old Restoration again over in Cheltenham. Not quite the same as a gig exactly, but a distraction until the gigs return in full. The band’s diary for next year is rapidly filling, although why next year should be any different to the latter half of this one, I’m not so sure. We can but live in hope, I suppose.

In the meantime, I currently find myself feeling a bit like an errant school boy that’s let his overdue homework pile up too high to in any way seem assailable. Across two weeks away sailing at the beginning of August, and a long weekend sailing at the end, it appears I took 1185 photographs and sailed just shy of 271 nautical miles up and down the south coast between Brixham in South Devon and the Helford in Cornwall. And in between the trips away with Calstar of course, there was the usual chasing around the cans on the lake at South Cerney.

I feel like I owe myself some sort of accounting for the month, but it’s quite difficult to know where to begin. Perhaps not by simply posting all 1185 photographs, not least because, as is the way with these things, a lot of them are a bit rubbish and most of them very repetitive. But I think there are a few gems amongst them that I might try to pick out.

Meanwhile, hello September. And no, summer’s definitely not over yet.