No, not me. I mean out over the Atlantic somewhere.

We'll make the final call this evening, but I've got to admit, Cardiff is now looking quite unlikely for the weekend. We might just squeeze in there just ahead of the really heavy stuff on Saturday, but we'd have a hat full of it for the ride back to Portishead in the early hours of Sunday. In the dark. 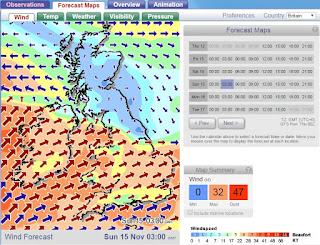 On the bright side, that would mean that I'll be around at the Lake on Saturday to help out with the Safety Boat training (which is fun, as a good part of it it involves capsizing dinghies for the crews to rescue) and I have a willing volunteer lined up to crew Buffy with me on Sunday.

If it really does come in at F6 gusting 8 then that could prove quite entertaining.
Posted by tatali0n No comments:

Unfortunately, not so much for the weekend, however.

Still time, so we live in hope. 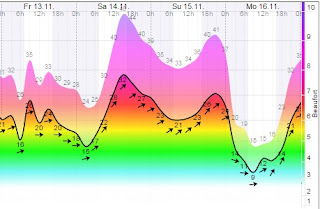 I'm telling myself that any forecasts for Saturday and Sunday are still, at this point in the week, long range and so not to be trusted. It'll probably turn out to be much calmer than it's currently promising.

I think the "go/n-go" will probably be Thursday evening. If it is a no-go that will still give Dad time to make alternative plans for the weekend, and for me to find a crew for the Ent on Sunday.

If the forecast mitigates to more manageable conditions, then we're hoping to sail Calstar out to Cardiff and back over the weekend. The tides are straight forward for the trip down, but coming back on the Sunday will involve leaving Cardiff at 0430 and sailing back up in the dark to arrive back in Portishead a little after dawn.

The defining characteristic of sailing in the Bristol Channel is that the tide dictates when you leave and when you arrive, rather than more the minor considerations such as personal preference, available daylight, benign weather or the like. If we're going to sail much at all through the winter, we're going to have to get used to handing Calstar out there in the dark.

Getting used to night sailing will also open up more options for cruising next summer. Swansea, Lundy and Padstow all leap to mind.

We've sailed the run back from Cardiff to Portishead a good number of times now. Departing in the early hours of the morning and sailing most of the route in the dark seems a good first step. The waters are familiar, the boat is familiar, so we're only pushing one aspect out of our existing comfort zone. The plotter makes the whole prospect an awful lot easier, as does the fact there are no lobster pots or stray buoys around these parts to run into; the tide flushes them away.

Though there is still Vega's mast out there somewhere, perhaps.

I can't say I'm not more than just a little apprehensive, but I'm sure we'll be fine. However, we are not going if there's still the slightest hint of 40 knot gusts in the weekend's forecast by the time we get to Thursday evening. 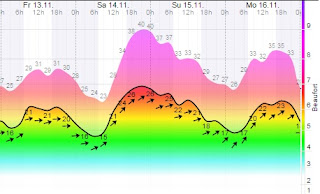 In that case, Calstar can stay in port. I'll find a crew mad enough to race Buffy with me at Frampton on Sunday instead, and try not to break her or us whilst doing so.
Posted by tatali0n No comments:

Of ringcraft and the replaceables 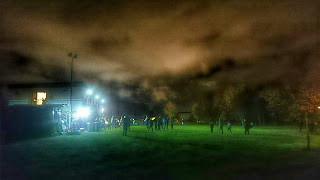 It's been two whole weekends away from the water.

This last weekend was always going to be too busy; a gig Friday night, Saturday promises to keep on the domestic front, although I sweetened that for myself with an hour of karate in the morning, and Sunday Nikki wanted me to go with her to a GSD Rally in Bridgewater in aid of the dog rescue we support.

The weekend before the one just gone had looked really promising, and Dad and I had planned to sail up to Lydney, meet friends and sail back down channel with them. However, Dad had been laid low with a chest infection the week preceding and had cried off, needing the weekend to recoup and recover. The Sunday was foggy and still; could've raced Buffy at the lake, but couldn't find anybody to crew. Single-handing an Enterprise in a still water drift is an uncomfortable business, so I stayed at home, unable to inspire myself to head down to the lake.

Always a mistake, and so I spent the rest of the week that followed regretting the missed opportunity and knowing I'd definitely not get afloat the weekend following, now just gone.

Before this begins to sound too much like I'm marinating in self-pity, I should add that despite beginning to feel just a little captiaterraphobic from not having gotten afloat for what now seems like an age, it was still a great weekend. 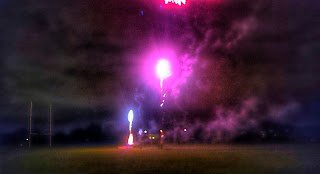 Sunday's Rally was fun. Friends I've not seen in a while, lots of gorgeous dogs, some of which we'd fostered whilst they were in rescue and were now clearly thriving in their new homes with their new families. There were two show rings; a "fun" all breeds novelty ring in direct support of the Rescue, and a "serious" GSD breed-specific one.

We took Lilly with us to the show, as she's the calmest and most mature of our lot, so could be trusted to behave. The rest stayed at home with Sam. She and I were then bribed and and bullied into entering a couple of competitions: "Prettiest Eyes" in the novelty ring and "Long-coated Bitch" in the GSD ring.

Confession up front; I don't do dog shows. Don't really understand them or the concept of "ring-craft". I don't really understand how, after having agreed to do two competitions, Lilly and I ended up in the ring on four separate occasions, or came away with three rosettes  although I do know one of them was a 3rd place for "Prettiest Eyes" having been blatantly and unashamedly robbed of better by a couple of puppies.

Most amusing moment was, whilst in the "serious" ring, when the judge asked us to "stand" our dogs. Lilly, of course, took that as an invitation to sit, and when I remonstrated with her, to subsequently lie down. She's not a daft dog, I'll swear those 3rd prettiest eyes (officially so according to the rosette she'd by then won in the other ring) were mocking me.

I should probably qualify "serious". My impression was that the people involved in the show ring took their ring craft and their dog shows and their dogs and their competition as seriously as I took my racing. They were serious competitors and serious judges speaking a technical language all of their own, and for the most part indecipherable to me. But they were very welcoming and supportive of Lilly and I as rank, ignorant newcomers. I don't pretend to necessarily understand the attraction of the whole thing, but they're nice people and lovely dogs and we very much enjoyed the opportunity to get involved.

The judge was particularly complimentary of Lilly, albeit in reference to her breeding and temperament, rather than her obviously absent discipline or ring-craft. But she already knew she was special, the little minx. 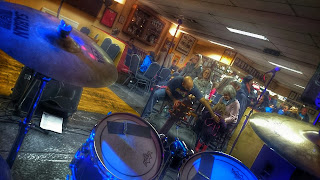 Friday's gig was an interesting one.

For the last few years, we've played the at Whitehall Rugby Club after their fireworks on bonfire night, and I'd thought it odd that we hadn't apparently been asked this year, but not hugely surprised. Simon, our contact there, had booked us a few times through the year for other events already, so I couldn't really begrudge them perhaps wanting a change.

Then, a couple of weeks ago, I get a text message: "Just want to check you guys are still okay 6th November" or words to that effect.

I'd somehow managed to take a booking and not put it in the diary. In almost twenty-five years of playing this game, that's never happened. I'm utterly religious about these things. And the killer this time was that Jay, our bassist was away on holiday, visiting his wife's family in Indonesia.

We have stand-in drummers. Lots of them on standby, in fact. Bean, our drummer, teaches drums for a living, so that provides a handy pool of substitutes when we need one. Which we often do. Bean, being the only full time "professional" musician in the band, often finds himself booked out elsewhere when we have a gig, so it's good to be able to replace him as needed.

We have a couple of stand-in guitarists. Matt is less likely to be unavailable, but it does happen. And we cope. He's also a replaceable.

The trouble with Jay is that, as well as playing bass, he also does the sound. Which means he's the brains that rigs the PA and tweaks all the knobs and sliders so that we sound great. The bass is replaceable, and indeed a couple of phone calls made and our mutual friend Tufti had volunteered to stand in for my absent brother and his four strings.

But we'd still need to rig the PA.

I got all the kit out and made sure I knew how to put it together in Dad's garage the Wednesday evening before the gig. Technology is a wonderful thing, and stood there in the garage I was able to find and download manuals for the active speaks and sound-desk onto my mobile phone.

I then got to the gig early on Friday afternoon. Matt turned up just as I'd finished lugging the gear upstairs into the clubroom, and gave me a hand with all the wires.

There was a brief "we've plugged it in, but there's nothing coming out" moment when we first powered it all up, but that was resolved by punching, in a panicked fashion, at various buttons until the sound made its appearance. There was another "Goddamit! the fold-back isn't working" moment that was quickly resolved once I remembered I hadn't yet turned the fold-back speakers on. 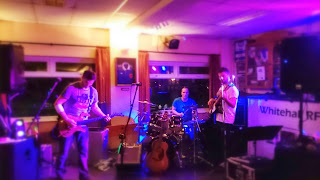 And we had to use the barmaid as the canary in the mine: "Can you hear the vocals? No? How about now?" and then "Can't be too loud, she doesn't look like she's in pain". Trouble is, you can't sound-check vocals very easily when you're the vocalist and thus stuck on stage with guitar and microphone.

But it worked, and because I'd got there early to assuage my anxiety at having to set everything up myself, we had it all done and sound-check out of the way before the fireworks started, so were able to go out and watch all the pretty explosions ourselves before we played. It was a great display, followed by a great gig. And kids with sparklers will forever scare me, even when they're not mine.

I guess it was "just another gig" insofar as any of them ever are. And Tufti, our dep-bassist was the undoubted star of the show stepping into the breach and helping us out like that with minimal notice and zero opportunity of rehearsal, but I felt  a tremendous, disproportionate sense of achievement in carrying it off.

And a certain smugness. They're now all replaceable, all have potential stand-ins on call for any gig they can't make. All of them, that is, except for me.