I'm sure this isn't how you're really supposed to warm-up for a Sunday evening gig. But it worked for me.

A couple of observations. Next time I'm sailing in snow, I'm going to wear my shades; sure, no sun, but snowflakes really sting the eyeballs when you're beating to windward. Secondly, snow is much easier to bail than water. But if you don't keep it up, it melts. And perching on the balls of your feet in iced water gets very painful on the toes.

Oh, and in the end, we did better than fifth.

It's been a good day. 0219, and I've not yet wound down enough after the gig to go to bed. So it was obviously the right choice of warm-up.
Posted by tatali0n No comments:

Friday and Saturday were gig bound, so no sailing for me.

So I booked Monday off work and Dad and I took advantage of a window in the weather to sail up to Portishead Sunday afternoon and back Monday morning. 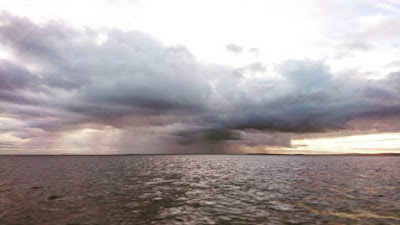 Spring tide, low water Cardiff on Sunday was around noon with less than a meter. We could've left before the water ran out, but decided to leave later and aim to arrive up in Portishead a little after dark. We both know the route and destination very well by now.

If nothing else, it meant I could have a relative lie-in on Sunday morning to recover from Saturday night's gig.

Except for a bit of squally rain that blew through and quickly passed about an hour out, it was a gentle sail up, a deep reach under full sail with no more than a F3 out of the west to carry us along with the tide.

The light and the sky were exquisite, through the couple of hours leading into dusk through to the sunset itself, a gorgeous finale to what had been the gradually mounting crescendo of the encroaching evening. 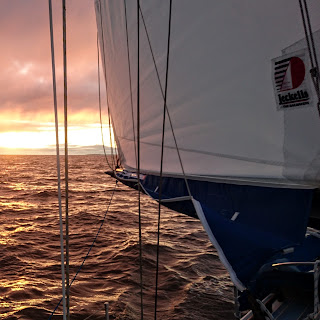 It wasn't cold, and once the earlier squall had passed through, the evening stayed dry.

The lights of the Clevedon and Portishead shore were very pretty, and the hour of sailing through the darkness up the four miles from Welsh Hook up the King Road after the sun had gone down was tranquil and quite uneventful.

Anticipating things being slower in the dark, we dropped the sails earlier than usual on the final approach to Portishead, turning head to wind off Kilkenny Bay and stemming the tide. The main halyard tangled itself up into a veritable bird's nest, but I spotted the problem before I released it and spent a couple of minutes cussing and muttering with Dad holding us head to wind under the engine as I un-nested it. 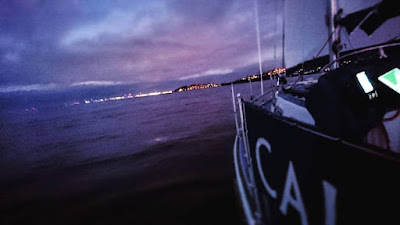 Sails down, Dad now on the helm for the last half a mile, I was focused on sorting the fenders and mooring lines when I just casually glanced up and saw a dark mass looming up on us. For a moment I thought we'd failed to spot another craft, then saw the bright flash of red atop it and realised it was the Newcombe buoy.

The tide was carrying us into it at about 6 knots plus our own speed through the water. I shouted a warning to Dad, but he still couldn't see it in the darkness. I tried to tell him to turn, but in the panic of the moment simply couldn't remember my left from right or port from starboard. 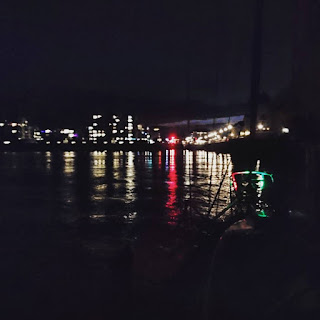 I grabbed the tiller and Dad and turned hard to port to dodge the oncoming mass. Dad now understanding the direction needed, but still unable to identify the buoy we were trying to dodge went with me and helpfully gunned the throttle.

Newcombe slid pass, missing us by a good boat-length or more. 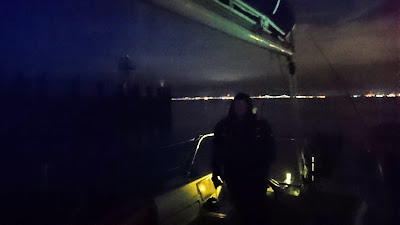 It was a salutatory lesson. I'd handed over control to Dad when we took the sails down but hadn't warned him the buoy was coming up, even though I new perfectly well where we were and what was ahead. Then I'd become distracted by the bird's next of my halyard and lost track completely, my focus now in the boat on fenders and lines rather than looking out, where it should've been. 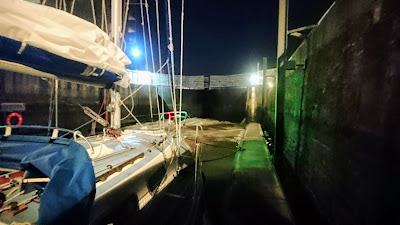 Dad hadn't spotted the red flash of the buoy's light against the glitter and glow of the lights of Avonmouth and Portbury and hadn't seen the hole in the darkness even once it was on top of us. With the moon hidden behind thick cloud, the night was as black as pitch, but the shore line very brightly lit to starboard and ahead (and distractingly pretty) 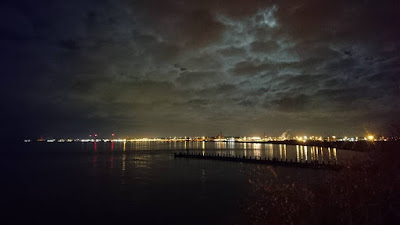 Safe into port we had supper at The Royal, overlooking the Bristol Channel. The views from their carpark are lovely, but whilst the food was nice, we both felt we'd probably have been better fed had we gone to our usual Italian.


It was an easy 9am lock out the following morning for the sail back to Cardiff. The wind was on the nose this time, giving us a three hour, 20 mile beat close hauled all the way back. Most of it was under full sail, except for about an hour when the wind increased and I pulled the first reef into the main and put a roll into the headsail. 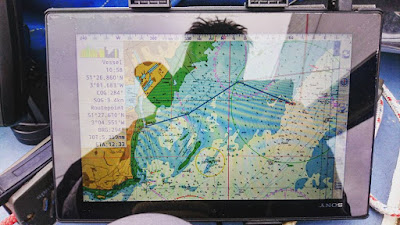 It blew through though, and dropped back to a lazy F2 or 3. We arrived off the Outer Wrack outside Cardiff about an hour before low water. Barrage Control advised they still had a bit of water in, so we should be okay if we kept to the channel, but gave no guarantees.

We gave it a shot.

There was about 3 knots of flow pushing against us, down and out of the Wrack Channel, so we crawled up the middle of it with no more than a knot and a half of speed over ground. Dad was being conservative with the throttle in case we bottomed out unexpectedly. 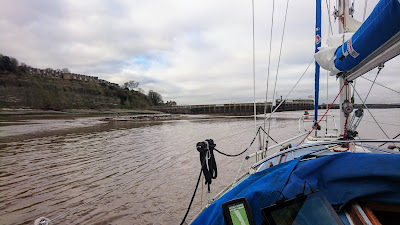 The spur leading from the channel to the outer harbour wasn't much more than a muddy ditch. As we turned into it, the depth sounder optimistically read 0.1m under us but we could feel the silt sucking at our keels.

Barrage Control advised he was reading 2.6m over the sill of the lock, but couldn't account for silt. We were welcome to try and enter if we could get there, but he stressed there was no rush and we were equally welcome to sit it out and wait for the tide to turn.

Calstar continued to push along at about half a knot through the outer harbour, dragging her fins through the mud. We were inching forwards and Dad wasn't labouring the engine, so we kept at it. 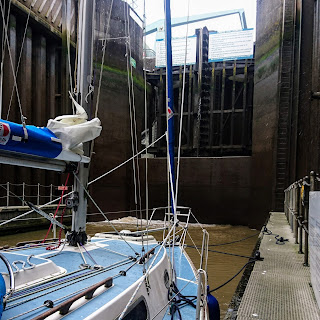 As we passed through the lock gate and over the sill she finally came free, and, so liberated, we pulled up alongside the lock and made fast to the pontoon, just in by the very skin of our teeth.
Posted by tatali0n No comments: 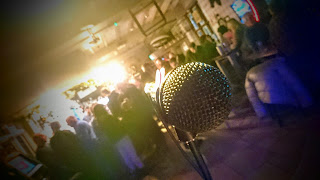 The Horseshoe, about twenty minutes before the band went on earlier this week. Was a good night. Always a treat to have professionals providing the lights and PA. Means it's really easy to pack up afterwards. Just unplug and carry your amp to the car. I was home by midnight!

Still had a very hard job getting up for work the following morning. Old age is catching up with me. Mid week gigs ain't so easy with the late nights any more.

But we soldier on.

Smart togs and best behaviour tonight, as we're playing a cricket club's annual ball. Will hopefully have time for karate tomorrow morning then Saturday evening we're playing in a lovely little pub just down the road from the sailing club; expecting lots of friends and family at that one so it should be most excellent.

Sunday I'm heading down to the boat. Dad and I are planning to sail up to Portishead on the Sunday afternoon tide and then back again Monday morning. Weather currently looks great and I have Monday booked off work.

Unfortunately, Nikki doesn't, so it's just me and Dad. But she's working all day Sunday as well, so she'll hardly have time to miss me.

In other news, it's my little girl's birthday today. I have the gig of course, so won't see her until tomorrow, but she's coming to tomorrow night's gig. I won't sing her Happy Birthday, but I might just sing her a version of Don McLean's American Pie when she inevitably asks for it. There is possibly nobody else in the world the band will let me do that for. And her brother Ben is coming home from Bristol for it as well, so we'll have all the kids around the house for the weekend.

I'm looking forward to seeing them, but glad I have plenty of excuse to be out of the house. I miss them, but I've gotten used to the peace and quiet and lack of inevitable disruption and find I quite enjoy it. Of course, their littlest brother Sam still lives at home, but he's unobtrusive to the point that he's a pleasure to have around.

My little girl is 29 today. That should probably make me feel old, but it hasn't caught up with me yet. Don't see that it ever will.
Posted by tatali0n No comments: