Lovely sail over from Plymouth, started very blowey, dropped to nothing just as we arrived outside the river mouth.
Goose-winged all the way.
Posted by tatali0n No comments:

I have Friday off work. No gigs. Don't need to be home until Sunday. Don't wish to tempt fate, but it looks like sailing weather ....
Posted by tatali0n No comments:

Finally gave into the temptation, and replaced the Garmin watch I lost in Falmouth earlier this year.

An arguably expensive non-essential, insofar as we have all manner of alternative means of tracking where we are and where we're going aboard Calstar. On the other hand, I don't think there's really such a thing as too much redundancy, I've really missed the convenience of having all the information on my wrist this last summer, and a reliable means of recording our track.

Okay, it's a toy. It's a shiny. I wanted it, so I got it. I'm not going to make any excuses. It cost the equivalent of a couple of pub gigs and a wedding, and was saved up and paid for with my band earnings.

I did manage to find it at a discounted rate, (Internet) mail order from Marine Superstore down in Portsmouth, and delivery was free and next day; so as long as it works out of the box, I'm very impressed with them.

Slight turbulence as we climb through the next layer of cloud. Puts me in mind of sailing through overfalls.

Haven't flown for years. Had forgotten how much I missed it.
Posted by tatali0n No comments: 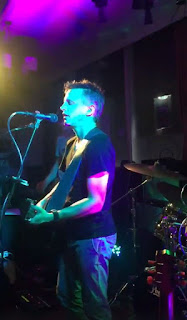 The previously bemoaned maudlin state of mind didn't last beyond the first song. It was a great gig at The Railway last night, as always. Lovely crowd, with many faces amongst them that we've seen so frequently over the last couple of months with the spate of weddings and birthday parties we've had in Bristol of late that you'd worry they might start to think I was stalking them.

Overslept this morning, but otherwise feeling fit and well, if a little resentful that I'm not sailing on such a lovely day. Plane to catch early this evening, so I'd best get on with packing my bags.

Coffee first though, I think.
Posted by tatali0n No comments:

Setting up earlier, on in ten minutes. Not feeling it tonight, have a mouth ulcer under my tongue that brings tears to my eyes just to talk. Singing is going to be interesting.
No sailing this weekend. Have a plane to catch tomorrow evening, working up north for three days next week.
No sailing. Nothing to do with the pain in my mouth. That there is probably the source of my somewhat maudlin frame of mind.
Still, the show must go on.
On in five now.
Posted by tatali0n No comments:

Whilst reflecting on the ongoing debacle of the Labour Party and antisemitism over my morning coffee, and lamenting the ever continuing chaos and idiocy of the saga that is our nation's impending exit from the European Union, this survivor's story of the Warsaw ghetto I came across on the Guardian's website this morning made for a moving read.

I won't risk nailing my own colours to the mast on the state of current political affairs, I don't want to add yet more fuel to any fire nor risk any inadvertently mislabelling myself as any kind of racist, antisemitic or otherwise. I'm not, and the idea is abhorrent to me. But I do fear that many of the accusations of antisemitism and racism are being bandied about so freely at the moment are being shamelessly used to advance another agenda.

Perhaps that's already too many nails in the mast?

For context I should admit to having a great deal of admiration for Corbyn. I've twice now enthusiastically voted for him as leader of the party I support, and look forward to eventually voting for him in the next general election.

But enough of that, I fear I've already strayed to far. Although the stain of politics in these post-referendum days seems colour all aspects of life, I try not to let the it seep too much into the writings on this site, or for that matter anything else I write. I should really stick to posting photos of boats, dogs and bands.

Anyway, it was this that caught me in the article I read, and that motivated this post:

"If disaster comes, you will find that all the myths you once cherished are of no use to you . . . .  And after it’s all over, you will watch as, slowly but surely, these harshest of lessons are forgotten as the witnesses pass on and new myths take their place." - Stanisław Aronson, Tel Aviv 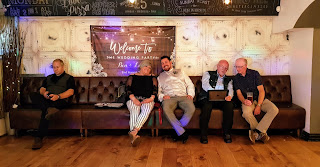 Of all the various snaps I took over the weekend, I think this one was my favourite.

In a past life, the groom, Ben (centre right) was the landlord of the Golden Lion, a pub in Fishponds, Bristol, and along with a man called Alistair, then the landlord of the neighbouring and now long defunct Farrier's Arms, was instrumental in nagging me to put the band back together after we essentially derailed ourselves at the end of 2003.

He's been out of the pub trade for some time now, but over the years Ben became a good friend of both myself and my family. He and his lovely new wife Laura invited us to a party to celebrate their recent wedding, provided, of course, that we brought the band as well.

I took the photo as I we were rigging the band's PA, about twenty minutes before sound-check and sometime still before the guests were due to arrive. Over on the left is Al, another good friend who'd kindly offered to sub for our regular drummer. Either side of the groom are, of course, my wife and my dad. Next to my dad is Ben's new father-in-law.

I don't exactly know why, but the photo just puts a smile on my face.
Posted by tatali0n No comments: