I probably should've bought a radial rig for the Laser. I kind of need a radial rig, if I'm honest. On the other hand, the Takemine acoustic I currently use for gigs is long past her honourable retirement date. She still sounds as sweet as the day I first picked her up off the stand in the guitar shop, but she's looking very battered. She's done twelve years of hard gigging with me now.

A friend, Will, suggested a trip to a guitar shop over in Guildford. He wanted a new amp to go with his new guitar, and this was apparently the place to go for one. He mentioned they also had a nice range of acoustics. I thought, why not? It's a day out. Not like I have to buy anything. The Takemine's probably good for another couple of years at least.

Well, that didn't go to plan.

I spent a good hour or two in their acoustic room trying to persuade myself I didn't need this. It's not that I couldn't afford it. Although it was twice what I'd originally planned for in my head when I did a few "what if" mental calculations the night before, you know, "just in case". But like any guitar I buy, she'll quickly pay for herself after a few gigs. 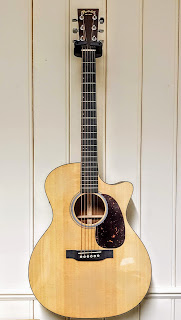 So here then is the new mistress in my life. She's from Nazareth, Pennsylvania, and she sounds just as pretty as she looks.

We have our first date tonight. A birthday party down in Bristol. The birthday girl is a friend of mine and long time friend of the band, so it should be an absolute ball. We can't wait.

Friday night and no gig

I have a night off and think I'm falling in love with Chopin.
Posted by tatali0n No comments:

Reading about sailor Susie Goodall of the Golden Globe Race, currently dismasted and awaiting rescue in the Southern Ocean, lead me to the following article written by a former features editor of the Guardian, Susan Smillie. She downed tools a year ago to sail around Britain, got as far as Lands End and decided to turn left instead of right.

Her story put a smile on my face, and is well worth a read:

www.theguardian.com/.../setting-sail-one-womans-year-alone-at-sea
Posted by tatali0n No comments:

On Sunday morning the weather came in heavy and wet. Not especially cold, but the water temperature is still biting. Despite not getting to bed until 0300 the night before, I tried to get to the sailing club early to give myself time to sort out the boat; I’ve replaced the tiller and renewed the XD control lines; the cunningham, outhaul and kicker, so they all needed to be rethreaded and set up properly. Whilst doing so, I removed one of the purchases from the kicker, reducing it from 18:1 to 9:1 to reduce the string in the cockpit and make the control a little more direct.


The wind was averaging in the mid-teens, but gusting up into the top 20’s or more, so I left the thicker mainsheet rigged. If I’d had a radial, I’d have rigged down to that, but instead I have a piano. Practice is going well, by the way, every evening is an adventure.


Ten boats rigged for the first race of the morning, a pursuit, but only one other Laser turned up. Jon does have a radial rig but although he mentioned in passing that he’d considered rigging it, opted for a standard sail to match mine. The gusts had eased back whilst we were setting up ashore, so I imagine that and the fact he’d be racing against me with my standard rig coloured his decision.


In a pursuit race, each different class of boat has its own start; the slower the boat, the earlier the time and the bigger the head start on the faster boats that follow. With only two of us in our class I was laid back about starting, loitering upwind of the committee boat at the starboard end of the line, right up into the last thirty seconds, when I realised that Jon had put himself a couple of boat-lengths to leeward of me, right on the layline to the pin, and had effectively shut me out.


Kicking myself for my inattention, I tacked then gybed to give myself a fresh run at the line, crossing an inexcusable eight seconds late, whilst Jon powered up and shot down the line, crossing at the port end bang on the gun. A hard, gusty beat followed, hampered by dirty, spoiled air from the slower Solos rounding to windward ahead. By the time we reached the mark I’d made good most of my mistake however, and found myself right on Jon’s tail for the downwind leg.


We hit the downwind mark in the teeth of a huge gust; unwilling to get too aggressive with Jon so early in the race, I conceded the overlap well outside the three boat lengths needed and positioned myself to take the outside line. Pulled on the controls in preparation for hardening up, and then lost control completely, broaching in the gust, before pitching back into windward by the mark, foot caught in the toe-strap and half the lake getting shoved up my nose as the boat then continued to power downwind on her side with the sail still proud of the water and full of wind.


By the time I recovered, giving myself a black eye from the flailing boom as I struggled to untangle the mainsheet from the rudder blade and get the boat sailing again, Jon was already half a lap ahead. Smiling to himself, I hope.


I closed the gap back up over the next half hour, inevitably gaining ground on the windward legs, but never getting close enough to pass.


And then we rounded the second windward mark and bore away for the long broad reach down the length of the lake to the gybe mark, and a gust hit, knocking him flat. I ducked past the end of his now submerged mast, hiked out hard throwing my weight back as the boat took off, skipping over her own bow-wave in a spume of spray as we shot away from him.


The conditions worsened over the last ten minutes of the race, the gusts coming in harder and quicker. I finally caught and passed the back of the Solos to climb back to the middle of the fleet, Jon caught another piece of bad luck and capsized on top of the windward mark. He was still struggling to disentangle himself from the buoy and get his boat back up, safety boat standing by, when the gun signalled the end of the race.


Back ashore for lunch, a hot mug of tea, then back out for the afternoon class race; two more Lasers joined us to make a fleet of four, both rigging their radial sails.


Determined not to be caught kipping on the start line by Jon again, I got their early and hovered, powering up in the final seconds before the gun to cross fast at the starboard end of the line, bang on time. The start, much improved from the first race, paid dividends. I can’t actually remember if I made it first around the windward mark, but within the first ten minutes I’d secured the lead, albeit with no great comfort in the margin; Jon doggedly snapping at my heels at every mark rounding.


The following hour was hard, muscle-pulling hikes to windward, screaming planes down the broad reach and perilous, tippy runs dead downwind. At one point, I misjudged the reach, failed to spot the gust before it hammered into me and had the boat roll over on top of me, just where it had caught Jon in the previous race. Past the point of no return, as the boat rolled on top of me, I grabbed the windward gunwale now directly above my head and as the mast hit the water, pulled myself up and rolled over to land on the dagger-board. I could see Jon on the leg behind, beating up the layline to the windward mark I’d just rounded, closing rapidly.


The boat came back up, blissfully untangled and pointing the right way, and we were off again, still desperately clinging to my now tenuous lead.


By the time it was all over, I’d landed and was pulling my boat back up the horribly steep concrete slope of the shore, I was happily exhausted, battered and bruised. Jon landed not long after me. Two races, and I’d beat him in both, if only just.


As he pulled his boat up the shore behind me, still insofar as I could tell looking as fresh as he’d been when we’d started out earlier that morning, despite his various icy and involuntary swims across the day, he commented a wry grin words to the effect that if only he were twenty-five years younger.


I think that put me in my due place. If in twenty-five years’ time I’m still out there on a hard, unwelcoming winter’s day like that and still giving the competition a good run for their money, I’ll count myself as having won. Regardless of where I might finish in any given race of the day.
Posted by tatali0n No comments: 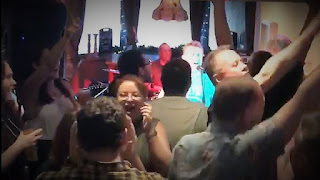 It was a good weekend just gone.

My daughter and eldest child turned 30 on Saturday. I briefly pondered on whether or not that fact made me feel old. But no, it only leaves me feeling vaguely accomplished. Unjustifiably so, as any accomplishment in reaching 30 is entirely hers. But I’m very proud of all three of my children.

The pub where my daughter works had booked our band to play Saturday night, not entirely by coincidence alone, so the night turned into something of a birthday party for her.

Also, not entirely by coincidence alone, her boyfriend Dan asked her to marry him. She said yes, of course, and seems very happy. I'm delighted for them both.

And it was quite the party. My favourite kind of party, in fact. One where I can focus on the gig and not have to work at being sociable.
Posted by tatali0n No comments: 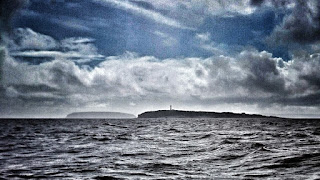 I've just read that the date for the 2019 Holms Race has been announced as being 14th September. I don't have a gig. Unfortunately, I don't have a boat in the Bristol Channel anymore either. 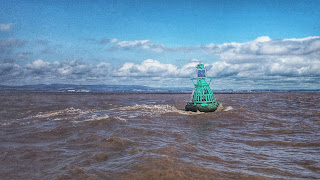 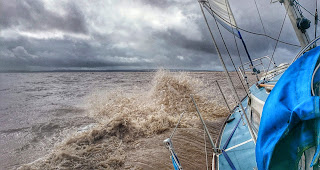 On the other hand, you never know what opportunities may arise, so I might just pencil out the date in my diary anyway. 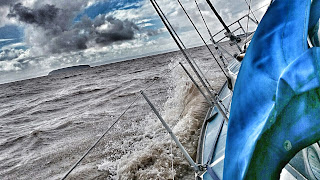 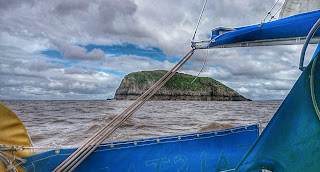 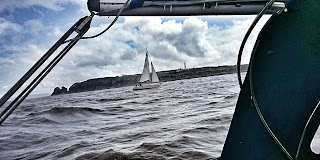 Meanwhile, as it's otherwise a slow news day, I thought I'd just repost some photos taken the first time Dad and I entered Calstar in the race back 2015. 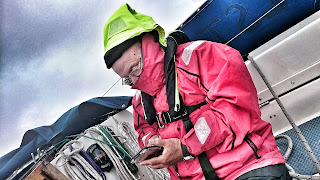 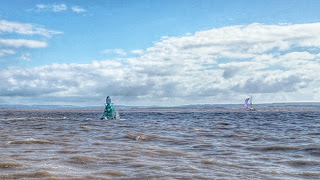