With about 10 meters of tide expected at Sharpness around 10:30am on Friday 30th September, this was the obvious day for Dad and I to pick for a return to Frampton Pill.  In the absence of a suitable tide falling on a weekend this year, we scrubbed the idea of trying to organise a fleet from FOSSC again and instead opted to do it alone with the Drascombe.

﻿As this would be the third year running we've ridden a spring tide up the Severn Estuary to land at Frampton Pill, you could argue it's becoming something of an annual tradition.

As H, my good friend and trusty wingman [we share ownership of an Enterprise that we race together at Frampton Sailing Club] so willingly stepped up to the plate as my replacement last time after I inconsiderately broke my foot in the week leading up to last year's foray out of Thornbury, it seemed only polite that we invited her along again as there was room in the boat for three. And she offered to bring coffee and cakes. Likewise, Brian Bailey, the man with the original inspiration for this whole silly thing, said he'd be there to meet us at the Pill if we made it that far; I think by way of a witness to prove we'd been there!

As we were flying solo, unlike previous years we'd have no way to retrieve the boat from the Pill so this time decided we'd sail out of Lydney on the flood, land on the slip at Frampton and then go back with the ebb to land and retrieve back at Lydney Yacht Club. This had the added benefit of doubling our time on the water, but with a somewhat greater risk we'd end up getting caught out by the tide if things failed to go to plan.

The night before, the forecast for the Sharpness area was a southerly F3, though starting lighter and building through the day. With the weather in the throws of the recently mis-labelled (and now much missed!) "Indian Summer" the tempretures were expected to be into the 20's by 10am, so it was promising to be a last fling for shorts and t-shirts.

With high water at Lydney due at 10.32am, the slip would become viable from around 9am onwards. That same water was due a little later at Frampton for 10:46am, so we needed to be nudging into the Pill by around 10:15am, and out and on our way back again by 11am latest. Our last chance to retrieve from the slip at Lydney would be no later than 12 noon. If we missed that, then we'd stand the prospect of being sat there in the drying mud waiting for the next tide around at 11pm, with the membership of Lydney Yacht Club laughing at us in, shall we say, "sympathy" as it was their monthly Club Night and they were planning a wine and cheese evening that night in the Clubhouse. 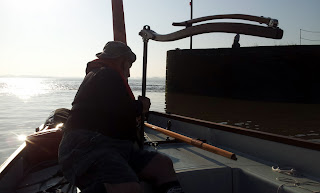 In the event, despite my oversleeping, we arrived at Lydney Harbour and launched in good time. It quickly became apparent that the "lighter and building" part of the forecast meant next to no wind to work with however, so it wasn't long before I capitulated to Dad and we deployed the engine and motored up.

It was a picture perfect morning, slightly hazy and warm. Despite the still air, the river still threw up its typical maelstrom with the surge of the flooding tide. The sharp chop and usual whirlpools were there over The Ridge Sand off the old lock at Sharpness and around the submerged footings of the old railway bridge. Then, past Purton and Waveridge Sand, offshore from Slimbridge, the river went glassy and flat over Frampton Sand until it hit the channel that divides Frampton Sand from the Noose. There, in a line from around Brimms Pill towards Middle Point, the water surged up into a standing wave of over a meter, stretching three quarters of the way across the river, foaming and roaring like a chocolate serpent. 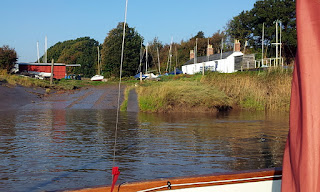 Beyond this, over the sands of the Noose the water undulated with the backwash of the tide hitting Hock Cliff and the banks of Fretherne. Despite spotting our transit on the far bank by Awre, we managed to fixate on the view of Frampton's church tower and initially overshot the mouth of the Pill. Making our way back to it was easy enough despite the flooding tide thanks to the the eddy created by the top of the Noose and we entered the Pill pretty much on queue a little on the back of 10:15am, to be greeted by Brian Bailey waiting for us on the bank. 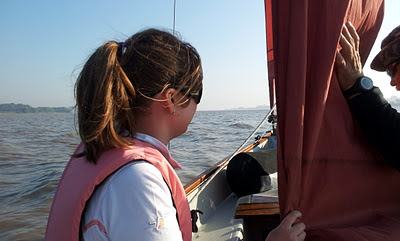 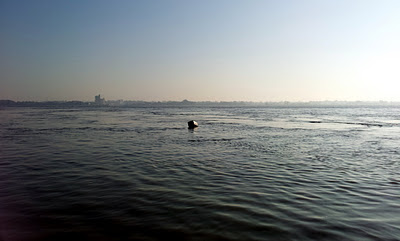 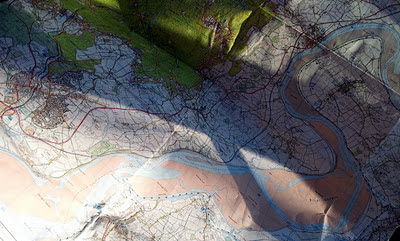 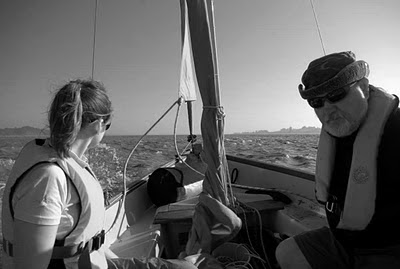 Brian and a herd of bemused cattle watched us guide the lugger up the narrow Pill using the sweeps as poles to fend off from the bank and keep the boat straight in the channel. At the final bend before the slip we pivotted the boat (and I'm going to maintain that this was ENTIRELY intentional, had nothing to do with loosing control to the pull of the tide, HOWEVER ELSE it might have looked to all other onlookers - though I'm not sure even the cattle are daft enough to really believe me) and we then reversed up the remaining channel to lie against the grass slip and wait for the turn of tide, lamenting the fact that we'd left the coffee flask back at the car, and nattering with Brian about plans for future adventures. 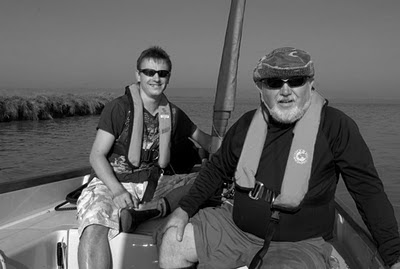 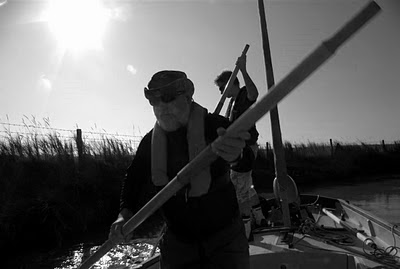 Once the tide turned, we guided the boat back out with the sweeps, giving Brian a ride to the mouth of the Pill where we deposited him on the bank and said goodbye for another year. The trip back was glassy smooth; unexpected given the forecast wind which never really materialised. The only tension came from the engine failing intermitantly. Whilst we were always able to nurse it back into life, we couldn't keep it running reliably, so in the absence of any wind had the continual threat of having to row back hanging over us. 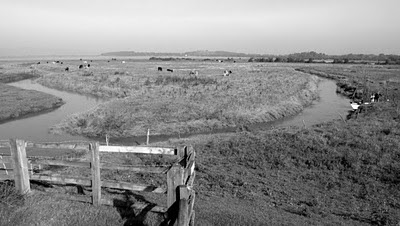 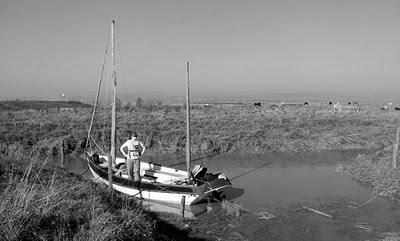 In the end, the engine didn't let us down and we arrived back at Lydney safe and sound, retrieved without incident, stored the boat away for the following day's planned adventure and were on our way home by lunch time. H and I then headed off to Frampton to rig the Enterprise and spent the rest of the afternoon practicing our roll tacks in a gentle breeze around the sailing club lake.

It was, overall, disappointing that we weren't able to sail the whole thing in the end, but still a great morning out on the river, with gorgeous views of the Severn, a warm sun on our backs, good company, and good coffee and cakes once we got back to Lydney. As Dad said later, with what we've experienced of the estuary so far [and to be fair, it's never the same from trip to trip or tide to tide] you just wouldn't be able to credit your imagination that the river could ever look like that on the ebb, glassy, balmy and calm. And so easy to forget [to your peril] that you've still got six knots of tow beneath you, flushing you out in the direction of the Irish Sea.

We'll definitely be back to Frampton Pill again next year. Hopefully with a bit more wind and a few more boats for company. 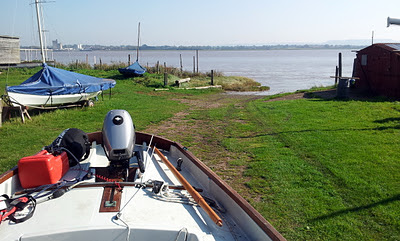 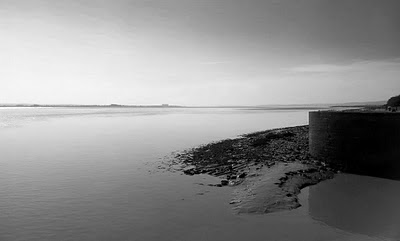