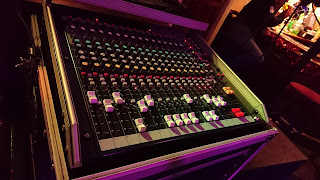 Thursday evening. A gig at The Dolphin in Oldland Common. The new sound desk managed admirably, after we blew up the old one midway through the last gig. Not being terribly consumer-minded, the furore we've seemingly tried to import from States-side surrounding so-called "Black Friday" has left me slightly bemused and totally disinterested the last couple of years, although I did note in passing that all the sound and fury and supermarket violence of the idea's debut last year appeared to not materialise again this year, thankfully.

However, consequent to the timing of our above mentioned kit failure at the end of October, the replacement sound desk, a Soundcraft Spirit FX16 was on offer for significantly less than half price when we found ourselves looking last weekend.

Friday. An arbitrary day off work due to an excess of leave owed and the approaching end of the year.

Woke up Friday morning without a plan. Looked at the forecast and agreed with Dad that with gusts of F5 & 6 in the offering it wouldn't be sensible to sail.

Decided to take Lilly for a walk, and somehow ended up in Portishead with her so we went for a walk along the foreshore. The water looked lovely, albeit in its inimical muddy, Bristol Channel kind of way. Kept thinking I'd made the wrong decision not to sail, and then had to keep reminding myself that it only looked nice because we were sheltered by the lee of Battery Point and Portishead's headland. 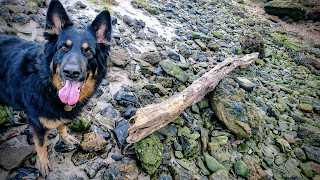 We came across a very large tree trunk lying on the pebbly shore. Interesting, in that it wasn't a permanent fixture, but a not untypical example of the flotsam and jetsam we have to be mindful of avoiding when we're out there sailing. It's very obvious and easy to avoid in a calm, but you never seem to notice the stuff when it's blowing old boots. But as Huw of the yacht "Karisma" has pointed out a number of times, it must all still be there, lurking just beneath the turbulent surface. 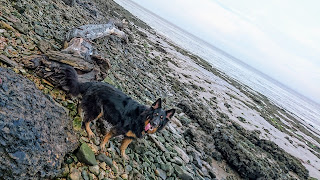 By happy accident, Dad had ended up down in Portishead Friday morning as well, so met him by the lifeboat station and wandered back to check on the boat. Working out how to get a slightly anxious 40kg German Shepherd aboard was a bit of a puzzler for a moment or two, then I put Lilly's ball up on the coach-roof to free my hands in preparation for trying to lift her bodily over the rail, at which point, in her keenness to follow her ball come what may, she solved the puzzle for herself and wriggled her way aboard beneath the guard wires. 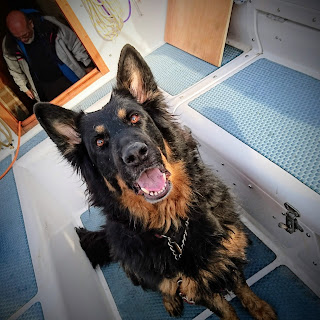 She sunned herself in the cockpit for a bit, a little nervous at first about the strange environment, but adjusting quickly enough, whilst Dad and I pottered about the boat with odd jobs and ran the engine for ten minutes. Then we retired to the pub for a late lunch.


Saturday was a washout. The heavens bucketed down. Started off well with an hour of karate in the morning, but then left a dozen promised jobs around the house undone and generally achieved nothing through the rest of the day until, domestic god that I am not, I cooked supper for everybody Saturday evening.

Sunday, and blue skies returned. Raced Buffy with Ben as the tides were all wrong for sailing out of Portishead with Dad, although in hindsight we could've gone down-channel and back for a few hours between tides; an opportunity missed. Not much wind at Frampton again, but much warmer than the week before with the temperature up to around a balmy 12C. After last week's cold-snap, I think the odds of snow at Christmas are lengthening once more. 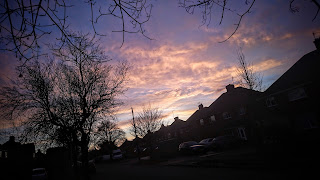 The first race felt much better than its equivalent the week previous, but the result was much the same, with our boat finishing 6th out of 12. The last thirty seconds of the race were a nail-biter however.

We'd been chasing our friend John in his Solo for most of the last lap, and in the last minute, both of us running downwind, Ben hardened up to overhaul him but he headed up aggressively to fend us away, as you'd expect. Ben then sneakily ducked hard, the tip of our bow missing the trailing edge of the Solo's rudder by no more than fractions of an inch. And as we did, there was just the slightest increase of pressure in the light airs, enough to carry us clear ahead as the final gun went before John could bear back down, sounding the end of the pursuit and finish of the race.

It was theft, pure and blatant. But it was lovely.

The second race went well, what little wind there had been through the morning dropped away to a glassy drift but we kept Buffy moving and finished a very clear 2nd place out of the 8 boats racing in our fleet.

Got home about an hour before sunset. Walked Lilly and then enjoyed a game of ball in the park with Jack as the sun went down and dusk set upon us beneath a pink vanilla sky.
Posted by tatali0n No comments:

Sunday was a chilly one.

It read -2C on the dial as I scraped the frost off the car. We drove to the club half expecting to find the lake iced over, but arrived to discover the water, on our windward shore by the club house at least, quite liquid and ice free and a small collection of fellow enthusiasts by the lakeside rigging their boats to race.

I was sailing with my eldest son, Ben, so had the pleasure of crewing whilst trusting him to the helm. He's far to big and clumsy these days to be entrusted to the front of the boat.

Two races were scheduled, the first a pursuit, and the second a class fleet race.

The pursuit didn't go well. Annoyingly, we neglected to tension the jib before launching and didn't spot our mistake until we'd started and were half way up the first beat wondering why on earth we couldn't point up into the wind at all. On an Enterprise rig tension is achieved with a highfield lever at the bottom of the mast. One crew member hangs on the forestay to take the pressure out of the rigging with their body-weight whilst the other pulls the lever on. Obviously this isn't possible on the water, but we managed to brute-force the lever directly with a combination of both mine and Ben's weight combined.

I can still feel the bruising from the experience in the bones of my hand, but needs must.

It was an indifferent result. Despite the forecast promising a F4 gusting 7 (off Portishead at least, I'd neglected to check the local forecast for Frampton) the winds on the lake were easterly, light and fickle. Ben's least favourite conditions. His over-enthusiastic roll-tacking almost capsized us twice, which he quite unfairly tried to blame on me. The boat is still leaking around the centreboard case; this, along with the two near missed capsizes meant that I spent an inordinate amount of time in the bottom of the boat mopping icy water out of the bilges with a sponge, there being nowhere near enough wind to get the auto-bailers working. 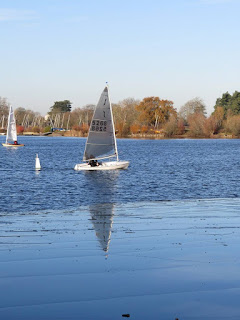 At least the sun was shining. It was, in fact, a gorgeously pretty day if you could just grit your teeth and bring yourself to see it past the chilblains in your fingers.

We finished the first race an inglorious 7th out of 13 boats.

The second race, which in the handicap fleet saw us competing against an array of Toppers, British Moths and a Mirror, was an altogether better affair. The wind picked up a little, but still remained fickle and unreliable. The start was a chaotic jumble, the line possibly a little too short for the number and variety of boats competing in our fleet. Ben crossed it well however,  screaming "Starboard!" at a poor, hapless Topper trying to duck around everybody suddenly in their way (sorry Hannah, the boy's an inconsiderate ass), and moving as best we could in the light air on starboard, closest to the committee boat end as the starting gun sounded, giving us a free choice as to when to tack off to port.

I can't remember if we beat everybody to the windward mark, but it felt good and set the tone for the race to follow.

We sailed well together, the "practice" of the first race put firmly behind us. We broke out into the front of the fleet early enough, and stayed clear ahead of the Laser and Solo fleets throughout so they didn't foul our air. We lapped the Mirror and one of the three Toppers fairly early on, and inextricably drew away from the British Moths; by about halfway through we'd put the necessary three and a half minutes between us and them that we needed to beat them on handicap.

In the end, we caught one of the two remaining Toppers, but the final Topper, with Sue at the helm, stayed teasingly ahead of us throughout to finally beat us on handicap with a little over 30 seconds of adjusted time to spare, leaving us in 2nd place out of the 7 boats racing in our fleet.

It was a good race though, and lovely to be out on the water with Ben.
Posted by tatali0n No comments:

But not quite Frozen.

Did have to scrape thick frost off the car before we drove over, and did have to break the ice off the boat cover however.

Not anywhere near the wind that was forecast. Again. 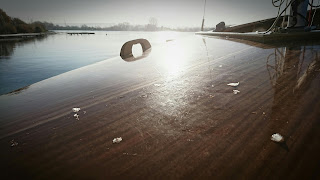