After that ever so slightly self-righteous rant about the injustice of Google declining to continue to support my favorite toys (if it doesn't come across through my typing, please understand that I write this totally tongue-in-cheek) I'm reminded that I played around with Instagram again recently.

I used the app a lot when it first came out, only because the lens on the camera of the phone I had at the time was damaged, blurring every shot I took, so using the Instagram filters available then made the pictures worth taking.

Some old examples, just for the fun of it.

The first was, I think, my brother-in-law's birthday party in July 2012. He was playing keyboard in our band at the time, so naturally we turned it into a gig: 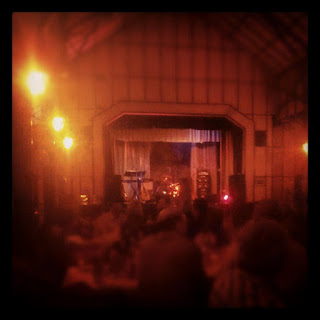 And the second, on stage before a wedding gig, in May of that same year: 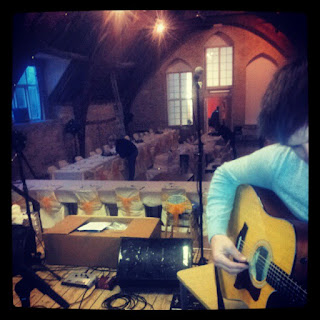 And third, the lake at Frampton, which would be obvious from its absence if I didn't include it: 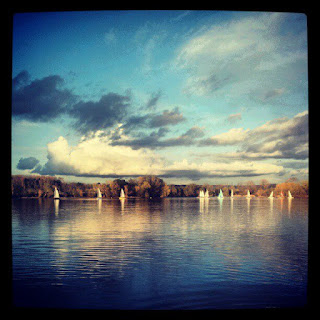 Actually, I'm going to include a fourth, because I've covered most of the other significant parts of my identity in the first three so it would be churlish not to complete the picture with Lilly and her mum, Jaz: 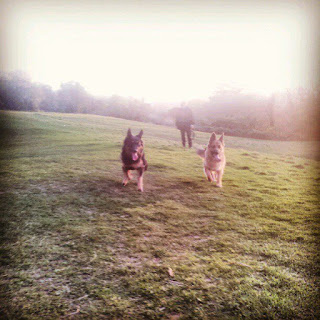 And that theme segues nicely back to my most recent foray into Instagram territory, as my favorite snap is Lilly, albeit four years later than in the above (but not a lot changed). It looks like she's reaching out to me, but she'd actually dozed off in that position, with her left foreleg stretched out like that. She briefly awoke, opening her eyes as I moved to take the shot, then confirming I was going nowhere, dozed straight back off, foreleg unmoved: 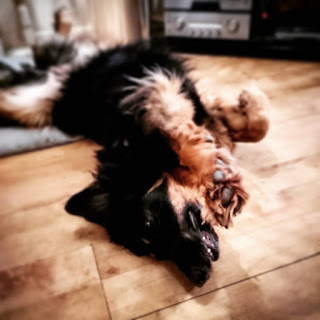 The sophistication of the post-processing options on Instagram have increased significantly since I last went there in 2012. I don't know how much I'll carry on using it, but I might. Thing is, I do prefer tweaking pictures on the big screen of my PC. The little display of even my most recent phone camouflages so much detail with its lack of scale.

In wandering away with all of the above, I almost forgot the other reason for this post.

We did sail on Sunday. I managed to pick up a bug from somewhere, developing a bit of a temperature and a cough by Saturday night, but a text message to Hels asking if she was sure she wanted to sail returned a very define, very prompt "Yes!"

In truth I didn't need that much persuading, all though it was a struggle dragging myself out of bed Sunday morning as I didn't sleep especially well; a weird, feverish dream kept waking me up, quite strange, and despite going to bed relatively sober, I felt hung-over when I finally awoke to the alarm.

I got to the lake in good time, but in view of the forecast, the fact that I was under the weather, and Hels was a little rusty having not sailed with me for quite some time, when a friend offered to lend us his cruising main, we gladly accepted, effectively reefing Buffy down into the "social sailing" fleet.

In fairness to my caution and trepidation, when I arrived at the Club everybody else was wandering up and down the shoreline saying to each other "Are you going to sail?" or "Have you seen the forecast?" or "It's supposed to get much worse...." and words to that effect.

I don't know why they do it, except it's all part of the ritual. The only time I've ever known them to not actually go out was after they'd reefed down from their Lasers to their kids' Toppers, and even then had been forced to rig the boats on their sides because they couldn't raise the masts in the wind.

So yeah, they were always going to sail. And, I guess, so was I. To be fair, had I realized somebody was going to be drifting around with a camera, I might have even resisted reefing down to the cruising main.

Credit for the video and commentary  rests with my fellow Frampton club-member Mark Smyth who, along with Richie Wakefield, valiantly volunteered to man the safety boat whilst the rest of us went out to play. Although (and again, this observation is very tongue-in-cheek, as you can no doubt tell from the tone of my type) perhaps the offer was less about our safety than it was about securing a better platform from which to enjoy the entertainment:

I've long been a fan of Google's Picasa. Not so much for the album management, but the tweaking and editing functions offered.

After dropping my phone on the floor of a Cornish pub one weekend away with Dad, and thus loosing all the photos I'd taken of a misty afternoon's sail from Fowey to Polkeris and back, I'd also become a fan of Google Photos, and in particular, the backup feature.

Then I discovered the editor they included with it, and quite fell in love with that.

However, Google is a law unto itself, in so many ways, and some months back they dumbed down the online editor considerably, to my sad disappointment. Not to worry, I still had Picasa.

I can't really complain. All this stuff was for free anyway. Which I know makes me the product, but I had no issue with that. Everybody's using somebody somehow. The trick is to get back more than you put in.

On the bright side, Picasa at least is off-line, so will continue to be functional for as long as it runs in whatever operating system I have installed. Which is currently Windows 10, on the new laptop at least, so I'm future-proofed for a bit.

Well, no. Scratch that. It's just software. And in this interconnected age there are always other options, whereas every friend, old or young, longstanding or new-found, is a unique treasure, irreplaceable in the mark they make.

But it is a disappointment. I've grown to like the pictures I take. I wonder that I might like them less if I can't find a replacement of the same potential.
Posted by tatali0n No comments: 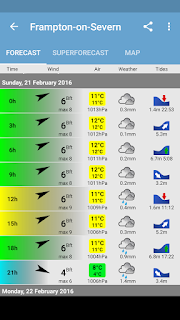 I have crew to race Buffy on Sunday! Hels seemed almost as desperate to get on the water as me. Only one race, starting at 1100. Something tells me she hasn't looked at the forecast.....

Never mind. What she don't know can't hurt her. Sort of. In a way. She'll be fine. 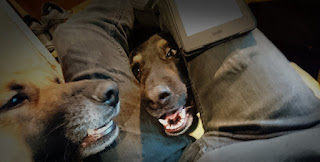 I am enjoying the new phone. The camera is lovely, and the editing software has some nice new whistles and bells.

Weather is rubbish. Didn't sail last weekend. Did head down to the boat but looking out of the dock mouth straight into the teeth of a very strong north easterly, the water was stacked with rank on rank of foaming waves crashing straight in at us.

Roughest I've seen it looking out from the lock, but that was as much the wind direction than anything else. Normally, with the wind in the prevailing south west, you don't see the chaos till you round the breakwater and it's too late to turn back.

Had hoped to sail to Cardiff this weekend, but the forecast has again cut up very rough. If I do get the chance to sail, it'll only be with the Enterprise on Frampton lake. If I can find crew to sail with.

Seriously thinking about trading Buffy for a single-hander. With Ben away and Hels distracted, hoping to sail at short notice generally ends in disappointment due to lack of crew.

It's not a reflection on Hels' lack of commitment but on mine. I consistently prioritise sailing Calstar over the Enterprise, only falling back to the latter when weather or tide make venturing out into the Bristol Channel foolish. So I can hardly blame Hels for not sitting around waiting for me to want to sail with her.

"Someone once said we all become photographs" - Dick Durham, Yachting Monthly, March '16

All change this weekend. Upgraded my phone, I have a new laptop, and I've upgraded the laptop with Windows 10. So I've spent most of my time configuring gadgets rather than playing with them.

Reading the latest YM as the laptop downloads and installs yet another essential. Dick Durham's article is especially poignant; he writes about losing his mother recently, and for that he has my deepest sympathy.

The above quote especially caught me. It's so very true.


Got to get ready and head out to tonight's gig in ten minutes. A posh-frocks and bow-tie affair at a local hotel, in aid of the very worthy local charity, The James Hopkins Trust. I'm really looking forward to it.

Was hoping to sail Calstar with Dad tomorrow morning. Windfinder Pro is suggesting a north easterly F5 gusting 6 off Portishead. That's a bad direction, straight into the lock gate, and 1.5m seas with it, which are relatively tall for this neck of the woods.

I have reservations. Then I wonder if I'm just being a wimp. Then I remember I promised myself to take my reservations seriously about such things.

Not so worried about dying or not being able to manage the conditions, Do worry about hurting Dad, or worse (because Dad's fairly robust) damaging the boat.

For the mere sake of a few hours sailing for the sake of sailing.

I sound conflicted, Will see Dad a little later, He's rarely conflicted about such things, so perhaps I'll leave it to him to make the call,

It's not like there's not loads of other stuff piling up for me to do if I can't go sailing.

Maybe I'll persuade Hels to come play with the Enterprise at Frampton?

Time to go get ready for the gig.
Posted by tatali0n No comments:

All the nuts have gone 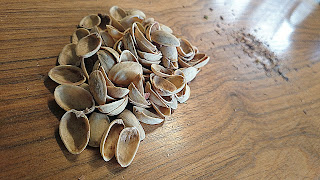 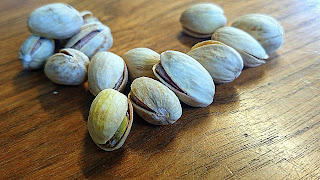 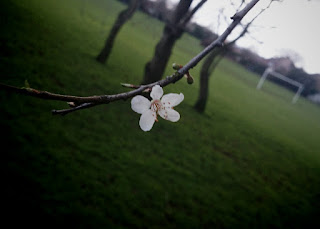 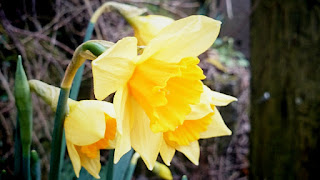