"Do you really need another guitar?"

I think we've already previously established that the answer to that question is always an absolute, assertive "Yes".

That said, guitars are a bit like boats, insofar as I suspect they all look the same to Nikki, so after I "accidentally" found myself in a guitar shop yesterday afternoon, and accidentally came hope with a new electric, by the time she got home herself later that evening the guitar was already hanging on a stand in my den, and the case was stacked up with all the others against the wall.

So the new acquisition has passed unnoticed. So far, at least.

I average around 40ish gigs a year, give or take half a dozen or so. Usually more "give". On top of my other interests and various obligations that absorbs quite a bit of time and effort. For a good number of years, it got so it seemed like I'd only ever pick a guitar up to actually gig or, occasionally, learn something new at a band practice. Though for many years, said band practices have become very infrequent in themselves. We just don't get time.

Then about 18 months ago, I bought an electric piano. Even in a life with as many happy distractions as mine, there are little moments of downtime here and there. Having the piano simply available whenever I had a couple of minutes seemed to change the dynamic. I started playing for myself again.

Which is, of course, why I got into the whole thing in the first place. 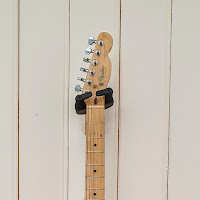 In the fading months of last year, I started leaving a guitar out on a stand in my room. I don't part with guitars easily, so have collected a few over the years. But have always resisted leaving them out; they gather dust, get knocked over, or just simply get in the way. But, consequently, I have half a wall in my room with cased up guitars leaning against it, guitars that haven't seen daylight for years.

I tend to have a particular guitar that I perform with; it'll serve for a few hundred gigs or so, then something will wear out. The pre-amp will start to fail and crackle (that would be the Taylor), or I'll actually wear through the top (the Takemine) or something, and so I'll find a new guitar, and then that will become my new favourite for the many gigs to follow. She's currently a Martin, previously mentioned here I think, and we're still getting along famously together.

But with a guitar out on a stand in my room, I found myself reaching for it in those odd moments. 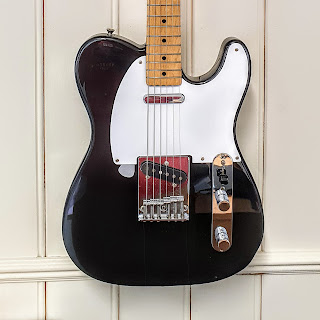 So I've been playing a lot more. Practising isn't the word for it. I don't know that any of this contributes anything towards a performance of any kind. Maybe an open mic night or two away from the band, maybe an odd YouTube video for the fun of it, but it's far from the core of what we do with the band. What I've done the last thirty years.

It's entirely selfish. Which, in this context, is a good thing.


I play acoustic. I've never really understood electrics, and always felt I lack the precision for them and the dedication to correct that. A point my brother (who is also the band's bass player) seems never shy to remind me of if I'm tempted to stray from my familiar, comfortable ground. And there is something, well, visceral, almost percussive about performing with an acoustic guitar that I don't think you can get, or at least I can't, from an electric.

I've been doing a fair bit of recording lately. Recording is very different from performing live.

The technology that lets you record onto a computer at home these days has moved on so much since I last strayed into this area. It's really quite incredible. Almost to the point that, were I starting again from scratch now, I'd probably not bother with a band. I can see why a lot of people don't.

And the computer doesn't snark or get antsy if I dare stray from the comfort zone of my own familiar territory. I've found myself playing with an old Washburn electric (a Mercury II series) that I bought many years ago (and had been in its case since 2014 apparently). The guitar has its limitations. Most of those are, admittedly, the guitarist.

But that led me to thinking that if I were going to start exploring with an electric guitar, perhaps I should find something a little more mainstream, more of a standard? A Fender Stratocaster, perhaps?

Turns out there isn't one available at the moment in either of the two guitar shops in my hometown of Gloucester. But when I found myself in one of those two guitar shops yesterday afternoon, hanging around waiting to give Dad a lift home from the hospital, a very nice man called Mark put an old, second-hand, Japanese Fender Telecaster into my hands, plugged me in to a big amp at the back of his shop and then left me alone for a good long while.

By way of an aside, if you want to sell me a guitar, that is exactly how you do it.

And so, predictably perhaps, when the time came to leave and go pick up Dad, I found myself terribly loathed to give her back.

Thus my newest guitar. A black, second-hand, Fender Telecaster. Made in Japan, her serial number suggests she was made in 1990. Which, coincidentally, is the year I returned to the UK and the year before I first started the band. She's a little the worse for the years, a few cracks beginning to show in her veneer. But aren't we all by now?

I think we're going to get along just fine together.
Posted by tatali0n No comments:

I don't do cards. Not very good with flowers. But do appreciate how lucky I've been. So I wrote her a song. Well, nicked an old folk song and butchered a couple of verses, rewriting them so they were hers.

So I recorded her a song. Yeah, we can settle for that. Though the two verses are all hers.

Naturally, I'm talking about my wife, not my boat.

As is, I find, not unusual for this time of year, I've been somewhat shore-bound of late. Dad and I did have a weekend away with Calstar at the beginning of the month; she'd been out on the hard for some general TLC and overdue maintenance on her mast and had gone back in the water on the Friday.

Unfortunately, the wind was such that the Marina wouldn't let the riggers use the mast crane, and so she, and therefore we, spent the weekend alongside the pontoon beneath the crane, mastless. Which, according to my spell-checker, isn't a word. But it will serve.

The weather was such that we couldn't have sailed anyway. Perhaps on the Saturday, but returning on the Sunday would've been nasty.

So by way of compensation we ate at Dad's favourite restaurant in Plymouth on the Saturday night. We duly arrived at 8pm, spot on time for our reservation, to discover our table hadn't yet been cleared of its previous occupants. The eatery was, as always, packed, so we happily agreed to wander down the road for a pint and come back in half an hour. It's not like we had to run to any kind of a schedule.

The Admiral MacBride was as comfortable an establishment as any for us to pass the time in; it's one of my favourite pubs in the Plymouth Barbican, partly because it's nearest the Marina and I am a creature fond of convenience when it's offered, and partly because it's just on the outskirts of the main drag, so often a little quieter than the pubs further along.

I'm also a creature generally unfond of crowds. Unless, of course, they are there to see me.

Nowhere is really that quiet in the Barbican on a Saturday night. I almost lost Dad to a crowd of of enthusiastic young (and some not so young, but who am I to judge these days?) ladies out enjoying themselves, celebrating the birthday of one of their friends.

However, whilst arguably over-enthusiastic in their revelry, they were not unfriendly. I can't believe Dad didn't enjoy the attention.

A storm blowing through this weekend saw racing at the lakes both at South Cerney and Frampton cancelled. In any case, I was stuck on a First Aid course, necessary to maintain my sailing and powerboat instructor's ticket, so couldn't have sailed anyway. Next weekend I'm on the Safety Boat at South Cerney, so again, no sailing.

That said, the Albacore is currently in the workshop, having some modifications to the rigging done, so isn't likely to be ready in time for the weekend. Although with the forecast (albeit still a long way out) suggesting we might see gusts of up to 50 knots again next Sunday, it's not certain there will be any racing anyway.

If there is however, it should at least be entertaining to be on the Safety Boat.
Posted by tatali0n No comments: