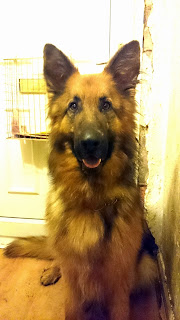 He has a lovely, devoted nature. A big boned lad, he's very underweight from his time astray and subsequently spent in the pound. It's hard to imagine what he's been through; he's got scarring on his muzzle that suggests he's been fighting or has been picked on at some point, but has a complete lack of aggression so I can only think some bastard set another dog on him.

Found in a woods, his microchip traced back to a fellow that said he'd sold him and didn't want to know. With that sorry conclusion, the pound were going to put him to sleep unless a place could be found for him in rescue.

I can't imagine what would have led anybody to abandon him. I'd like to think the best of folk, and put it down to some sort of personal tragedy, but over the last 18 months of being involved in this dog
rescue gig, I've seen both the best and the worst of people, and of the
latter, some of the worst are truly incomprehensible to me. I'd get angry, but it would be a futile waste of energy. Better just to focus on fixing the consequence of the problem as we can't hope to make a scratch on the cause.

But as of a couple of days ago, Ty's world has now taken a turn for the better, and he's got a happy, lucky future ahead of him. It's a privilege to have had the chance to have a hand in that. A great part of this gig is that I get to meet and spend time with an awful lot of gorgeous dogs like Ty.

Though a big downer is inevitably having to part with them.
Posted by tatali0n