A moment of nostalgia, a past crisis of confidence 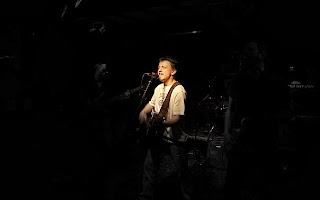 I stopped writing songs some few years ago now.

It was once very important to me. But then we hit a crisis in the Band back in 2004 and out of that I realised it was the performance, not the composing that really mattered. I didn't much care what I had to sing, I just wanted the validation of an audience to listen.

The band, every once in a while, try to persuade me to start writing again. But I think those days are gone. These days we play covers. Anything from Van Morrison through to Snow Patrol. Whatever takes our fancy. There seems to be a market for it. Though there was an equal market for our own stuff, back when I was still writing. We were never short of a gig or an audience, even if it was never going to pay for the mortgage.

That, perhaps, was the reason for my failure making it as a professional musician. What rock star has a mortgage to pay?

Though as far as the writing went, bottom line is that I lost confidence in myself, for many reasons, and got out of the habit. And writing is, if nothing else, a product of habit.

Though for all the crisis of confidence, I still love much of what we wrote and recorded together back then. The band has been going in one form or another since 1992, so there was a fair bit of it.

This song was written in 2001. I remember the year for many reasons. It was probably recorded a year later. It's not the best we recorded, but it's one of the song's I'm most fond of, for many reason.

And now I'm off out to tonight's gig.
Posted by tatali0n