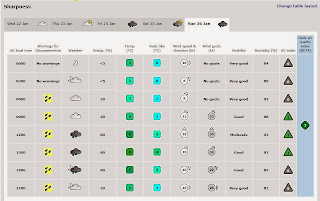 I'm sure I did something very useful with my time last Sunday, but
damned if I can remember what it was. I didn't go sailing. Which means
that the entire bedrock around which I hinge my week was unshackled.

I think I brought some walking boots, in a rare trip to the shops. It
follows that I think I therefore took the dogs for a walk. Almost
certainly in fact. Then I do that every day anyhow, new boots or no. I
know I kept myself busy as busy can be, and didn't have anywhere near
enough time to do everything I set out for.

But no, it all just blurs into mush.

Thinking about it, I think I cooked lunch for my wife and Sam (boy_v2).
But I'm sure that wasn't all I did.

Anyway, point remains, I didn't go sailing. Should've moved boats
around, as I've got at least two boats in, geographically, the wrong
place at the moment. But didn't get a chance. There's an awful lot of
stuff that apparently needs doing when you don't run away to go sailing.


The second meeting of the Frampton Icicle Series is this coming Sunday.
Looking at the forecast from the Met Office, I'd normally be dancing
with anticipation. F4 increasing through the morning. Gusts 6 to 8
later. We never not sail at Frampton because of too much weather.

But we didn't, and quite sensibly not, New Years Day. On the outcome of
a forecast that looked very akin to the one building now.

It would be ideal if the promised blow delayed, just a few hours. Let us
get out on the water, have our fun, put the boats away. Then I'll walk
the dogs in the howling gale-driven rain later.

My usual and trusty sidekick Hels is recovered from her chest infection,
but has other commitments. However, despite my stragegically positioning
the kicker on the boom to try and take her face off with every tack or
gybe on our last venture out for the first Icicle, Patricia has
heroically stepped back into the breach and volunteered to sail with me
once again.


In other news, Buster, my black GSD, took a funny turn last night. Fine
one moment, then just went very shakey and lethargic, took himself to
bed, and the shakey, hang-dog, something definitely not right look as
persisted throughout today. He's an old lad, at eleven years, so
anything like this is, frankly, a little terrifying. Think it's a trip
to the vets tonight so see what's gone wrong.
Posted by tatali0n