Jack is responsible for my needing to crew one handed tomorrow 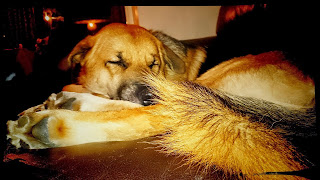 He really didn't mean it. He's a year old, and just  beginning to find his own feet. He's most upset at the new foster, Ty.

I took both for a walk. Jack loves to play fetch. Made the mistake of bringing a ball. Ty likes fetch as well.

Took my own eye off the ball.

The resulting bruising leaves me unable to move my thumb. Nothing broken, including the skin. Might hurt tomorrow, but should be okay for the gig by Saturday night.

By Saturday night I'll have those two playing ball together.

Jack is my wife, Nikki's personal failure, and her "baby". He was born in the Rescue.

Unlike his litter mates, his ears haven't stood up. A critical failing in GSD circles. I love winding Nik up about it. She counters that he's looks so sweet and his flopped ears just match his adorable persomality.

She is, of course, entirely right. Jack is gorgeous and I love him to bits.

But it wouldn't do to give the game away! Jack understands. He's my mate.