Back in July, I wrote about our most recent trip out on the Severn, the weekend before Dad and I took Ondine down to Cornwall. A fellow member of Lydney Yacht Club, Graham Chrisford, took some photos from atop the Breakwater of our launching from the slip that morning and setting the sails, some of which follow below, with his kind permission. 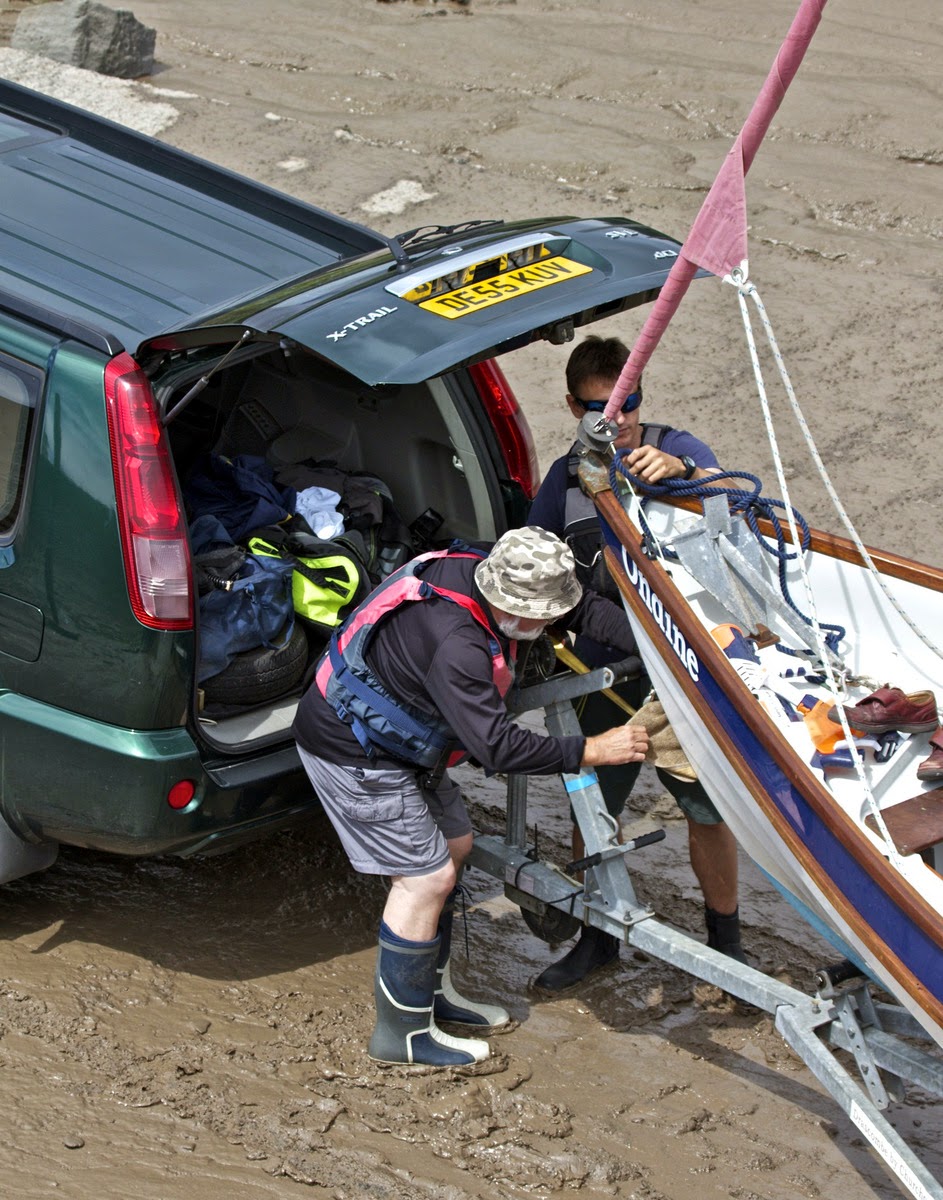 Photos rarely capture the somewhat perilous angle of the slipway. The photo does catch how the lower reaches of it were covered by an inch or two of slick estuary mud, left there by the previous tide. In the photo you can hardly see where the edge of the slip is behind me, and the mud bank begins.

Thankfully it's a bit more obvious on the ground. Step off into the mud, and it'll be up over your knees. 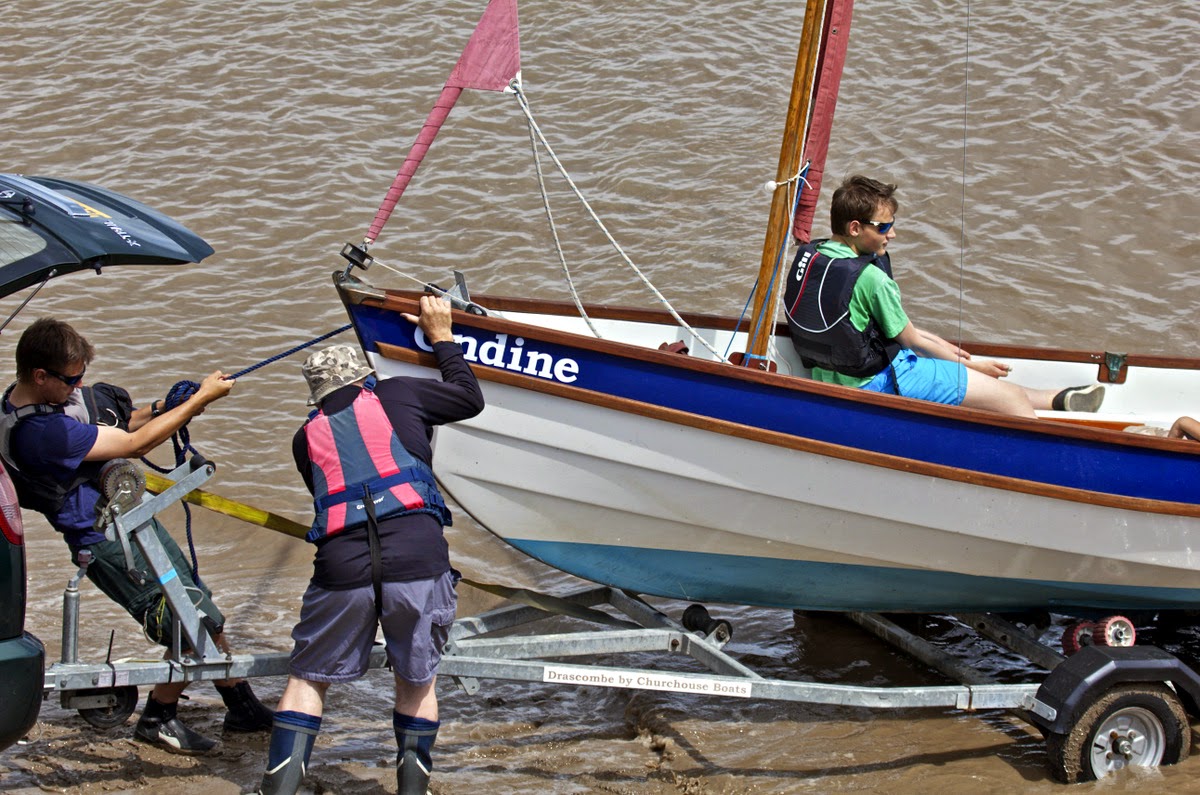 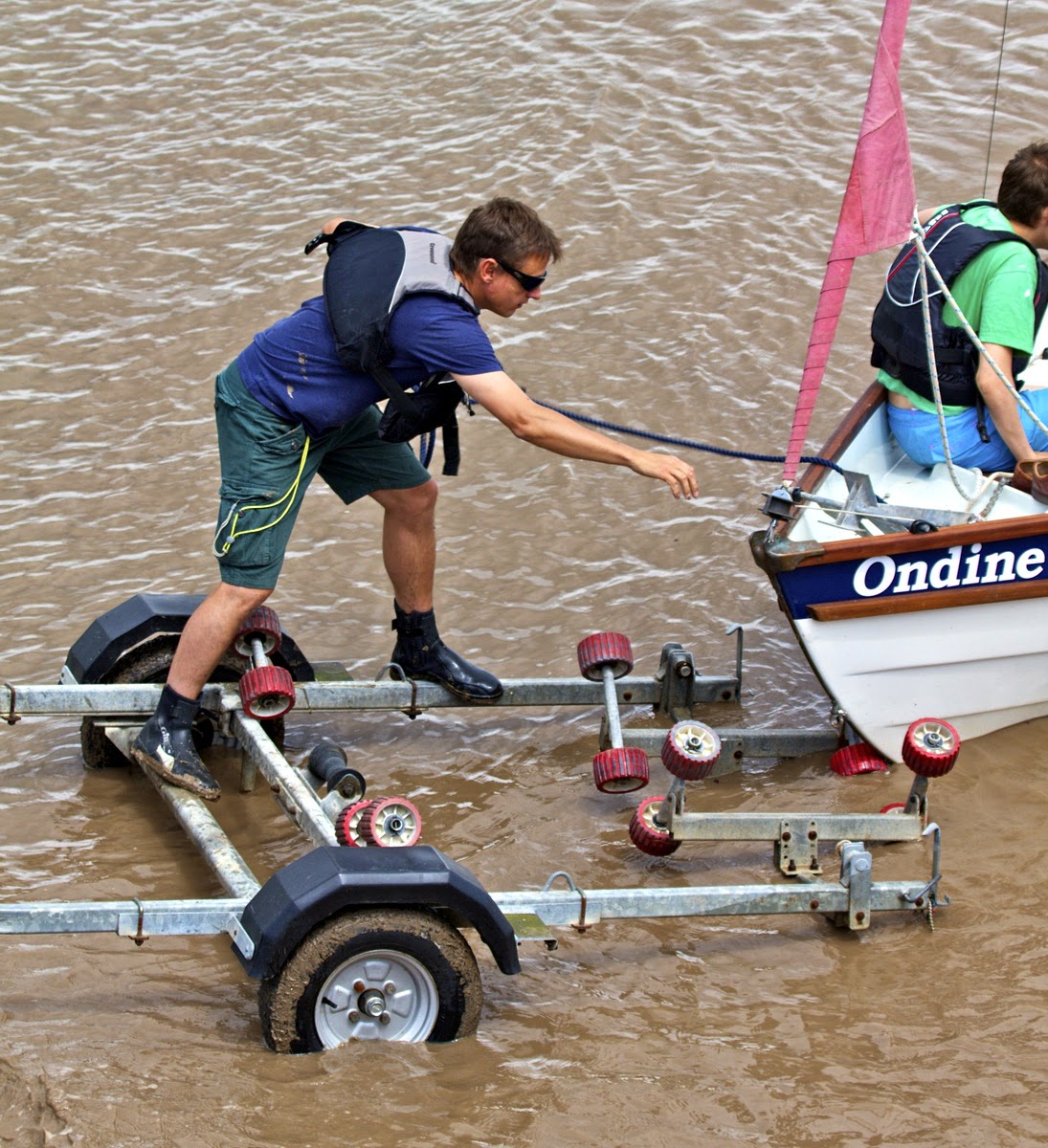 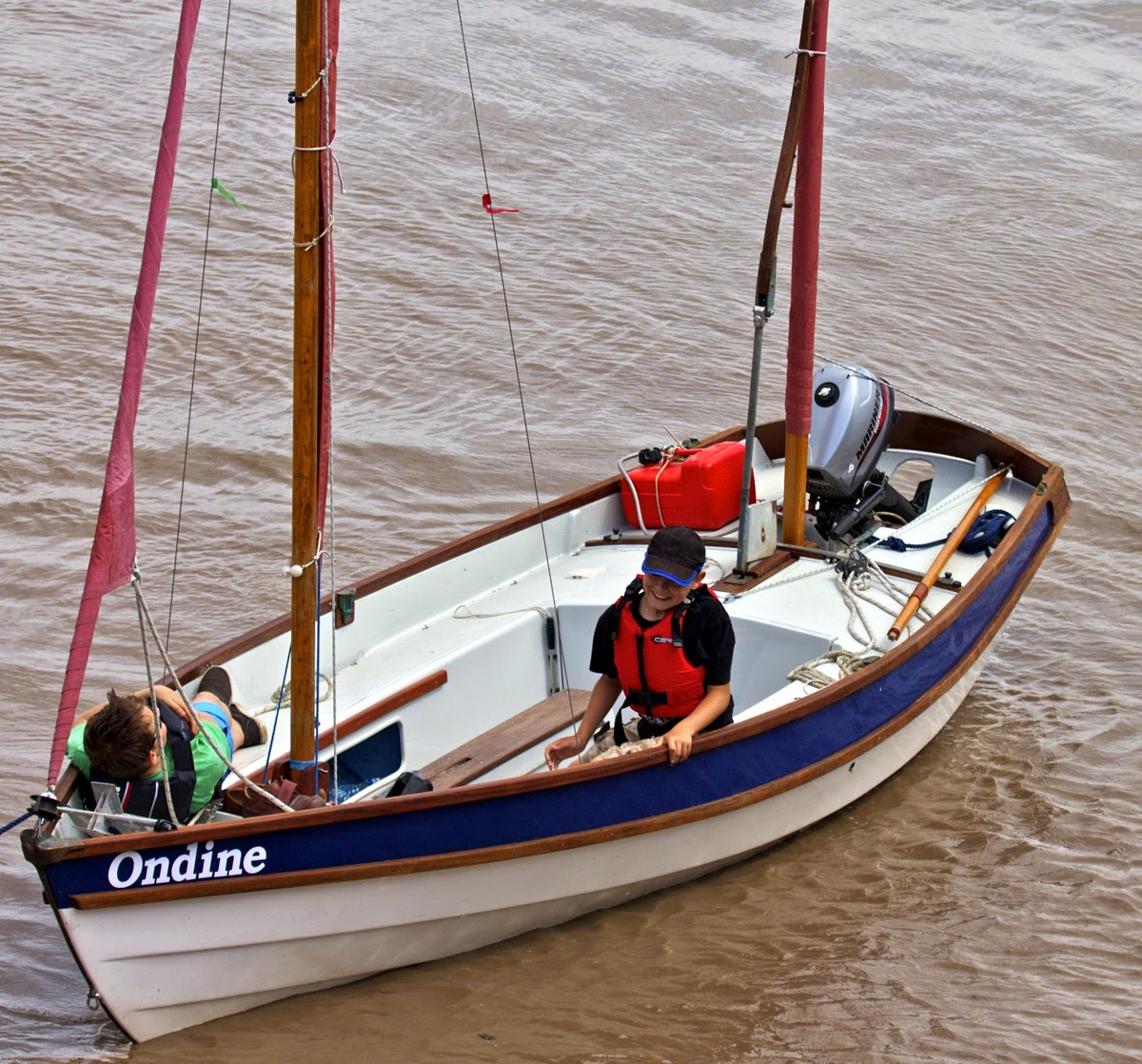 The idea of launching with the kids aboard, whilst not entirely health and safety conscious, was to keep them out of the mud and so the mud out of the boat. Dad and I are both pretty proficient at washing our feet off in the water as we slide aboard. Sam (in the bow) has never mastered this, and Ollie (port side) was on his first ever trip out in Ondine, or under sail of any kind for that matter, so it seemed an unfair expectation.

The real trick was in not letting go of the bow warp as I pushed her off the trailer. It's not something I'd do anyway with 7kts of tide ripping past the breakwater, but with the two kids aboard . . . . Well, have you ever stood at the edge of a really long drop and listened to that voice at the back of your head saying "Go on, jump! You wanna jump! Jump! You know you want to!"? It was a bit like that.

We do all get that same voice, don't we? 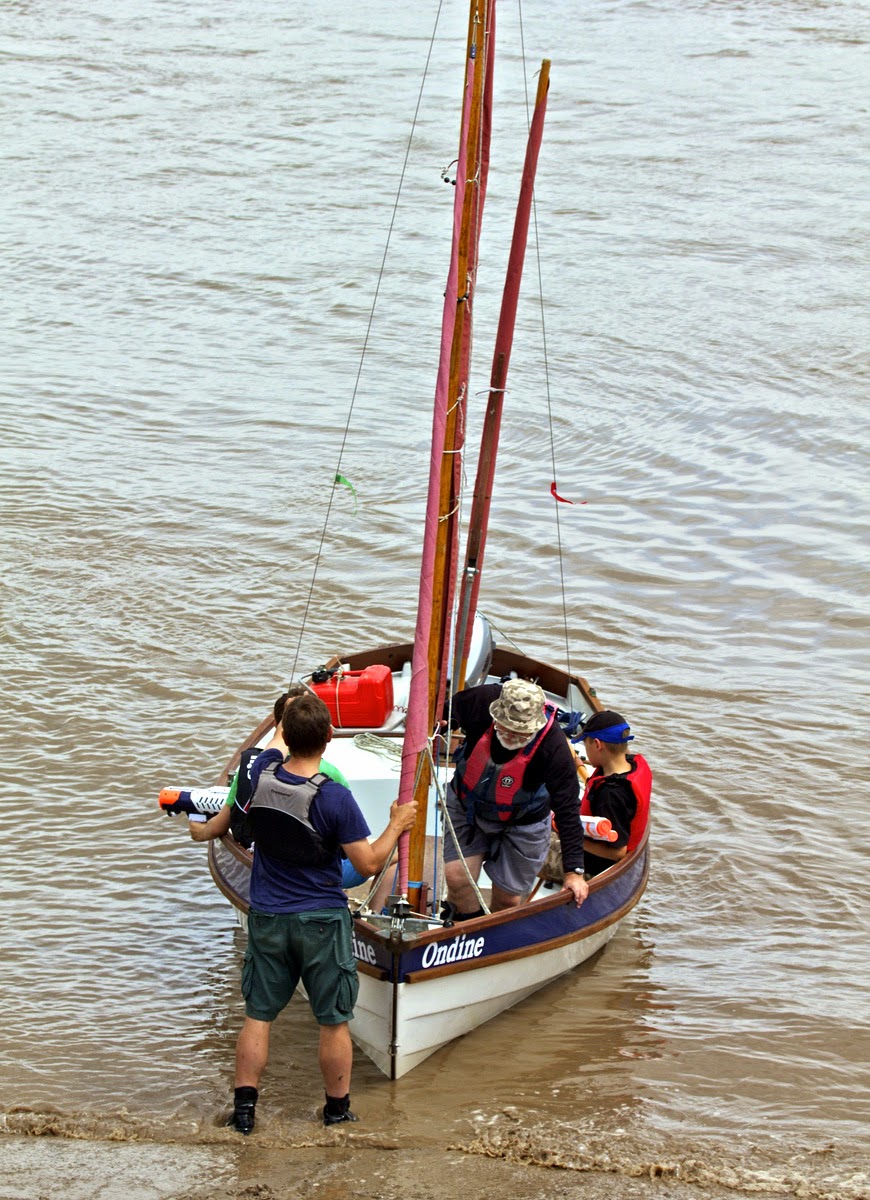 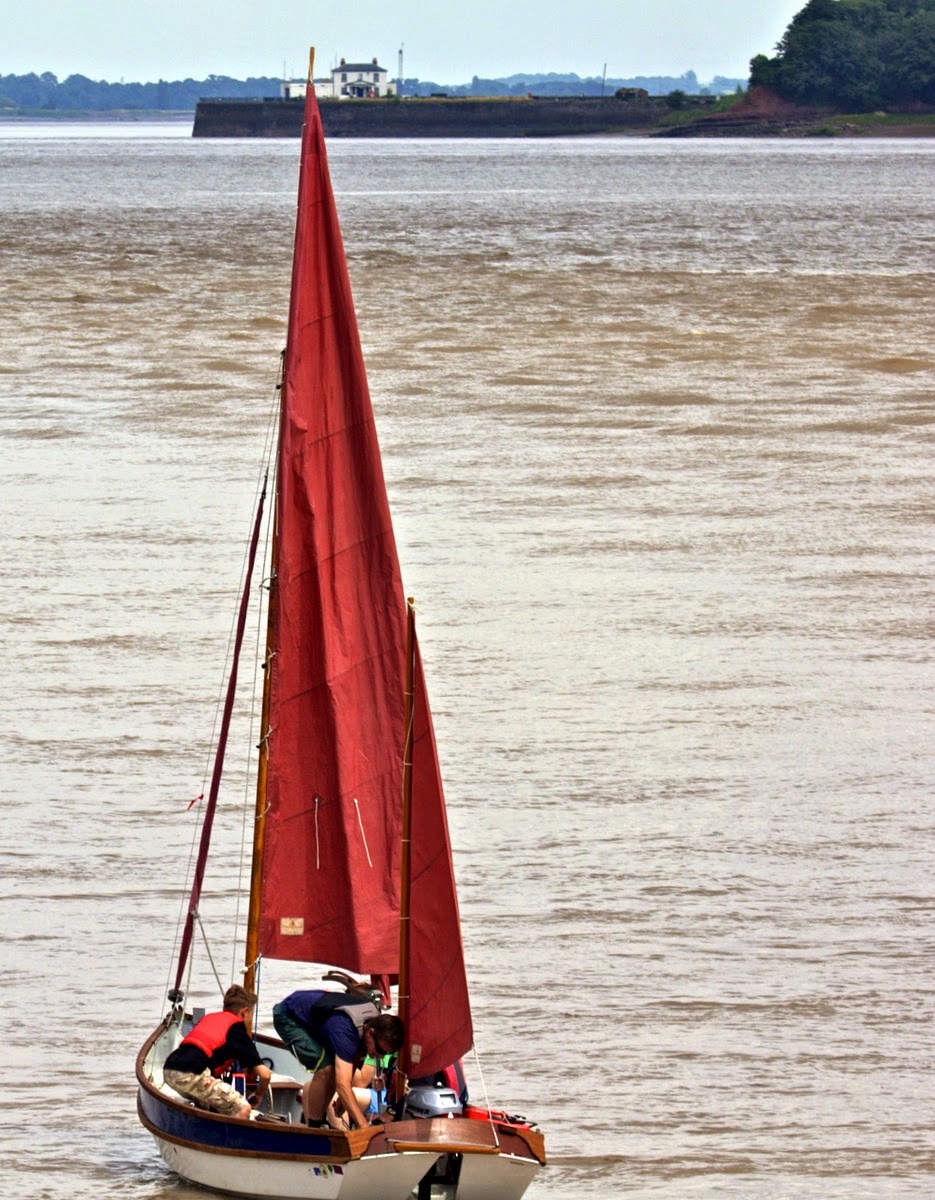 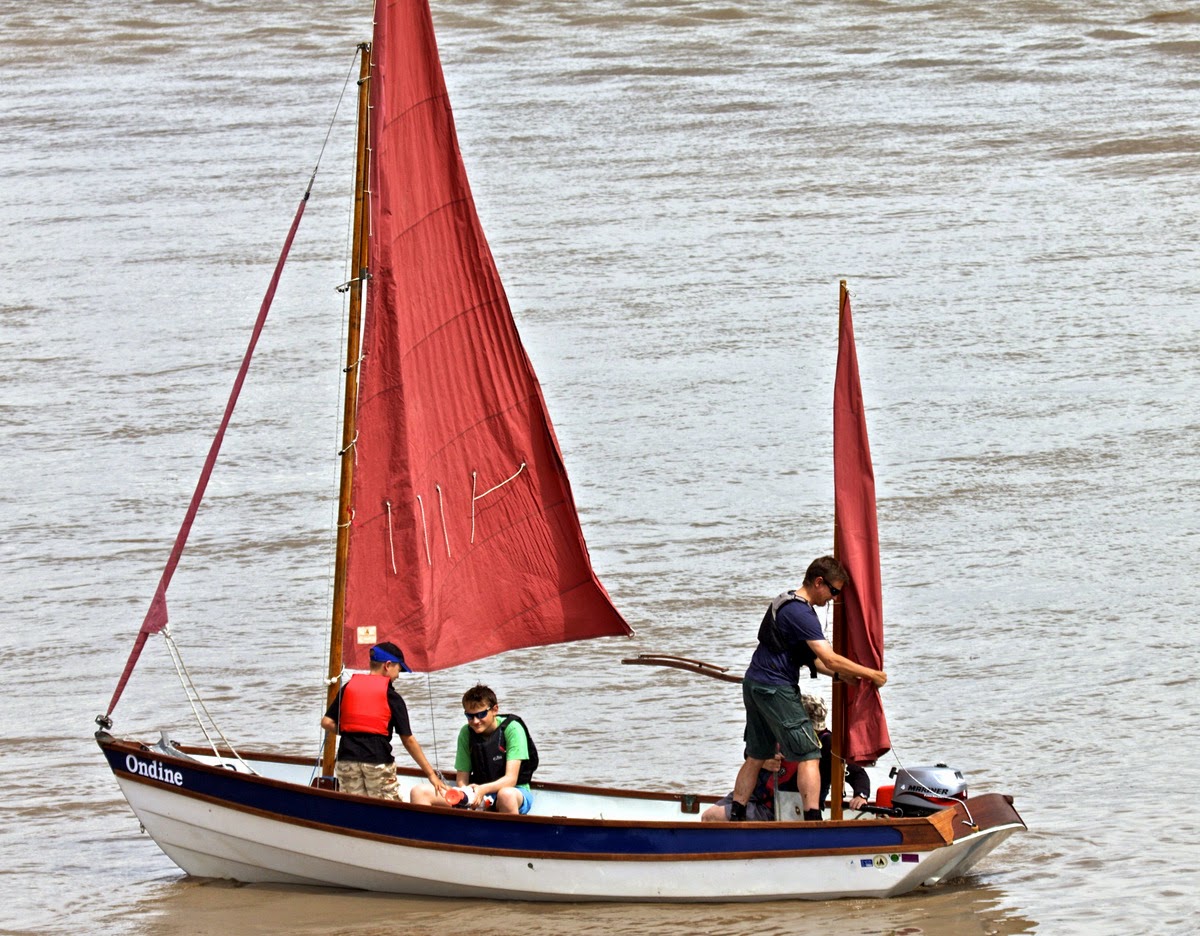 Once Dad's aboard, the launch routine is involved, but pretty fixed in sequence.

He gets the outboard deployed and running, and I jump aboard the bow as he backs out astern into the tide.

Once clear of the slip, which is pretty much by the time I'm aboard, centreboard goes down, deploy the rudder, unfurl the sails, deploy the bumpkin and rig the mizzen. 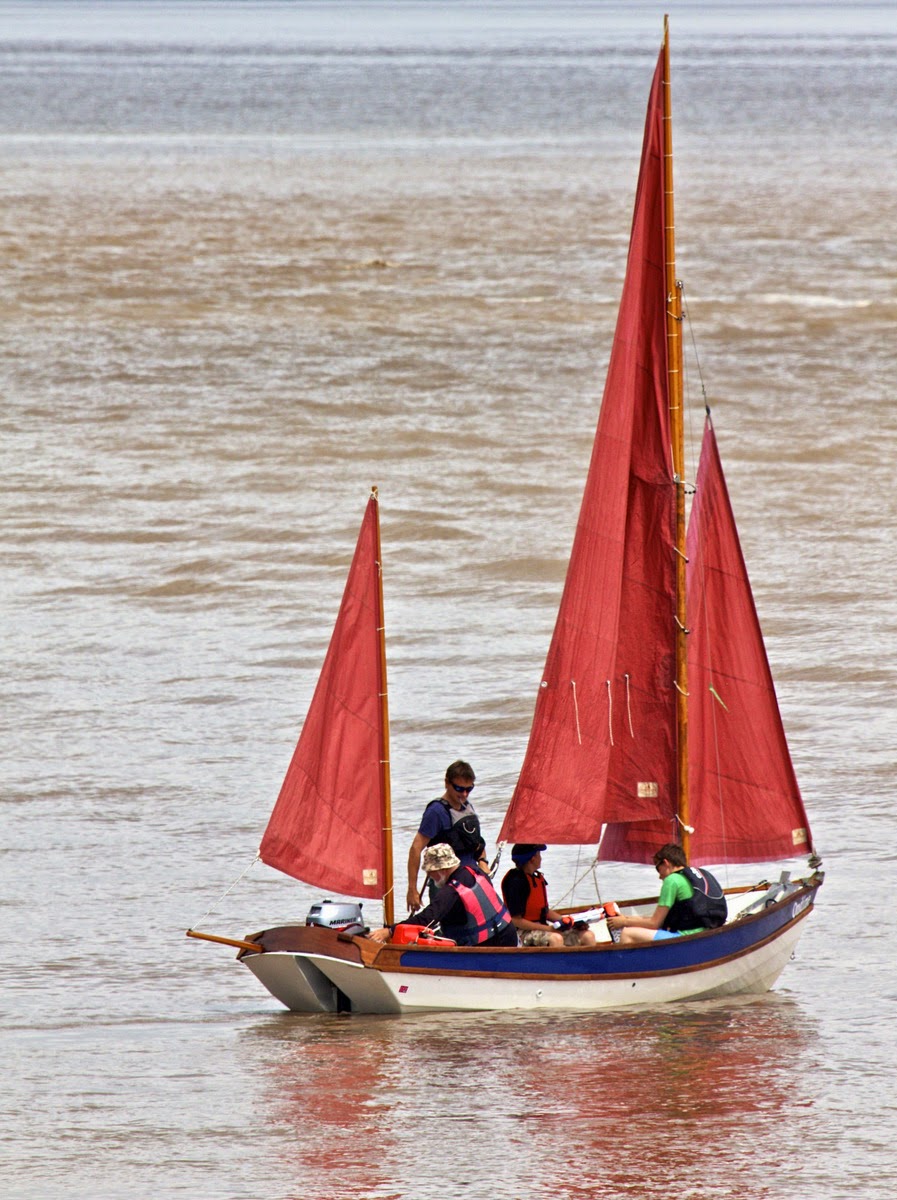 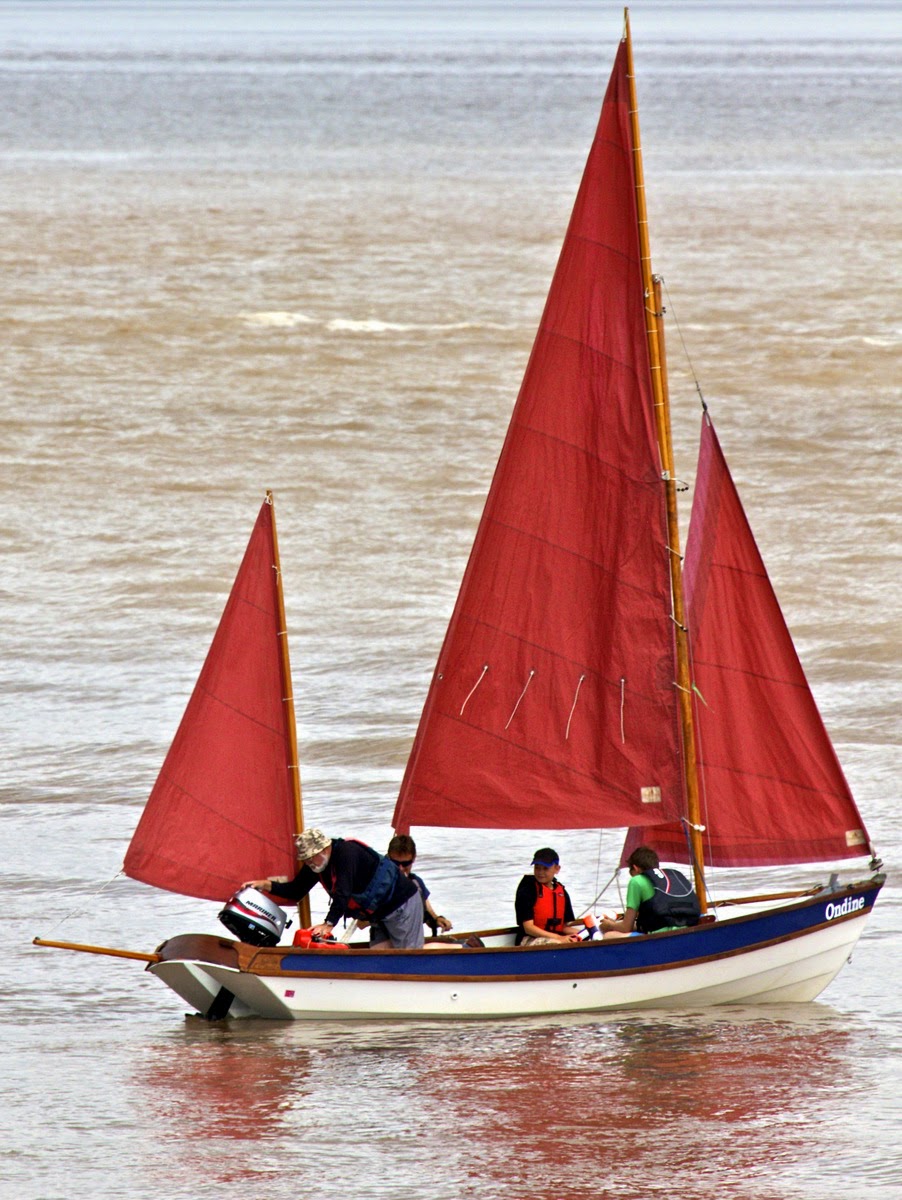 Unfurl the jib, make sure the mainsheet is still free and secure the clew of the mainsail, I take the helm, and, now we're under sail, Dad finally kills the outboard and lifts it clear of the water. 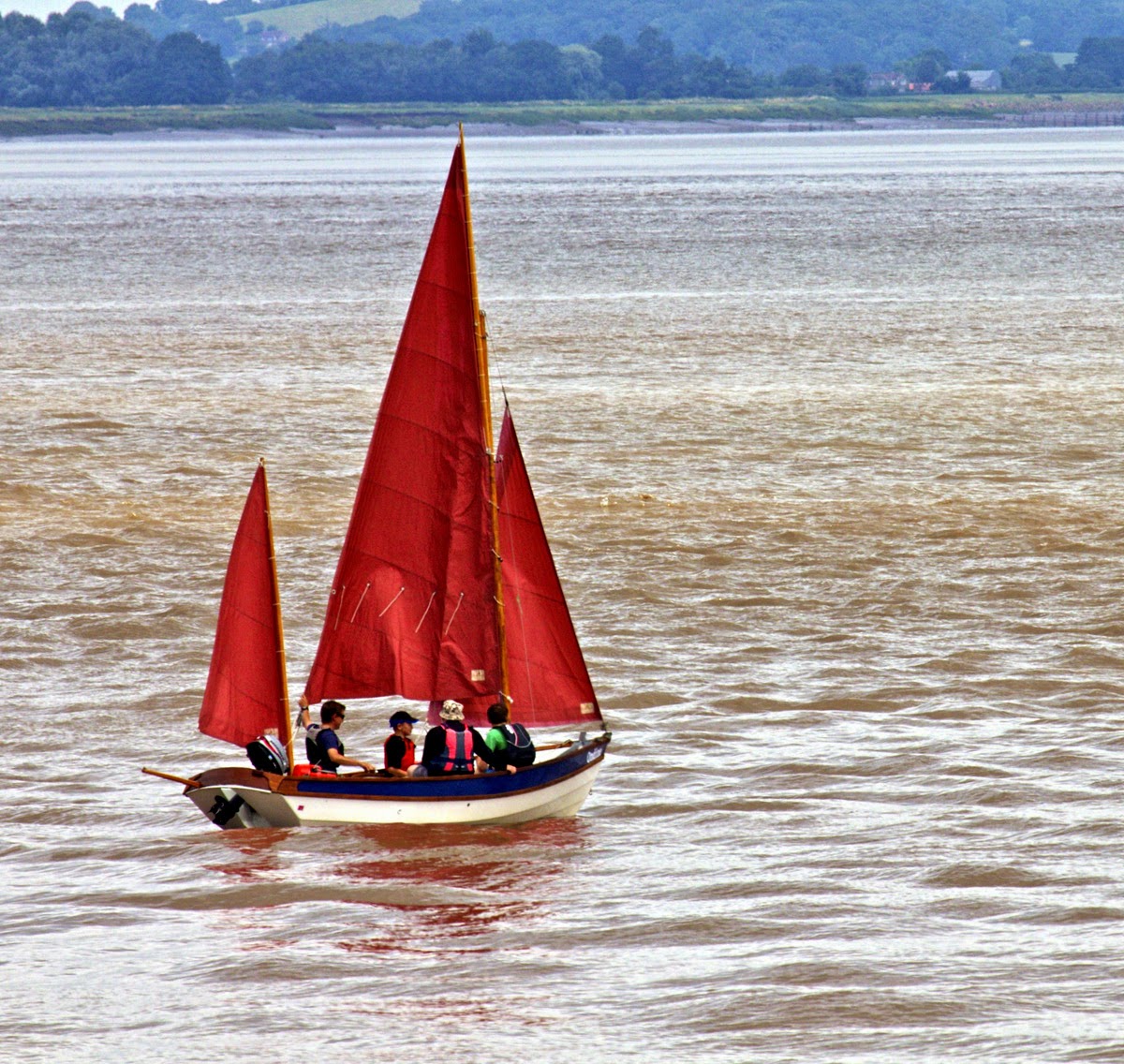 All this only takes a few minutes, but invariably, by the time it's done and I look up, Lydney Harbour is already fading into the distance and the tide has pushed us up and past Sharpness.

Ondine is such a pretty boat.

The cruiser off our port bow is a very unusual sight around these parts. I think they locked out as the tide brought the lock into operation, motored up to the old dock to have a nosey around, then went back into the lock at top of tide to return to the sanctuary of the docks and Sharpness canal. 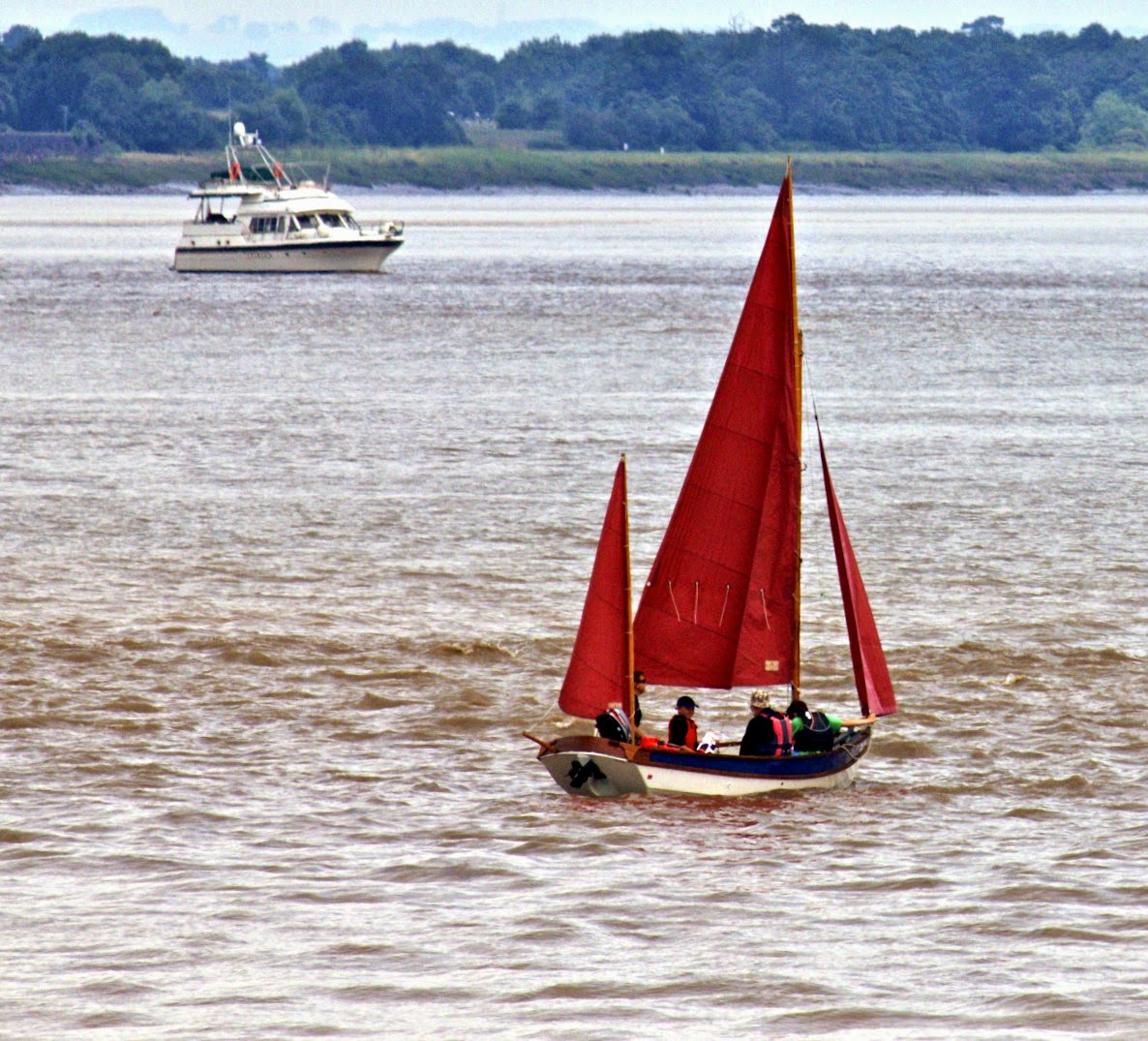