Up bright and early, the house was quiet; even the dogs were too sleepy to do more than roll over in their beds with a half-hearted yawn to see me off. 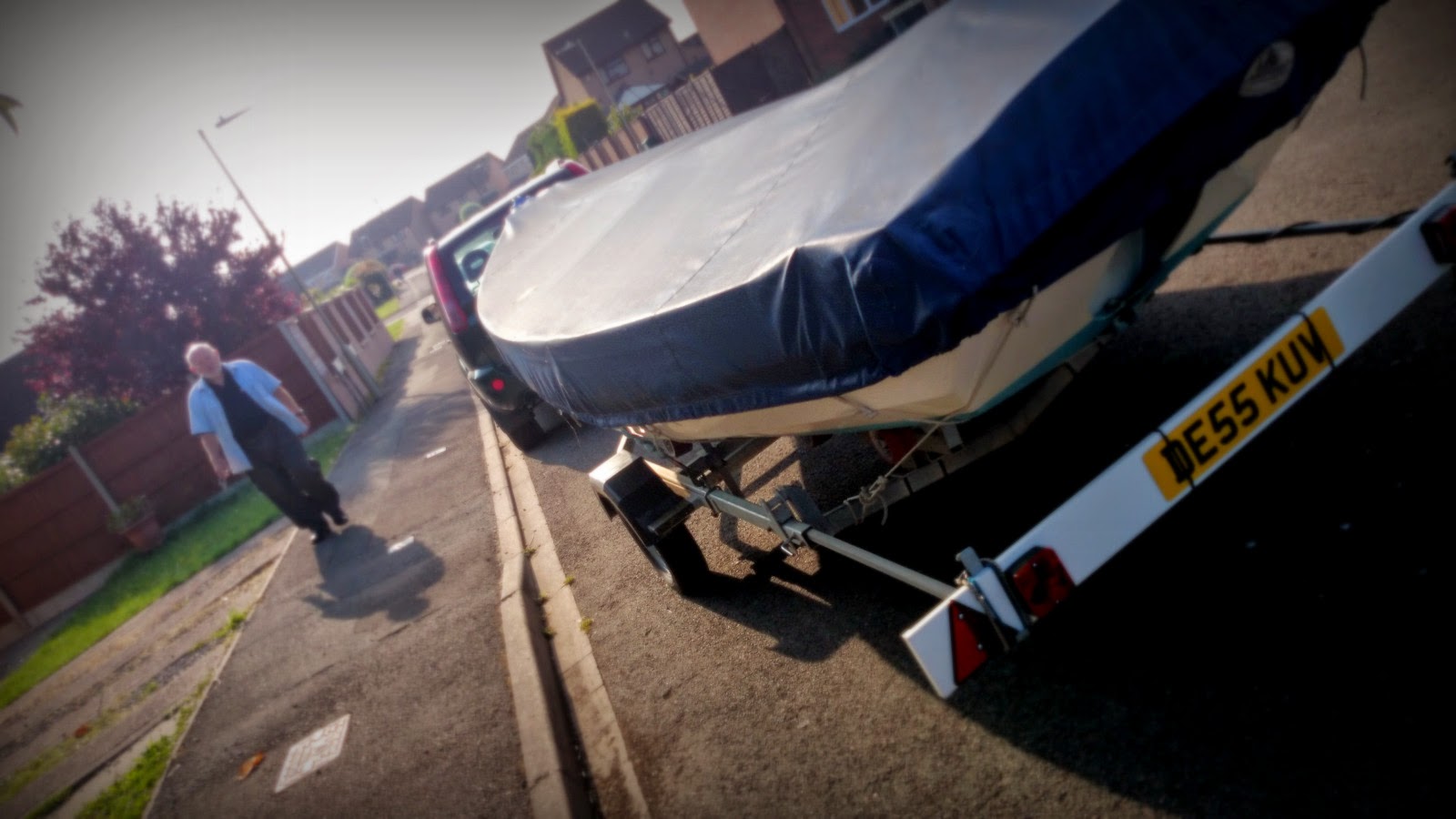 We hooked Ondine onto the back of Dad's truck and headed south. Traffic was light, and the ensuing motorway hours were not too much of an interminable drag. We arrived in Penmarlam around lunchtime, and delighted to find the cafe was still there and in business, restored our stamina with a bacon roll and a cup of tea before rigging Ondine and launching. Blue skies, turquoise waters and a light westerly, exactly what the forecast had promised. 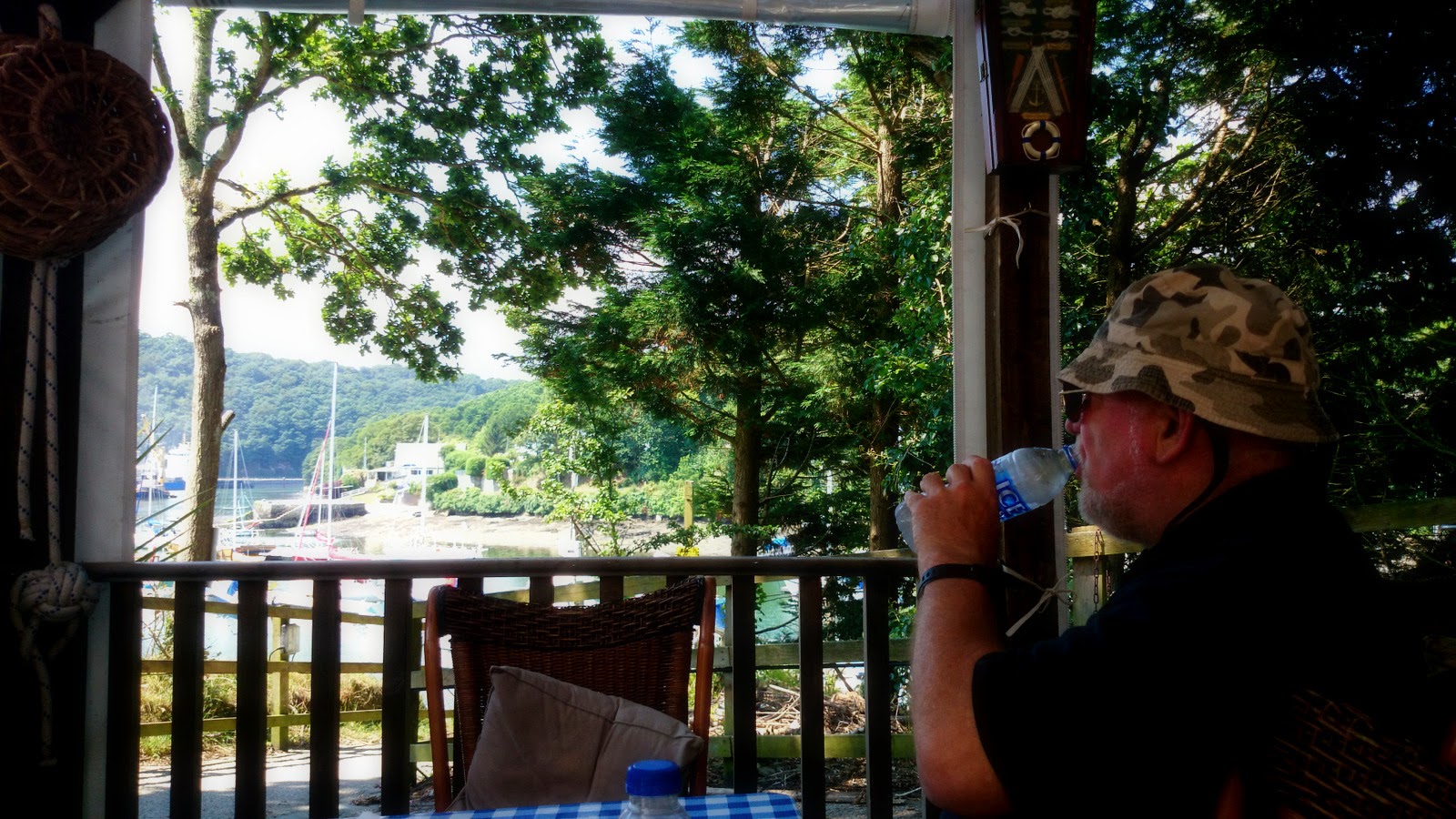 Afloat, we gently motored downriver towards the harbour mouth, stopping briefly on the visitors' pontoon at Fowey to buy some water. Duly provisioned, we continued towards the sea, a trip around Gribbin Head and a pint at the pub in Polkeris the humble ambition of our afternoon. On our last visit to Fowey a couple of years ago, Polkeris had made for a lovely day trip. It had been much earlier in the year, the weather just as pretty but much colder, and we'd arrived at the bottom of tide to find swathes of empty sand and a quiet, sunny terrace outside the pub where we could enjoy our beer as we watched Ondine bobbing gently at the water's edge. 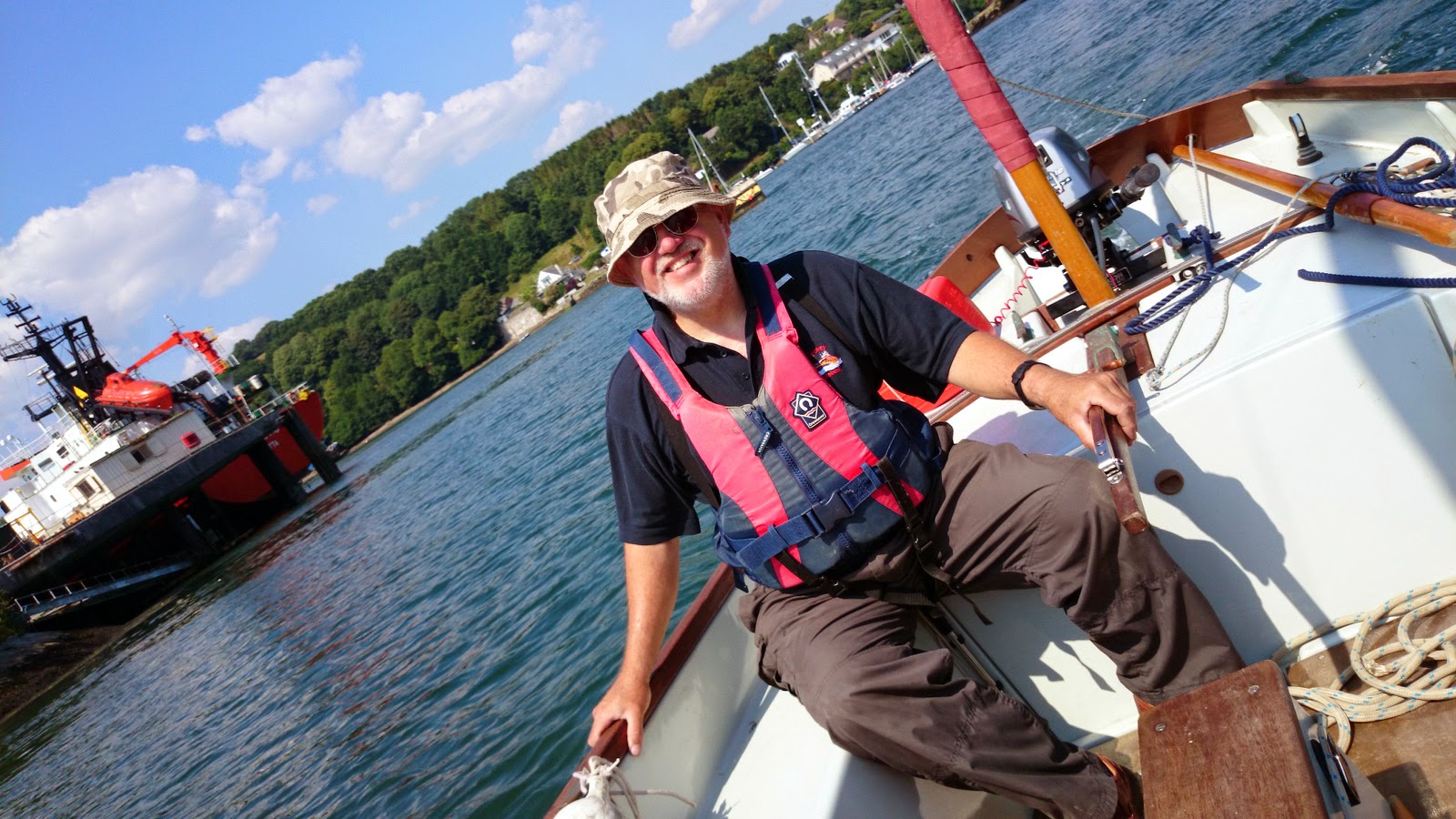 As we were leaving the harbour, I spotted a large, translucent shape ghosting through the emerald waters, about a half dozen foot down. A huge barrel jellyfish. I'd read something on the BBC a week previous about these unusual creatures having been spotted in Cornwall this year. Delighted to have seen one myself, we'd left it behind before I'd had chance to point it out to Dad. 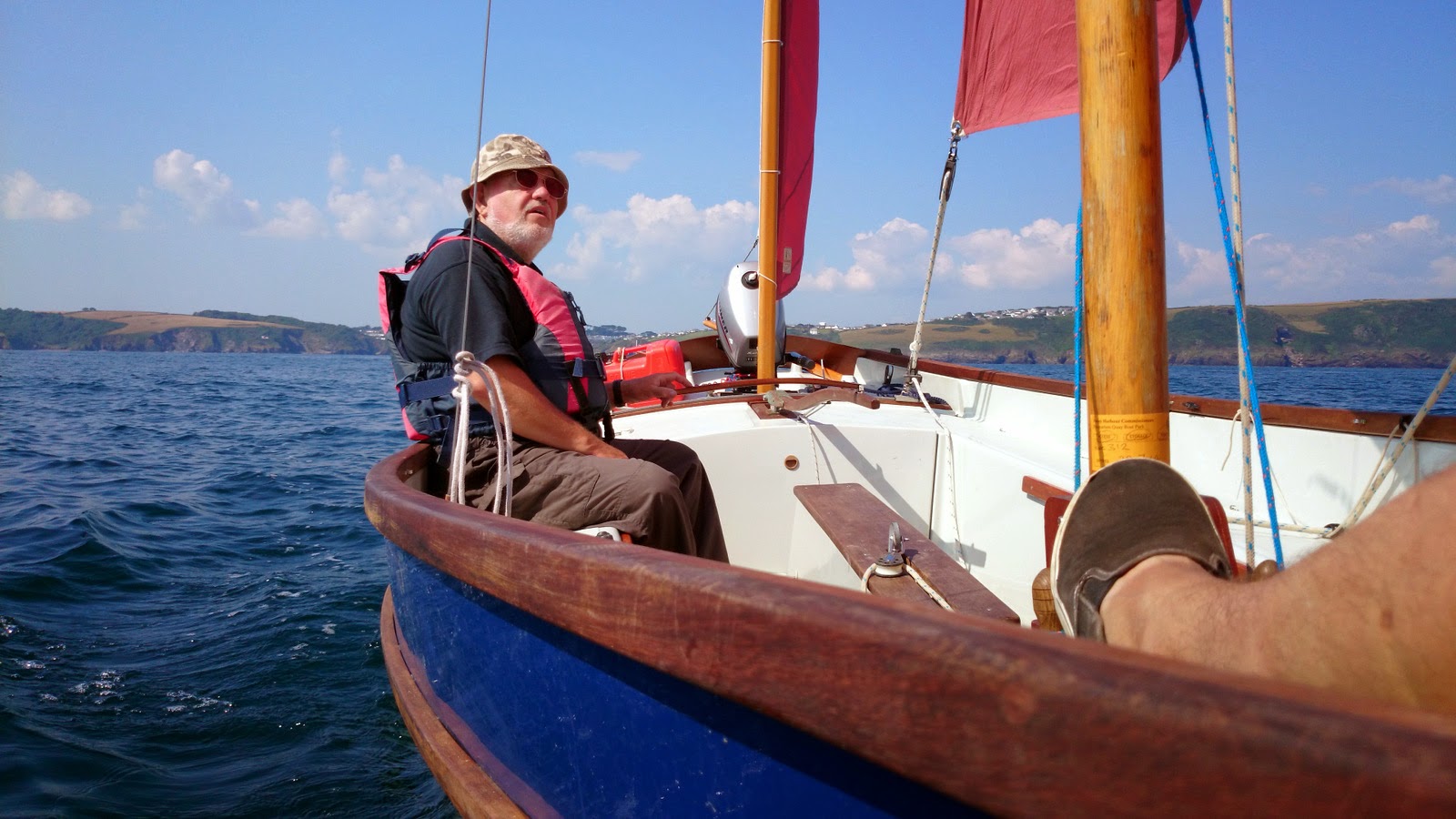 Out of the harbour mouth, we raised sail and killed the outboard. The tranquillity of the wide open sea was a delight. With the weather so light, Dad kept the helm and I trimmed the sails for a gentle beat out to sea. About an hour later we tacked, to lay the rounding of Gribbin Head. With so much water now in on the flooding spring tide, we decided we had plenty of depth to cut in between the cardinal and shore. With the sea so slight, I suspect Ondine would have just bounced off Cannis Rock anyway if we'd called it wrong. 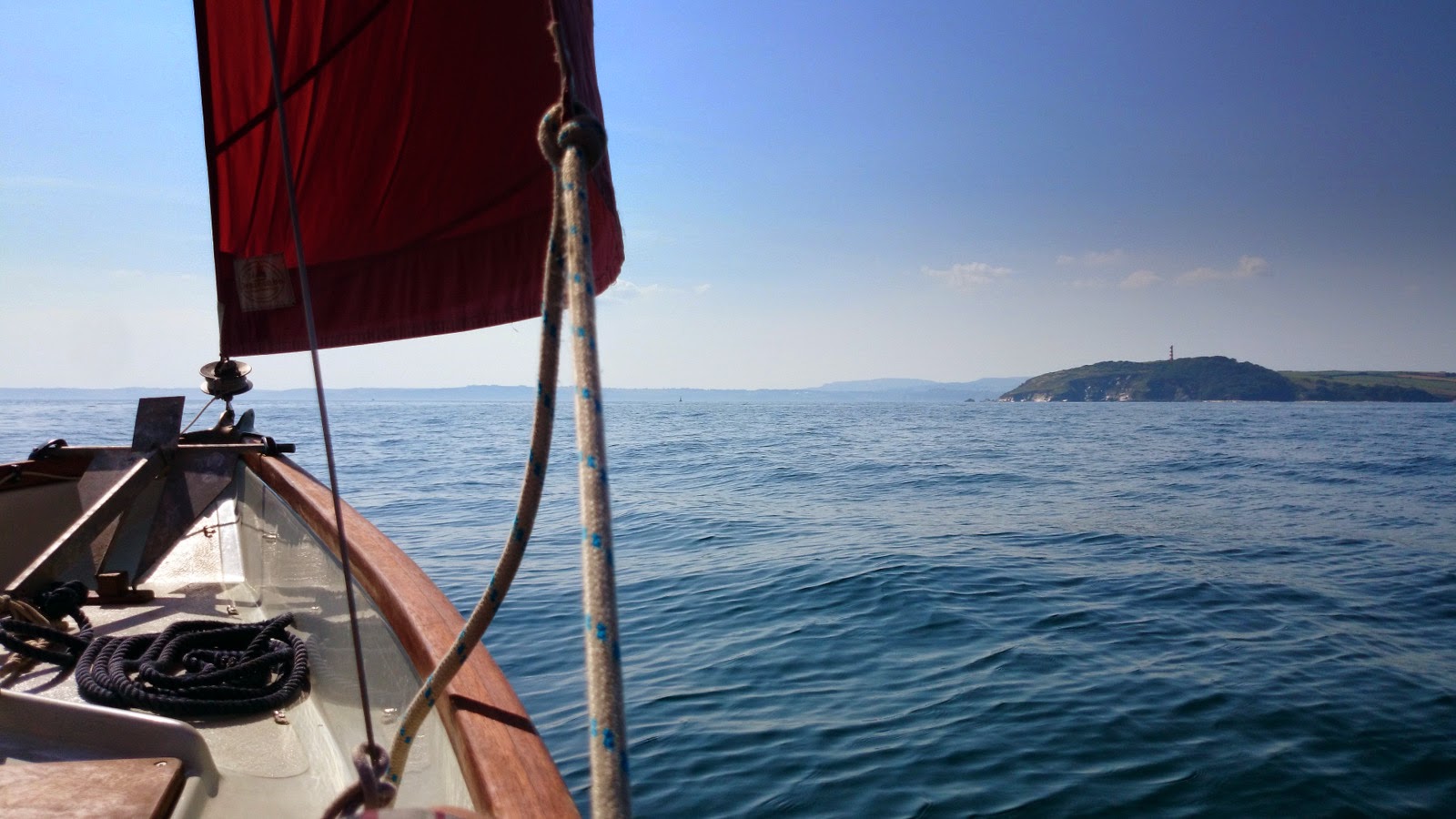 Past the headland, the afternoon wearing on, the now fading wind headed us badly as it curved to meet the lee shore, so we started the outboard, dropped sail and pottered on to our destination.

No longer watching the trim of the sails, I idled, slouched on the foredeck, watching the waters slip past, and realised we were almost surrounded by more of those barrel jellyfish. Up to a half dozen in view at any one time, improbably huge, majestic and alien, ghosting silently through the blue, presumably feasting on the plankton blown into the lee shore of the headland. 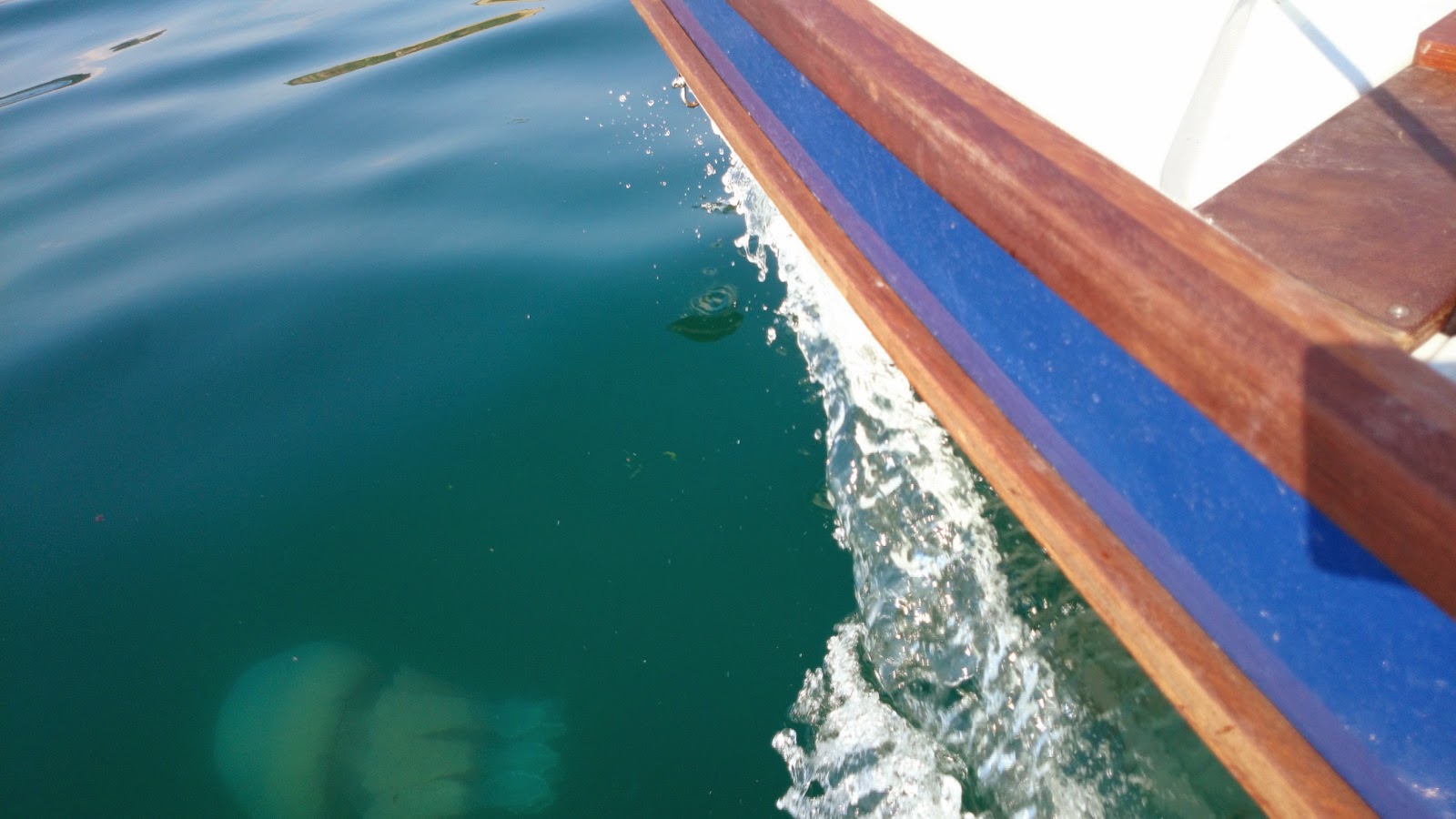 We arrived at Polkerris at top of tide. Still picturesque, but an entirely different picture to our last visit. The quay was swarming with tourists flinging themselves off into the water with whoops of delight, and the beach was crowded with folks basking in the Cornish sun. Determined to complete our objective, we cut the engine and paddled in amongst the shoals of bathers towards the shore, attracting any number of appreciative smiles for pretty Ondine, and good natured comments about the odd wisdom of trying to sail on a day with absolutely no wind. 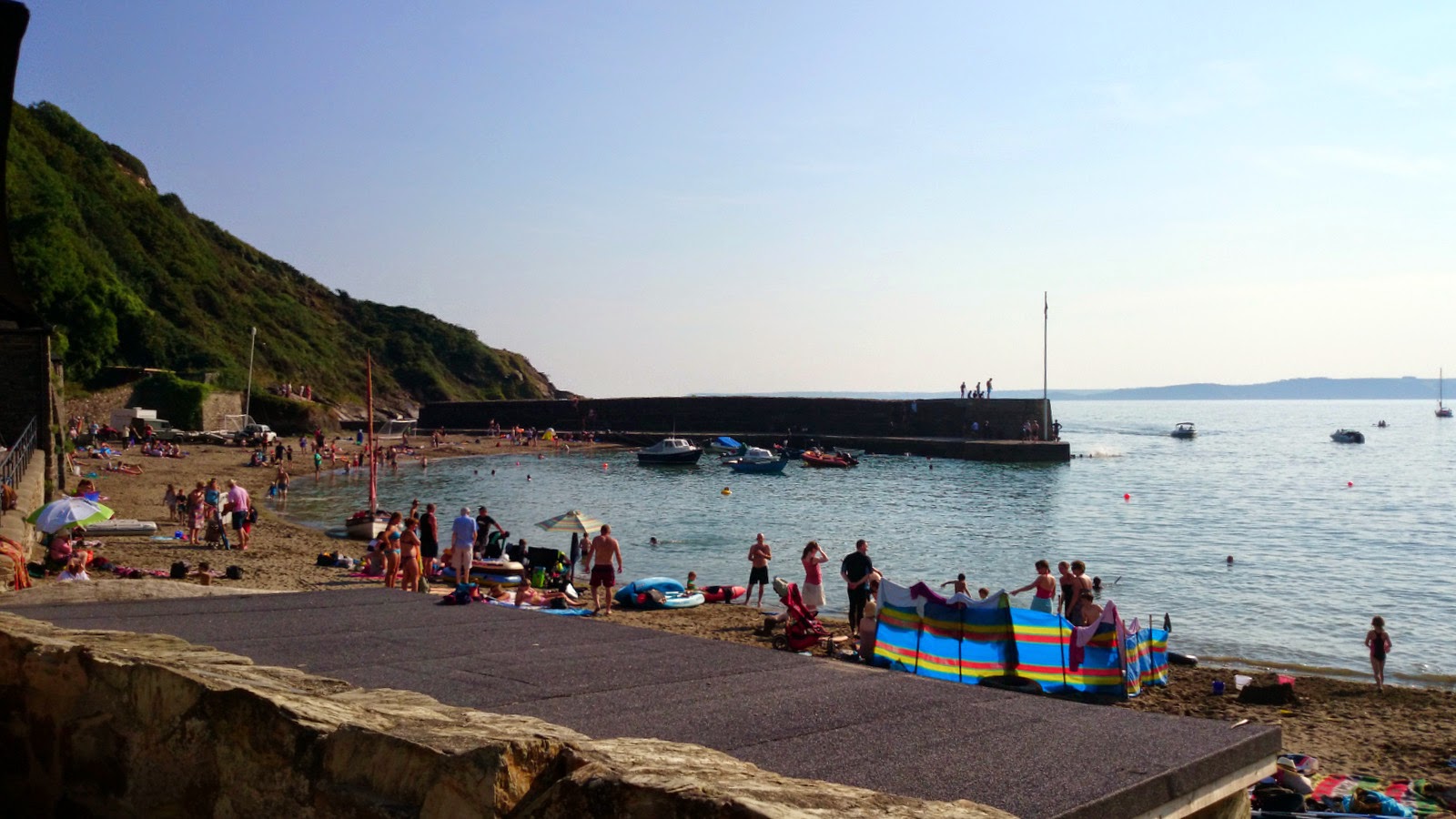 It was a good pint on the terrace, watching Ondine rest against the shore amongst the tourists. She seemed to have a special fascination for the few toddlers on the beach, more than one wandered over entranced, to be picked up and fetched back to their sand-castles by a herding parent. We didn't stay long however; no matter how friendly the crowds, I find being amongst too many people in one place always becomes claustrophobic unless you're looking out at them from upon a stage. Then they become an intoxicant. 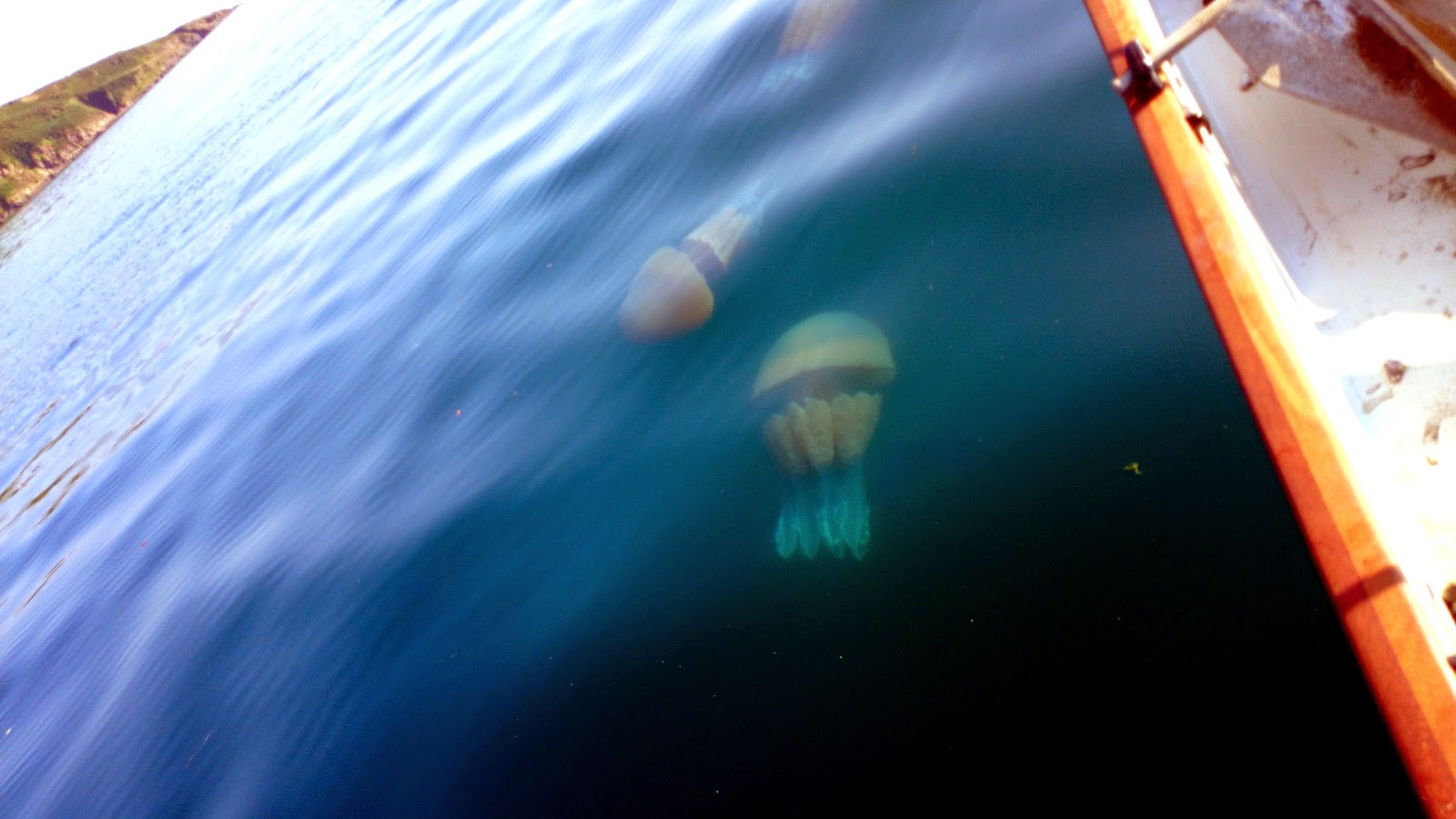 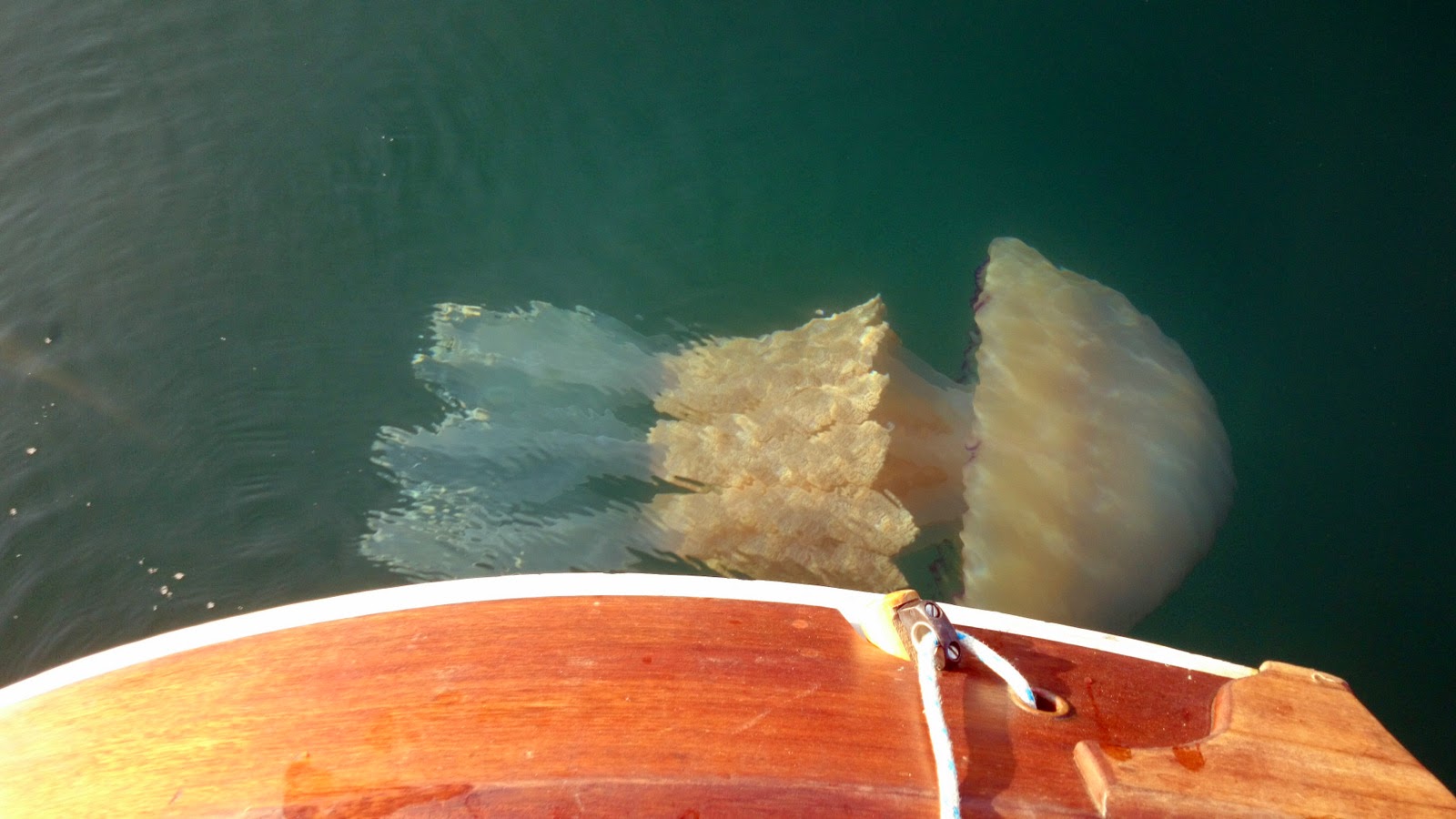 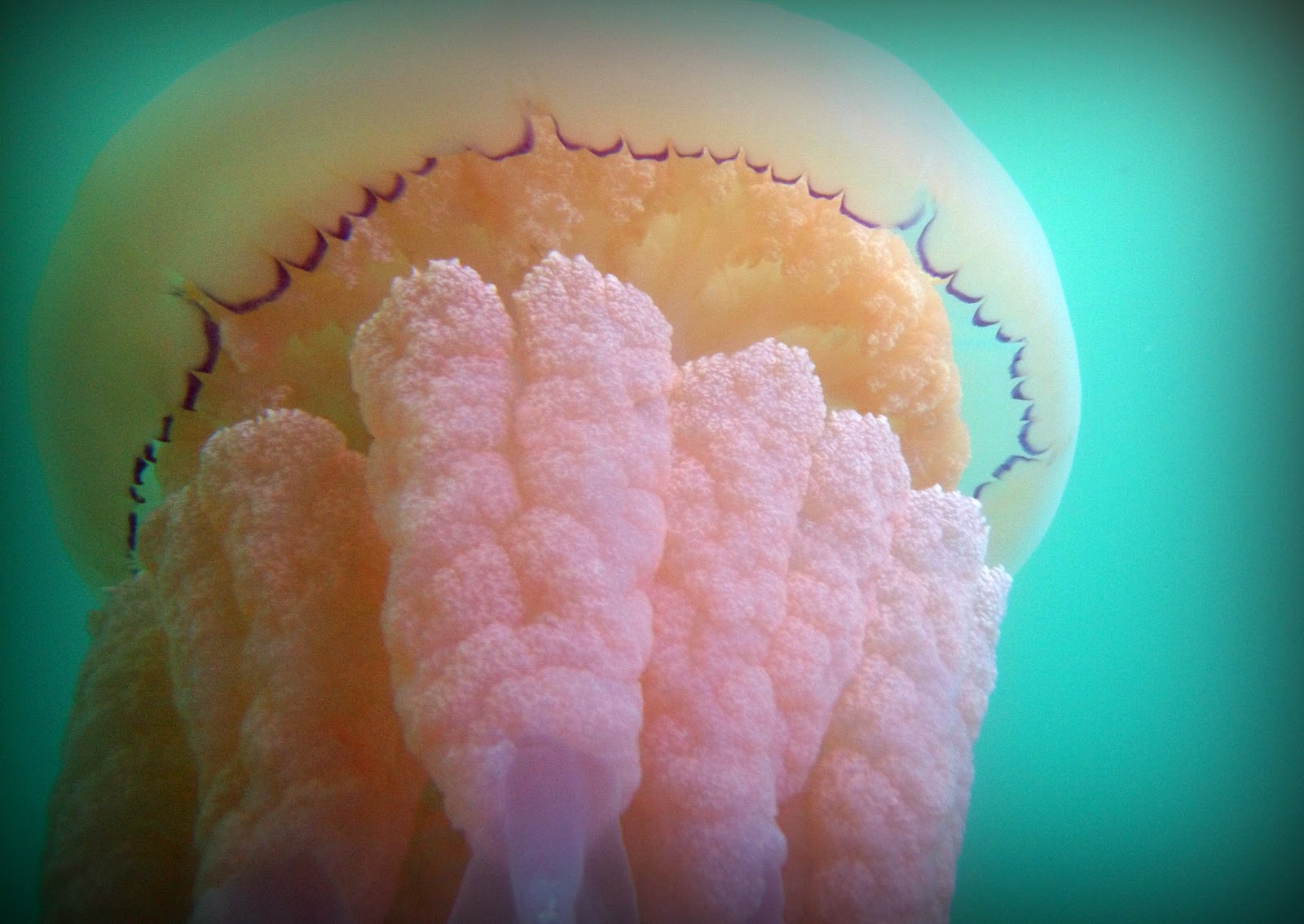 Returned to Penmarlam, weaving our way between yet more plankton-feasting giant jellyfish, we made Ondine tidy on her mooring against the pontoon, and checked into the Old Ferry Inn a little way down the road. Supper was delicious, eaten in a balmy twilight on the veranda with a gorgeous view out over Fowey and the harbour down towards the mouth of the river. 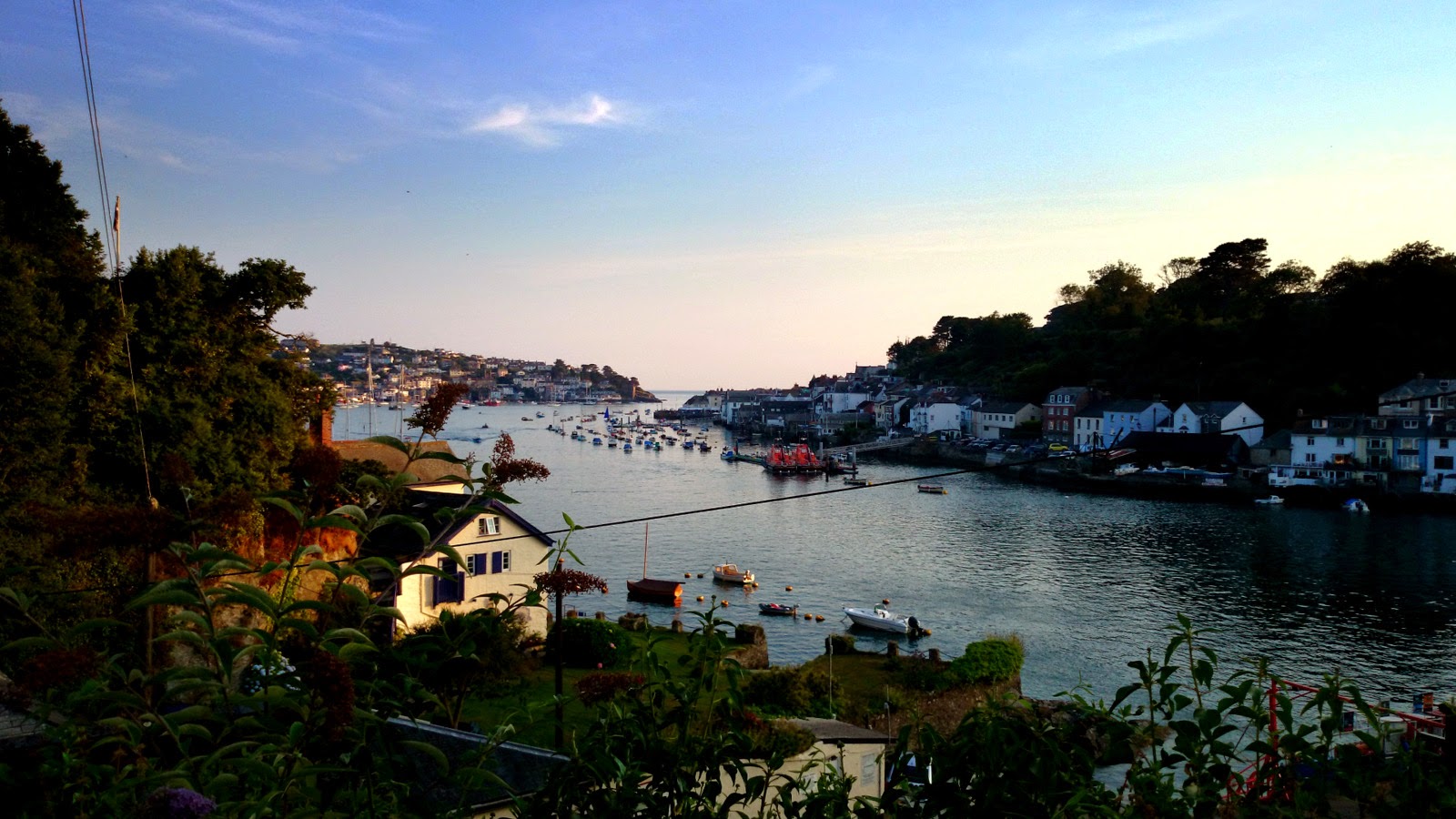 Great to read about the exploits of a fellow lugger owner. Many thanks. Steve Dye (Lugger "Phyllis", River Dart)