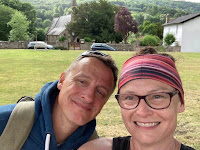 There was this chap called Offa who was king of Mercia from 757 AD through to his death on 29th July 796 AD. Which seems a very precise date, given that it was the middle of the dark ages, and will be exactly 1226 years ago tomorrow.

Given that it must've been a pre-requisite for royalty back then, it comes as no surprise to read that the guy was a bit of a bruiser. England wasn't yet a thing, but a collection of often warring Anglo-Saxon kingdoms. And, according to the wiki I'm reading right now, King Offa was generally considered to be one of the most powerful Anglo-Saxon kings to proceed Alfred the Great.

Whereas Alfred began what was to become the unification of the Anglo-Saxon kingdoms into England however, Offa was a different kind of character. Again, lifted directly from the wiki: in the words of historian Simon Keynes, "Offa was driven by a lust for power, not a vision of English unity; and what he left was a reputation, not a legacy." 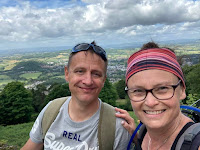 In any case, in a feat of engineering that must've been impressive for it's time, Offa built a ditch and rampart along the border facing into Wales, called Offa's Dyke. The monk Asser, again lifted shamelessly from the wiki, wrote that "a certain vigorous king called Offa . . . had a great dyke built between Wales and Mercia from sea to sea" although in actual fact it seems the structure ran from Llanfynydd in Wrexham, some five miles short of the north coast, to Rushock Hill near Kington, some fifty miles short of the Bristol Channel.

Still, that's a ditch and a wall some 64 miles in length, which is still a pretty impressive undertaking for its time and place.
The National Trails are a set of long distance walks in the UK. There are, apparently,15 designated trails and 5 coastal paths, and one of them is the Offa's Dyke Path, which covers the probable route of the medieval rampart. Whether the wall was ever completed, built all at once, stretched from sea to sea, or even built by Offa at all is apparently disputed, but this was the dark ages after all, so some licence needs to be allowed.

In any case, the designated National Trail for Offa's Dyke runs for 177 miles from Sedbury Cliffs near Chepstow, along the English Welsh border to the seaside town of Prestatyn on Wales' north coast. 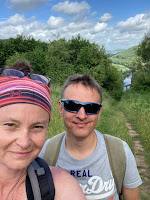 My friend Cathy has a thing for walking. Last year she attempted Offa's Dyke, but the heat of the summer beat her, and she had to abandon the section between Chepstow and Monmouth. Last weekend, she decided to return to finish it. 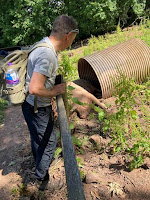 Cathy and I grew up together out in Kuwait. We keep in touch but rarely get to see each other these days, life and geography being what it is. However, Monmouth being all but next door to where I live, it seemed rude not to meet up to accompany her for at least some of the last stretch.

I had training Saturday morning followed by a gig Saturday night, so I couldn't join her for the first leg out of Chepstow on Saturday but, courtesy of a lift from Dad, I met up with her in the village of Llandogo at 0830 Sunday morning, somewhat bleary eyed but willing, and we walked the last 15km of the Offa's Dyke Path into Monmouth together. 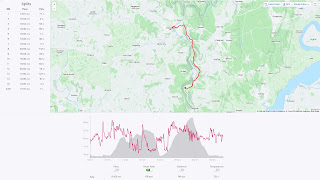 We were lucky with the weather, enjoying warm sun and a cooling breeze for the whole distance, and dodging the showers that had been forecast. Despite only having had about three hours sleep following the gig the night before, it was really lovely catching up with an old friend, and the walk was a reminder of what gorgeous countryside we have right on our doorstep.
Posted by tatali0n