a gig, a grading and a pub lunch

There was no time to go sailing this weekend, although I did spend Saturday night at the Club; they had an event running over the weekend and they'd booked my band for the evening's entertainment. It was a fun gig, a slightly smaller crowd than we're used to perhaps, but just as enthusiastic as any we've played for.

Because Bean, our usual drummer, was off enjoying Nibley Festival with his other band, we had a stand-in for the night. It's the first time we've played with Richie, though I've known him for a few years now as he owns the music shop where I buy my strings and the occasional guitar when my wife's not looking. It's always a bit nerve wracking when you have another musician join you for the first time.

It would, perhaps, be less so if we ever had time to rehearse, but that's not the way life works these days. I knew Richie would be okay, we've talked a lot over the years, I knew his background and experience and he'd seen videos of the set we were going to play. But even so . . .

Needless to say, he was fantastic. A superb drummer and, perhaps more to the point, a lovely guy to work with. We're playing with him again at the end of August, and I find I really can't wait. Saturday was a great night.

On Sunday morning I had a grading for my 2nd dan. With only two other black belts grading with me, we were actually out numbered by the panel of four examiners, which I found quietly amusing, although I kept that to myself.

It's been six years since my last grading. We'd actually hoped to grade back in 2020 but, well, we all know how that went. So once we all got our liberty back and were able to start training again, everything was fixated on getting back to a point where we were ready for yesterday. The last six months in particular have felt pretty intense. 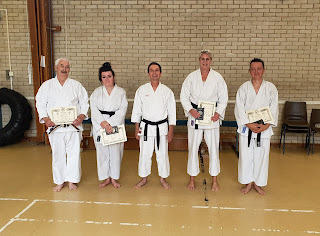 I have to admit, I actually really enjoyed it, to the point that I was almost disappointed once it was all over. The exam itself went well, one or two minor mistakes, but I felt at the time I'd got away with them. And despite getting knocked onto my backside during the kumite (free sparing) that concluded the exam, which, I should add, almost never happens, I still passed. As did my friends who were grading alongside me, Kathy gaining her 3rd dan and Lisa, like me, her 2nd.

In addition to the three of us, one of the panel members, Gene, was asked to join us in line and presented his 4th dan. In our style of karate, only the first three dan are graded by examination, any grades beyond 3rd dan are only presented on merit, in recognition of achievement, dedication and service to the art. Gene, who is also an occasional sailor, has been training since the mid 80's and teaching at his own club over in Lydney for, I suspect, as long as I've been training myself. It was very well deserved. 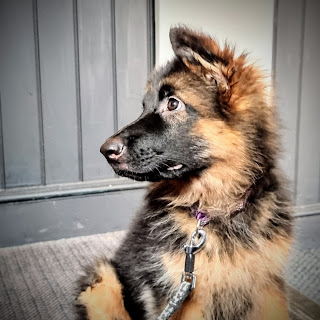 With all the work of the weekend done, on Sunday afternoon took Lottie and Nik out to The Old Restoration for a late lunch. It was Lottie's first trip to the pub and I think we can safely say she enjoyed it. She met some new people, and another puppy, a little bit older but, of course, much smaller, that she had a mad five minutes playing with just before we left.

In other news, the repairs to the Albacore should be finished and the boat delivered back to the club this week. With luck, Amanda and I will race her again on Sunday. It feels like it's been an absolute age. Meanwhile, however, I'm planning to race the Laser Wednesday evening, as usual.

At some point, Dad and I really need to get back out with Calstar. I feel like we've been neglecting her of late. There is a weekend free of gigs in the middle of July that I have my eye on, if wife and weather permit. Fingers crossed for both.