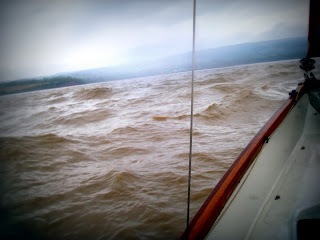 ....through the writings and posted pictures of friends and acquaintances and old photographs of my own. It's the next best thing to actually being able to sail myself. The photo above was taken aboard Ondine in one of my favourite wild stretches of water, The Noose, just off the village of Awre to port and Frampton-on-Severn to starboard, at the top of the Severn Estuary.

I might have posted this picture here before, I can't remember. If so, apologies for the duplication.

It's as high up the estuary as the Admiralty Chart goes, and is marked with the caveat "Changing Depths", the note "The channel in vicinity of The Noose and Frampton Sands is constantly changing" and the warning "There is practically no slack water".

The Noose is where the breadth of the estuary suddenly bottlenecks and twists sharply to port beneath Hock Cliff and the depth of the water reduces rapidly. On a good spring flood this gives birth to the often spectacular Severn Bore, albeit these days it's typically marred and muddied by the turbulence of dozens of surfers and their supporting RIBs; the only time there is ever any real traffic of any kind on this water other than us.

The tidal curve for this part of the river shows the tide rushes in very fast, but takes almost twice as long to ebb back out again. That's to our advantage when we explore upriver out of Lydney. Though we can't get
very much further than The Noose and still make it back on the same tide. Newnham on Severn, a couple of miles further up and into the neck of the river is about it.

A couple of years ago, we followed the Bore in Ondine, and in the company of a few other boats out of Lydney, eighteen miles up the River, crossed the weir at Gloucester at the top of the tide, entered Gloucester Docks and returned back down the Gloucester Sharpness Canal. At Sharpness, we waited on the next tide, locked out and crossed back over to Lydney in the dark. It was a fine adventure.

This year, I'd very much like to pick another such tide, and sail Ondine upriver with Dad to cross the weir again, only this time, instead of turning into the Docks and coming back, carry on up the river to Lower
Lode, just below Tewkesbury. It was one of Dad's favourite watering holes back when I was a kid, during those long summers when we lived on his river boat, and I know he'd like to make the trip again.
Posted by tatali0n