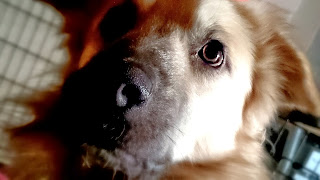 I sometimes also think he's also the cutest thing in my house. Next to
my wife, of course. Not that I'm comparing her in any way, shape or form
to a dog. Even a cute one, like Boo. And my daughter doesn't need to be
considered in the running, as she moved out a week ago so is no longer
officially of this household; a new job over in Oxford that includes
accomodation, all good stuff.

It does mean that in the last six months we've gone from a household of
three kids all competing for time, space, attention and food, to a
household of just one child plus dogs. Very strange, if I pause long
enough to consider it. A little less mess about the house, fewer mouths
to feed. Quieter evenings. Though approaching her mid-twenties, Tash was
spending little enough time around the house when I was about anyway,
that her now continual and planned absence hasn't been that marked a
difference.

Do still miss her a little though.

However, into the bargin, Sam (boy_v2) does seem to be enjoying his
newfound status as a virtual only child.
Posted by tatali0n