It's almost hypnotic. And as big a distraction as any I've yet found on the Internet.

Outside my window, the sky is blue and there's a gentle breeze. It's warm today. Summer is having a last bash at the UK and I'm glad of it and a little frustrated that I'm stuck indoors.

And the evenings have drawn in, so the Wednesday evening racing at South Cerney finished last week. I'm not sure what I'm going to do after work tonight. Cut the grass maybe.

But meanwhile, I know the tide has just turned to the ebb off Portishead. And savvy navvy tells me if we leave now, Calstar and I could be in Minehead in 6 hours and 26 minutes. In time to sit at anchor in the last of the sun and wait the tide before entering the harbour just before dark and taking the tender ashore to the pub. 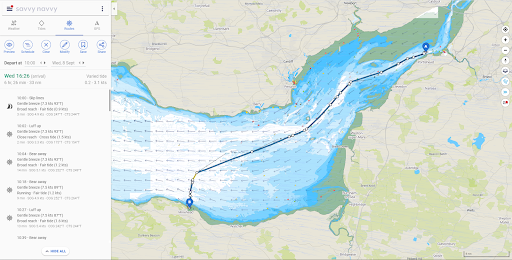 I've long wanted to visit Minehead by sea. I'm going there later this month. But by road, and staying at the Butlins Holiday Camp with my wife and a couple of our friends for a long "80's themed" weekend. Don't ask. It's payback for all the sailing she lets me do. I'll be fine. I shall be sociable and take every opportunity to anesthetise myself with alcohol.

And when I can, I'll sneak away to stare at the sea.

savvy navvy lets you overlay the wind and tide onto the chart. The hypnotic thing is that the wind lines are animated and drift across the chart to indicate direction and strength, similar to the way the World Wind Map visualises them. The latter is a site you should visit if you're not already familiar with it. 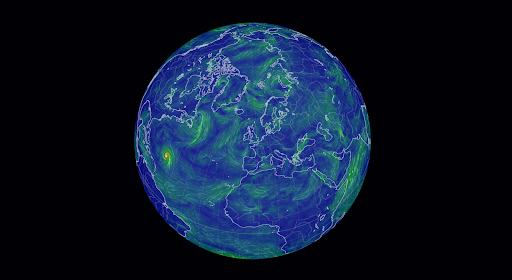 The distraction, of course, is that savvy navvy is telling me where I could be going if I wasn't sat here.

It has the occasional niggle. Especially given the tides we deal with here. If it can't plot the route then it pretty much just tells you it can't, and says it's a combination of wind or tide that makes the route impossible, or suggesting you move some of your waypoints out into more open water. It would be much more useful if it told you where the route failed, then you could plan around it.

For example, if I left in an hour and a half (and as the boat is only half an hour down the road these days, I could so do that!) then I could repeat the Holms Race course in 7 hours and 25 minutes today. 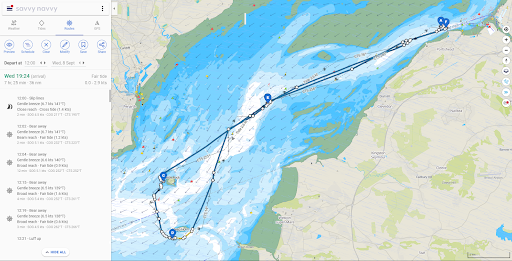 But it tells me I'd need to use the engine to round Steep Holm. To be fair, I would've loved to have had the option of using the engine when we hit the lee of the island last Saturday! However, if I switch off the engine option, rather than telling me that I can only get as far as Steep Holm without the engine, computer simply says no. 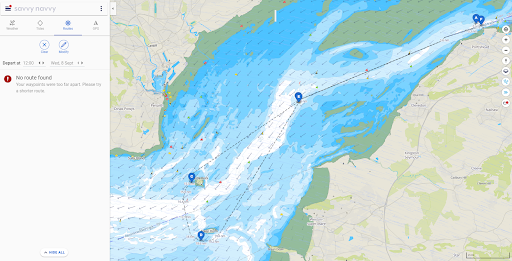 Or in this case that my waypoints are too far apart. But whilst that's the third variation of route failure message I've now seen, and so much better than the arbitrary soft crashes that were clearing down the route last week (and which I'm told the developers have now fixed and I've as yet been unable to prove otherwise - that's very impressive support, in my opinion) it's too general to be helpful.

But it's easily remedied by switching the option back on to use the engine, then you see straight away that savvy navvy is having the same problem in the lee of Steep Holm that we did . . .

Complete aside. I do love how it essentially gives you its workings down the left hand panel. Arguably, they're sailing instructions; luff up here, bear away there, close hauled here, broad reach there, etc. But they're actually way too fiddly to be of any practical value on the water. But it's really useful to see how savvy navvy is working out your course. And it makes it easy to tweak it to improve things. 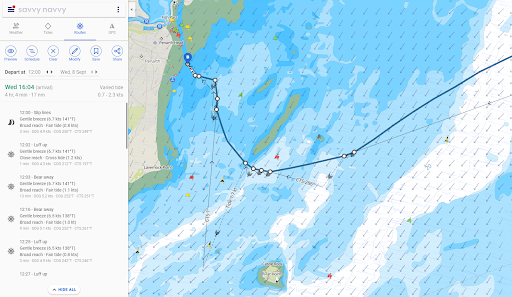 For example, if I ask it to plot a course from Portishead to Cardiff, which is a favourite of ours, on today's ebb it sends us around the outside of Cardiff Grounds and up the south entrance, suggesting it'll take 4 hours and 4 minutes if we leave at 1200. I'm so tempted.

However, we never use the south entrance when coming from the north, although I think if you read the cruising guides, that's the suggested route. But if you're careful with the tide and have the benefit of a shallow draft, the north entrance is quicker. And accordingly, if we add a waypoint in by the yellow utility buoy north of the Grounds, then it shaves half an hour off our time. 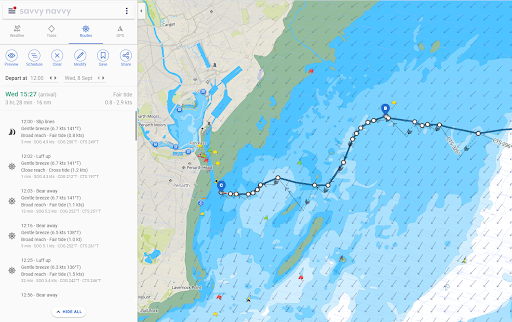 Which gives us a passage of 3 hours and 28 minutes. I'd have to check my logbook, but I think that would make it one of our fastest. However, it seems if we left at 1130 instead of 1200, then that would give us an estimated passage time of 3 hours and 18 minutes.

This isn't about racing, although it was obviously a big help for the Holms Race last weekend. The tides around here are significant, and the weather can, or in most cases, will change dramatically between one tide or another. If you want to go somewhere on the Bristol Channel, you should have a good idea of when you're going to get there so you know what the tide will be doing. It can often spare you a long wait at the other end for a lock to open or a harbour to float enough water to allow entry. And that, more than weather or available light, will usually inform when you need to leave.

Which makes this a really useful tool. Especially as it runs as a web app on my laptop and as an Android app on my phone, and my routes are synced between the two. I've still got 7 days to run on my trial. But I think I'm already sold.

Anyway, enough distraction. Coffee break is over. And actually, I return to my original point, it's hypnotic simply watching how the wind bends and curves around the Bristol Channel.