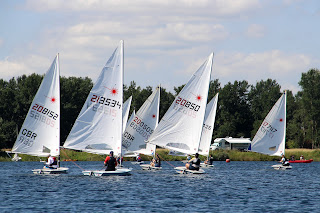 Credit for these photos go to Cotswold Sailing Club, who hosted a Laser Open that I attended back on 17th July. Which makes this a very late report.

I came back across the photos though as I was digging out the pictures to accompany the entry I've just (finally) posted for the Moth Nationals, and felt them too good not to share. And a race report written up just after the event by our club's Laser class captain brought it all back. I confess I've leaned very heavily on Kean's report to supplement my memory for the words that follow. 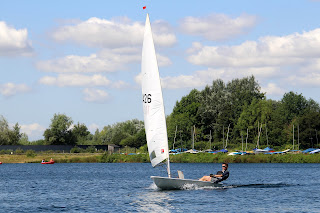 CSC is only five minutes down the road from my own club where I keep my Laser at South Cerney, so it took longer to strap the boat onto the trailer than it did to travel. 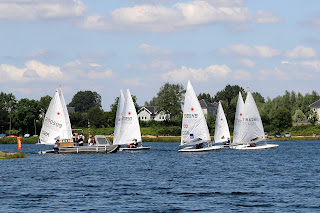 Two of us visited from South Cerney, myself and my friend and fellow Laser sailor Kean, along with three visitors from neighbouring Bowmoor, and one from further afield up at Barltey Sailing Club. We joined five home boats.

The first race seemed to use every mark on the course and seemed to overrun for about a couple of laps. A local sailor won it by a long margin, whereas I managed a comfortable 4th. The race committee self corrected for the second race, reducing the number of marks and the length. The visitor from Bartley took 1st this time. Uncharacteristically  consistent, I took 4th again. 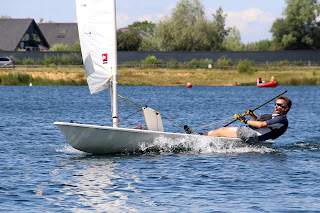 The Covid restrictions still in place at the time meant that lunch was a bring your own job, but CSC kindly provided some ice creams, very welcome in the weather for those of us that don't have a lactose intolerance! 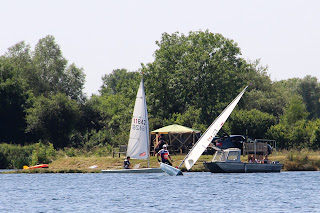 Race 3 followed the same course as the race before, and saw my club mate Kean pull off a superb port flyer at the start giving him a good head start over the rest of us which he maintained for a couple of laps, but eventually fell back. Again, showing uncommon constancy, I took a 4th. 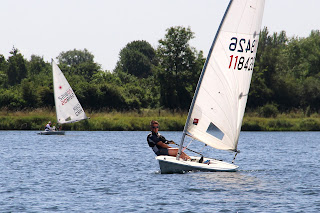 After the race, as we waited on the water for the next one to begin, the safety boat moved between us, handing out bottles of chilled water. A very nice touch on the part of our hosts.

Race 4 saw most of the fleet try to emulate Kean's earlier port end start, but they were caught our by their numbers and a late shift in the wind that left the committee boat the favoured end. Avoiding the crowds, I got a great start and the following race was a battle with the visitor from Barltey that I eventually lost, but took by best result of the day with a 2nd place. 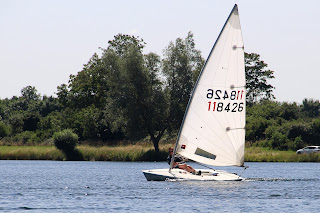 Back on shore, boats packed away, the results were announced over cake, chilled water and the left over ice creams. The visitor from Barley took 1st place with 3 wins, one of the Bowmoor sailors took 2nd, and a local sailor took 3rd.

Consistency being my personal theme of the day, I just missed a podium place, taking 4th overall.

It was a great day of close racing; we were well looked after by our hosts who set some very good courses to sail in what I think were very tricky conditions due to the wind direction.