On this day: Lupa 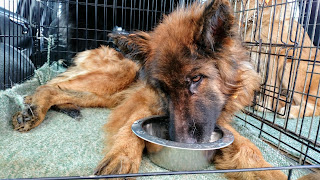 This day, five years ago, apparently. This is Lupa, one of three rescued dogs Nik and I picked up from one side of the country and transported to their foster homes on the other. I remember it as being a long day with a lot of driving.

She was in an utterly wretched state when the Rescue took her in. She was, over the long months that followed, meticulously nursed back to care by her foster home with the help and support of the Rescue and their supporters.

This photo, which I took of her in the back of my car moments after we'd picked her up, kicked off an absolute shit-storm. Please forgive the language, you know it isn't my normal fashion on these pages, but there really is no cleaner way to describe the cesspit of acrimonious politicking, backbiting and bitching that ensued over the months that followed.

I won't go into it further. Except to comment that the world of dog rescue is filled with generous, selfless individuals for whom the entire point and purpose of the thing about the care and welfare of these vulnerable, dependent, often damaged but incredibly resilient creatures. And is filled with a dismaying number of ego-manic individuals who are neither generous nor selfless but for whom the entire point would seem to be about them, and not the dogs they purport to care so much for.

Then again, perhaps that's just an analogy of life in general. 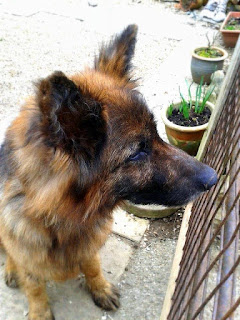 In any case, Lupa's story had a happy ending. The above photo was some months later that same year. It was a long road and convalescence, but she eventually made a recovery to full health, and ended up being adopted by her foster home and staying with them; the perfect place for her.

We lost contact with her and her foster family; the above mentioned politicking and backbiting somehow claimed that particular friendship amongst its victims before I eventually had the sense to bail out of the scene completely; to this day I've no real idea why or how, these things just go over my head, always have and always will.

I hope she and her family remain happy and well however. She was a lovely dog, and although Nik and I played but a very small role in her rescue and rehabilitation, no more than a bit part really, it was a pleasure to have been able to contribute even the little that we did.