February already. It seems I only blinked and that was both Christmas and January come and gone.

It's been a funny old start to the year; I haven't sailed yet, wind, frozen water and family commitments all taking it in turns to thwart the odd occasion when the opportunity might otherwise have arisen.

Dad and I did get down to Calstar for an evening in January. She still remains in "project mode" however, with the interior head-lining replaced, the bunk cushions replaced, the heads replaced and the cabin lights rewired and replaced with LED units. The work on all fronts is almost complete, but enough bits were still outstanding in January to keep us marina bound for our brief visit.

Christmas was good and bad. Good to have time off and family around. Good that I got to race at the lake Boxing Day and New Year's Day. Bad that my daughter Tasha came down with appendicitis the weekend before Christmas, and so spent the last couple of days leading up to the holiday in hospital having her appendix removed. Amazing that it was only a couple of days though, and how small the incisions were to effect the removal. Back in the 80's when they took my own appendix out, it hospitalised me for a week, left a six inch scar and took six weeks before the stitches were out and I was back on my feet at school.

That said, for such a small incision, they clearly still knock your insides about as much; she was some weeks recovering herself and it put quite a damper on her own Christmas. She's back on form now though, so all good.

January was devoid of gigs, with my brother (aka the band's bassist) away on holiday, but we've been back to normal the last couple of weeks, and will be busy as usual for the next couple of weekends to come. The new guitar is lovely, a real pleasure to play. She spent most of Christmas and January in her case though, as without gigs to distract me, I spent most of my time noodling about with the piano rather than guitar. For the first gig, weekend before last, it did feel very strange moving back to strings from a keyboard. 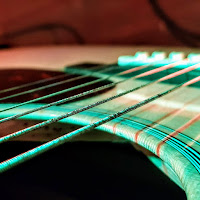 Finally, we had a bit of snow. Enough to stop play for a day, then it melted. When I say enough to stop play, I really mean but a few inches. Our friends over on the Continent (if we have any left) or across the Atlantic would no doubt laugh at us. Which is fine, as we're quite able to laugh at ourselves along with them. Well, some of us are.

It was good to take the dogs for a Friday morning run in the snow however, and then have it all melt off in the afternoon to clear the way for me to get down the motorway that same evening to my gig in Bristol. It wasn't so good the Sunday that followed to discover that on the first day in a while I had the time free to go play with the Laser, the lake was, unhelpfully, still quite frozen solid. 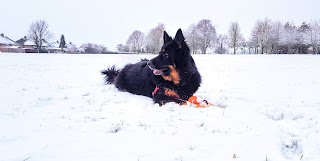 Never mind. It's thawed now. And I'm feeling optimistic for this coming Sunday. Likewise, if we get the next couple of weekends worth of gigs out of the way, I'm hoping Dad and I can get out with Calstar for the last weekend of February.
Posted by tatali0n