Wednesday evening, the wind had returned to its prevailing south-westerly direction, and was relatively blustery compared to how it's been of late. Forerunner of a bit of weather we have coming in across today.

I got off to a bad start just setting up. The top section of my mast has a collar that plugs neatly into the top of the lower section. It's held to the mast section with two rivets. One rivet had gone, and the other was sitting proud and distorted, preventing the mast sections from fitting together. I hammered some humility into the proud rivet, and with it now flush with the collar again, slotted the top section in, hoping the single remaining, failing rivet would hold out one final race.

The start was a bit of a hash. I set my watch wrong, so my countdown ran out thirty seconds too soon. I guessed my mistake from the behaviour of the other Lasers, and got to the line early, intending to drift down to the favoured pin end. Then Mark's Laser came up aggressively beneath me, and bearing away to defend my position and stop him luffing me up over the line, the whole thing turned into something of a mad charge down the length of it towards the pin.

The gun went just in time, and we hardened up and crossed. He tacked off to port quickly, ducking beneath me. I held on out to the left hand side. Pete's Laser had started conservatively, but made good speed up the centre of the course.

Approaching the windward mark now, I'm on starboard, Mark on port bears away slightly to duck me. As soon as he's past I tack close to stay on top of him. Lots of noise (nothing unusual from Mark's boat) complaining that I shouldn't have tacked, as he'd bore away to avoid me. Total bollocks. I didn't tack until I was past him, and whilst I'm obliged to not tack in his water, I'm otherwise free to sail my own course. That close to the mark, to protect your position you have to tack close enough to the opposing boat to make sure they don't have space to tack back onto you, otherwise you'll be on port and they'll be on starboard.

I don't mind people beating me in the cut and thrust of the action, but I'm not going to just give a place away for free. 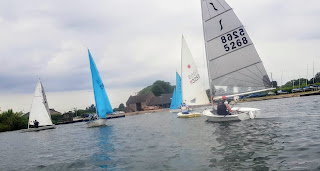 Then it all went wrong. Amidst the pressure of the rush and noise of the final approach to the mark rounding, I didn't ease my kicker off. As I tried to bear away a gust hit, and my boat heeled hard and rounded up into the wind uncontrollably, boom trapped against the water. I threw my weight out over the side to try and rescue it, could just feel it beginning to come back .....

Mark saw the gap between my boat and the mark and went for it. And the same gust that had just hit me caught up with him. |His mainsheet tangled with his tiller extension, and he thumped hard into my port quarter.

Profuse apologies, promises to do penalty turns, he's off again, but it took me a good minute to check for no obvious damage and to then untangle the boat from where she was now parked on the windward mark and get her back under control again.

So it wasn't my best race.

A short while later, I then went on to miss the toe-straps whilst roll-tacking too aggressively in another gust, fell backwards out of the boat and had to swim twenty meters after her before righting her from where she'd settled into a subsequent capsize. The pressure of successive mistakes accumulated, so I didn't sail well at all, everything too hard and too adrenaline fuelled, my head in the boat and not out of it looking at where I needed to be. 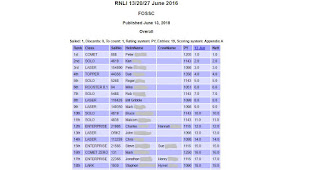 Not that I didn't still enjoy it, and not that I didn't still catch back up with Mark and beat him again. Pete showed us how it's supposed to be done and left us both for dust though, first Laser on the water, and taking a well deserved third place overall against the pursuit fleet, Mark and I taking eighth and ninth place respectively.
Posted by tatali0n