Calstar: a night at anchor

The weather is currently divine; 33C+ and I can see the treetops moving in the breeze. I'm planning to race at the lake this evening. It's been warming up since the weekend, albeit the wind has been a bit fickle until now.

This last weekend was too promise-bound for me to get to Plymouth; Friday evening I'd promised to take some friends' kids out sailing on the lake at Frampton, which was fortunate (and intentional) timing as I'd already committed to instructing at the lake all day Saturday, had a gig Saturday night and another gig Sunday evening, so Plymouth was always going to be out of reach. 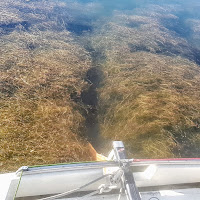 I very nearly didn't race at Frampton Sunday afternoon, conscious that I needed to be in Bristol in time for the evening's performance. Plus the weather was horrifically calm, and the lake is getting choked with some rather over enthusiastic weed, so at times it's more like hacking your way through a jungle than sailing.

But I couldn't help myself, sun was shining, and there was the faintest whisper of wind, so I rocked up at the lake lunchtime Sunday anyway, rigged the Laser and took her out for a race. Just the one, I said. And then sailed the other one because I was already there.

I'm glad I did. More than made up for the foolery of my previous races. Didn't hit anyone or anything. Even won the second race. Would've won the first as well, except I missed the last mark off when I originally noted the course down, so had to sail an extra half a lap on top of everybody else to re-trace my track and correct my mistake before I could carry on.

Only lost three places, deserved to lose more. So sorry, what was I saying about foolery?

Anyway, still got to the gig on time. And Sunday's gig, like Saturday's gig the night before, was one of the good ones. Possibly helped by the fact that England won.


Calstar hasn't been left entirely bereft however. Although I also had a gig the Sunday before, I booked the Friday off work, and Dad and I sloped off down to the boat on the Thursday evening after work.

Friday morning, with a lively southwesterly air and and a pretty, enthusiastically bouncy sea, we beat out of the Eastern Entrance and reached across the Breakwater to the Mewstones to take a look into Wembury Bay and contemplate a visit to the Yealm.

Didn't like the look of the bay however, with the southwesterly breeze pushing the sea hard into the lee shore, and fancied the idea of coming back out again against the forecast of the following morning even less. So we turned tail and set course on a close fetch back across the outside of the Breakwater and into the shelter of Cawsand Bay.

We dropped anchor under the lee of the land, amongst the company of a few other yachts, inflated the tender and went ashore to find a pint and supper.

We spent the night at anchor, which is a first for us and not something I previously thought I would've persuaded Dad to do. I'm glad we did, as having done so has opened up all sorts of options for further trips. And it passed peacefully enough, though he had me up the following morning at 0600. I think for no other reason than he was bored and, without the convenience of a handy pontoon, stuck on the boat.

The anchor came up without any trouble, the tripping line I'd secured to it proving an unnecessary precaution. The morning brought heavy winds and squally rain. We were still very well sheltered by the bay, but could see the angry waters out beyond the headland, at least when the rain cleared enough for the visibility to lift.

It was all downwind back to the marina on the other side of the Sound however, so under headsail alone it made for a very short, very comfortable ride back.

The anchorage in Cawsand Bay is a little more than three miles from our berth at Queen Anne's Battery, so as weekend cruises go, this was a little one; just shy of ten miles out, including the jaunt to Wembury Bay, and only three miles back.

It's good to have such treasures so local though, and was the perfect first anchorage as we had the option to bolt for home at any time. It was also great to have a bit of wind and sea to play with again on the Friday, and the chance to get the sails wet with a bit of spray over the bows.