Buffy: Released to the wilds 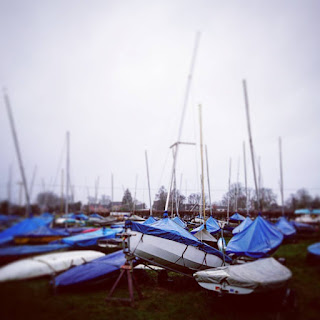 Buffy is, once more, returned safe and sound, released back to the wilds of the dinghy park where she's securely tied down against the weather, snug under her covers and waiting for the racing to start again.

Which will be this coming Sunday, as it happens.

The marina lock at Portishead is still in shutdown, so for once she has no competition for my affections. I just need to decide whether or not I search for a crew so I can helm myself  (Hels is sadly unavailable) or let Ben helm and crew for him.

Ordinarily, I'd jump at the chance to crew. But after the last six weeks of hard graft, I can't help but feel I want to take the helm for myself for the maiden race of her relaunch. And Ben's too big to sit in the front, so he might have to sit this one out. 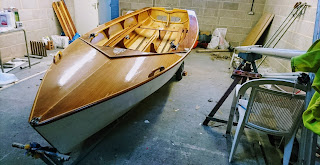 It's taken twice as long to sort her out as I'd optimistically estimated to begin with, back in the depths of January. There have been some missteps and setbacks along the way, but they do somewhat pale into insignificance against the wealth of advice and support we've had from friends, and particularly, my dad. 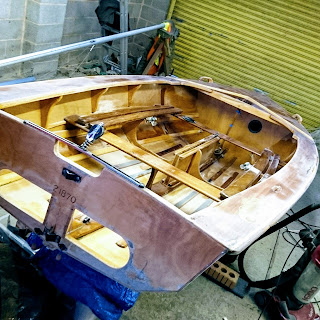 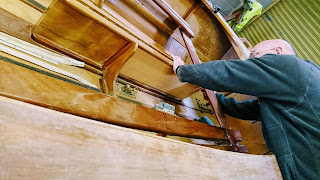 He's been with me every step of the way; I needed his practical skills to fix the centreboard case, and I think that's the bit of work he's most proud of in this whole episode, but even once that was done, he just kept turning up, even once an extra set of hands was a mere luxury rather than a necessity. 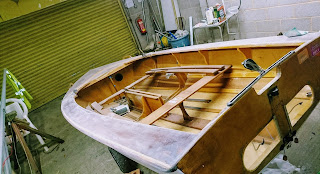 On which note, he's still at it, as although the work on the hull and decks are now done, he's finishing off my rudder and centreboard for me in his workshop. The plan is to refit them Friday evening. I have Saturday as a contingency, but he's rather hoping I can head down to Portishead with him then to do the necessary climbing around in cockpit lockers whilst he and my electrician cousin Vince do the clever stuff with installing Calstar's shore power. 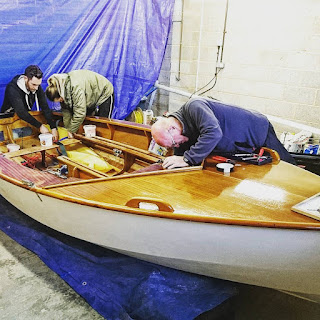 There are a few other odd bits to still screw in or rig up, a last replacement buoyancy bag to attach and a burgee to fit, but most of Buffy's refit was completed by late Sunday. Matt and Hels chipped in for a while, which was most appreciated, until the fresh varnish fumes overcame Matt and we sent him home with Hels to watch the rugby. 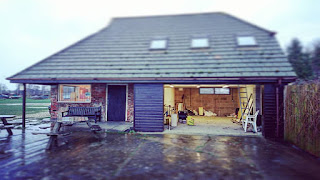 But Dad and I had her out of the boat-shed, back on her trolley and the mast back up by about 1730 that evening, just in time for the rain to really set in, of course.

But the water looked lovely pearling up on her shiny new decks. 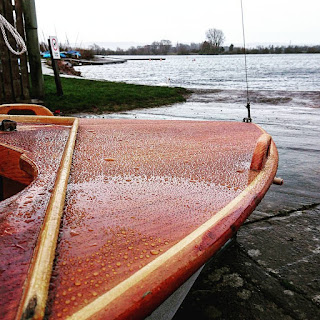 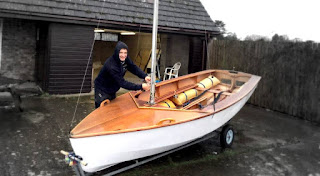 To remind myself of what she looks like under sail in all her glory, I've included an old photo below from late last season. I don't have a note of who took it, but it'll be one of a select few, and I'm sure none of them would begrudge me posting it here, despite the lack of credit. 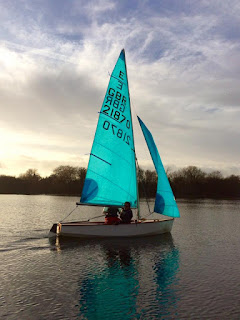 And perhaps, just for balance, I thought I ought to also conclude with a photo of Buffy in a different poise. Ben was at the helm for this second one, which I should add has nothing to do with any reluctance on my part towards the idea of surrendering it to him this coming Sunday.

I should also add that although it looks like the terminal stage of a capsizing broach to windward, we somehow recovered it despite the odds and raced on. Although, as I recall, there were plenty of other capsizes of a more complete nature on our part across the totality of that particular day's racing. 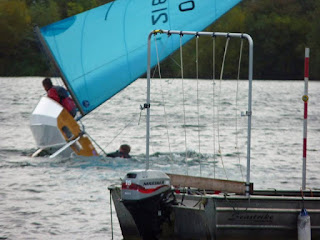