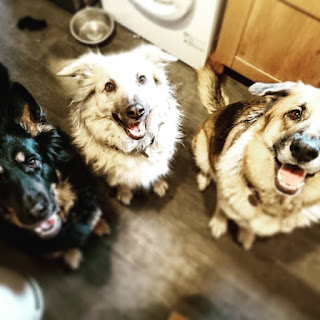 Saturday morning began with me getting cornered in the kitchen by these three muppets as I tried to make myself a cup of tea, and nagged for Friday night's pizza crusts, which they seemed to think would make a perfectly adequate breakfast.

Who was I to argue?

Pizza crusts duly delivered to their gaping, insatiable maws, Nik and I headed out early. Dad wanted some help locating and fitting a socket to Calstar for our planned shore power conversion, however, Nikki had the day off work and wanted to spend it with me, so a deal was struck whereby she'd accompany us both down to the boat in Portishead on the promise that I'd treat us all to lunch afterwards. 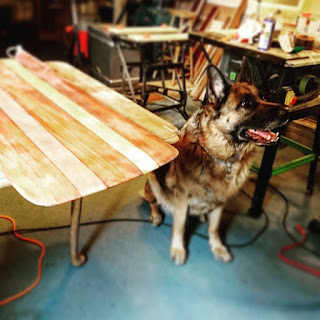 So off to Portishead we went, meeting up on way with Dad at his place, where of course I took the opportunity to let Bruno show off what a fine job Dad is doing with our centreboard rebuild, under his close and constant supervision of course. Contrary to the weight of dog hair from my own three pizza-crust scrounging scoundrels that's been inevitably added to the new varnish on Buffy's decks, I'm sure these particular dog-hairs won't slow us down too much in the coming season's racing. They do inevitably make up a good proportion of the filler that Dad added to the epoxy to bulk it out.

Racing at Frampton is due to begin again next Sunday.

Of course, next weekend I won't have to sweat over whether or not to race Buffy or sail Calstar, as long as we finish Buffy's repairs and have her race ready in time for Sunday. Calstar is still marina-bound, penned in by ongoing maintenance on the still shut-down and currently drained marina lock. 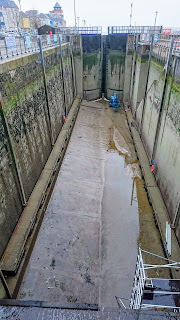 Interesting how the lock floor slopes so clearly and intentionally from left to right; before now, coming in on the first lock of a low spring tide, the lock master has directed us specifically over to the right hand pontoon, explaining it's the deeper side. This would be why. 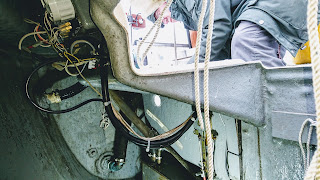 We've decided to put the socket for the shore power inlet astern of the throttle lever, reasonably high up the cockpit locker wall to minimise the risk of accidentally stepping on it. We looked at various options, but everything in a relatively small 26 footer is a compromise of one kind or another. This seemed to involve the least compromise.

The locker itself, once cleared of the spare gas bottle, spare tank of diesel, kedge anchor, buckets and numerous lines of all descriptions and uses, was surprisingly roomy. 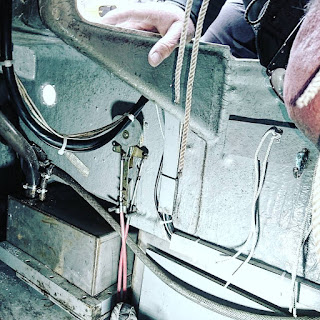 Nikki and Dad mocked me mercilessly about the variety and quantity of lines retrieved from the locker, Dad making "tidying" noises about how maybe we should go through them and throw the ones we don't want out now they're out all over the forward bunk. Thing is, I already did that back in the autumn. Although I admit I wound them up a little by grumbling and muttering things like "Can't have too many spare lines on a sailboat" and "That's not a rope, it's a warp" under my breath, truth is you can.

But we don't. All these lines still remaining both have a use and have found a use at least once in the last six months. You've got to watch Dad though. He's an incessant tidier and pathologically minimalist. If I'm not careful, he'll sneak down there without me and tidy my lines up, and it won't be until I'm trying to cling to the walls of Bristol City Docks Lock with my fingernails and wondering where my 15m dock lines have gone that I'll realise he's done it. 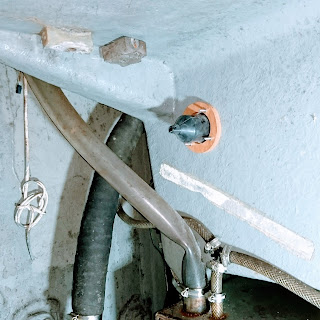 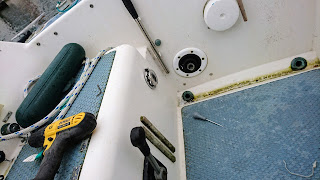 I'm perhaps being a little unfair. We do have a habit of collecting clutter, and it's surprising how quickly clutter overruns you in the confines of a small boat. As Dad points out, it's easy to lose track, and if you don't know it's there there's no point in having it.

Minimalist tenancies aside, he is a very dab hand with a drill and screwdriver. The shore power socket is suitably sited, ready for the wiring up, intended I think for this week, or perhaps next. In any case, a good morning's work done, we retired to H&W's for a very pleasant lunch at a table overlooking the marina. 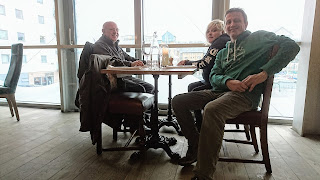