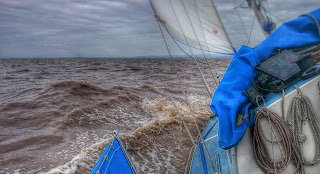 Had a very enjoyable couple of hours out with Dad and Calstar this morning. Overslept, which never happens but apparently did, so didn't get out as early as I'd wanted, which meant we didn't get as far up-channel as I'd planned to go.

However, we eventually managed to lock out at 0900hrs, just over an hour before high water, and got just under three hours of very fine sailing in an enthusiastic breeze, up to the Bridge and back, a total trip of 12.3 nautical miles.

Had some amusement on the way back in at around 1135hrs, after calling up the marina on the VHF and asking for a lock. The marina told us that the next lock would be 1145, but that they'd get it ready for us. As we entered The Hole a few moments later, I could see the lock was down, empty of traffic and the gates were open and waiting, but the three lights weren't green.

Solid red would have been normal, and would've meant do not enter despite the open invitation of the gate. But flashing red was unexpected. I was a bit stumped. After some hesitation due to an understandable reluctance to display my ignorance to everybody, I decided to call them back up:

Calstar: I'm sorry, I'm sure I should know this, but what do three red flashing lights mean? Over.

And then the lights turned green.
Posted by tatali0n