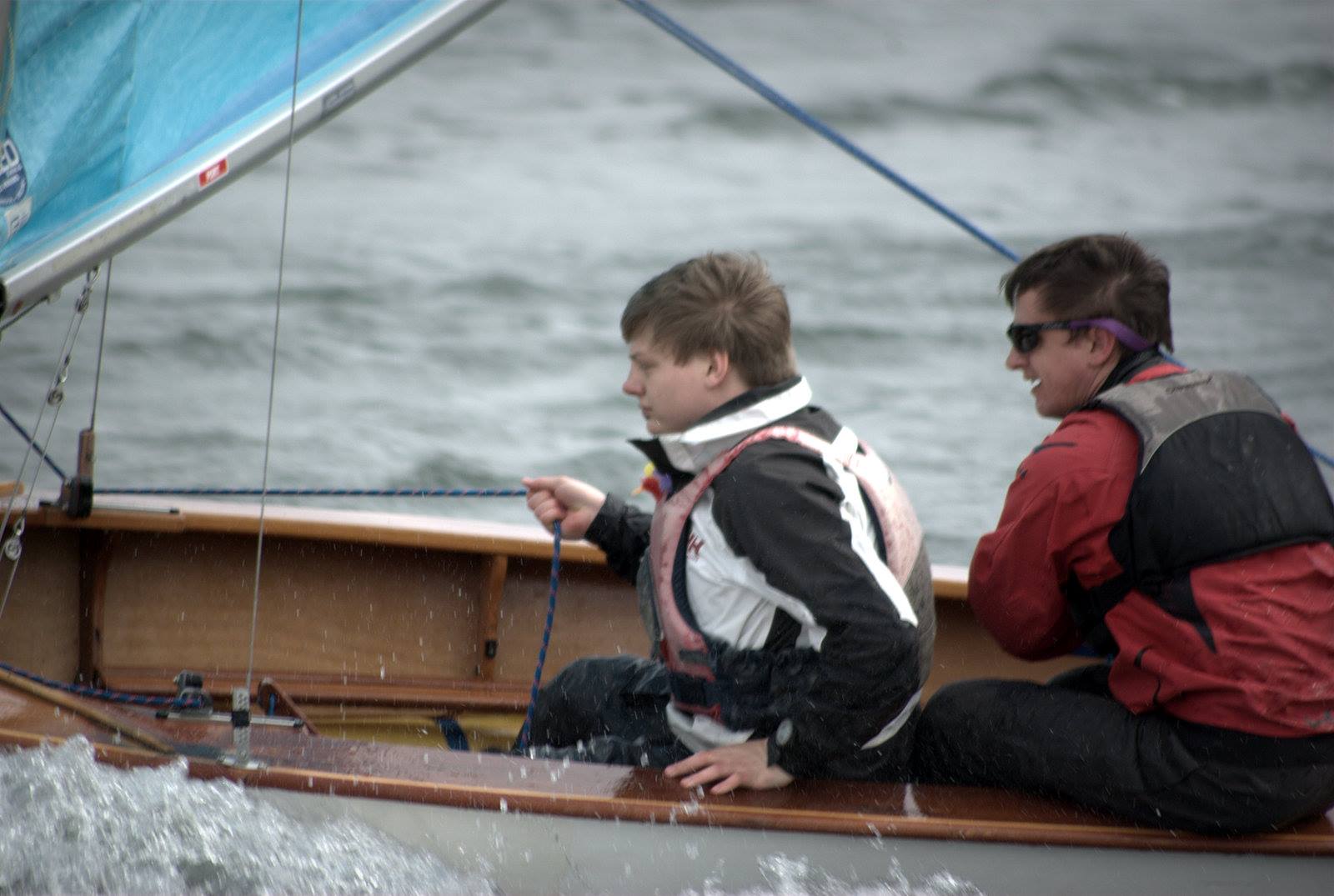 It was a blustery one. The winds came in as promised, bullish on the Saturday and then outright abusive on the Sunday. A westerly F7; the idea of racing Calstar was swiftly scratched the night before and instead Ben and I speculatively packed our waterproofs and wetsuits and headed down to the lake at Frampton.

It looked remarkably calm. The shore by the clubhouse was slightly windward so I knew it would be deceptive, but even so, the lake seemed reassuringly flat, although you could feel the promised violence in the wind.  We dinghy sailors are a bit like lemmings, collectively encouraging each other to take the jump. We could see a clutch of Lasers and a couple of Solos rigging, so pulled Buffy out of her berth and set about preparing her for the race. 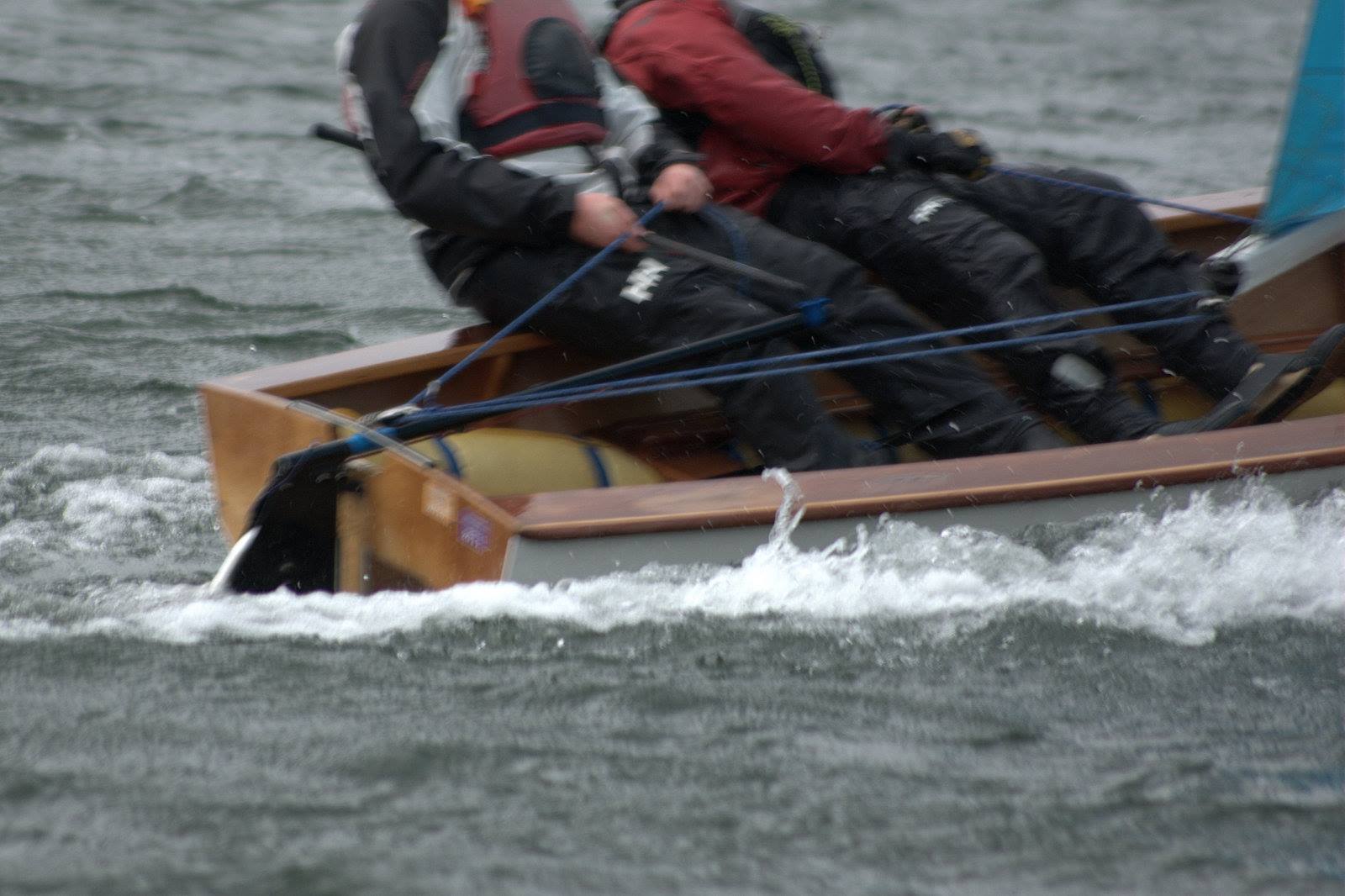 After some lengthy discussion and a lot of non-committal "I don't mind" and shoulder-shrugging from Ben (I think it's the final remnant of the teenager left in him) we finally agreed that this time around I'd take the helm and he could crew. I don't know how much he weighs these days, but I suspect it's a fair bit more than me. A part of the reckoning in the decision was that crewing, he could best use that weight to keep the boat flat and upright. 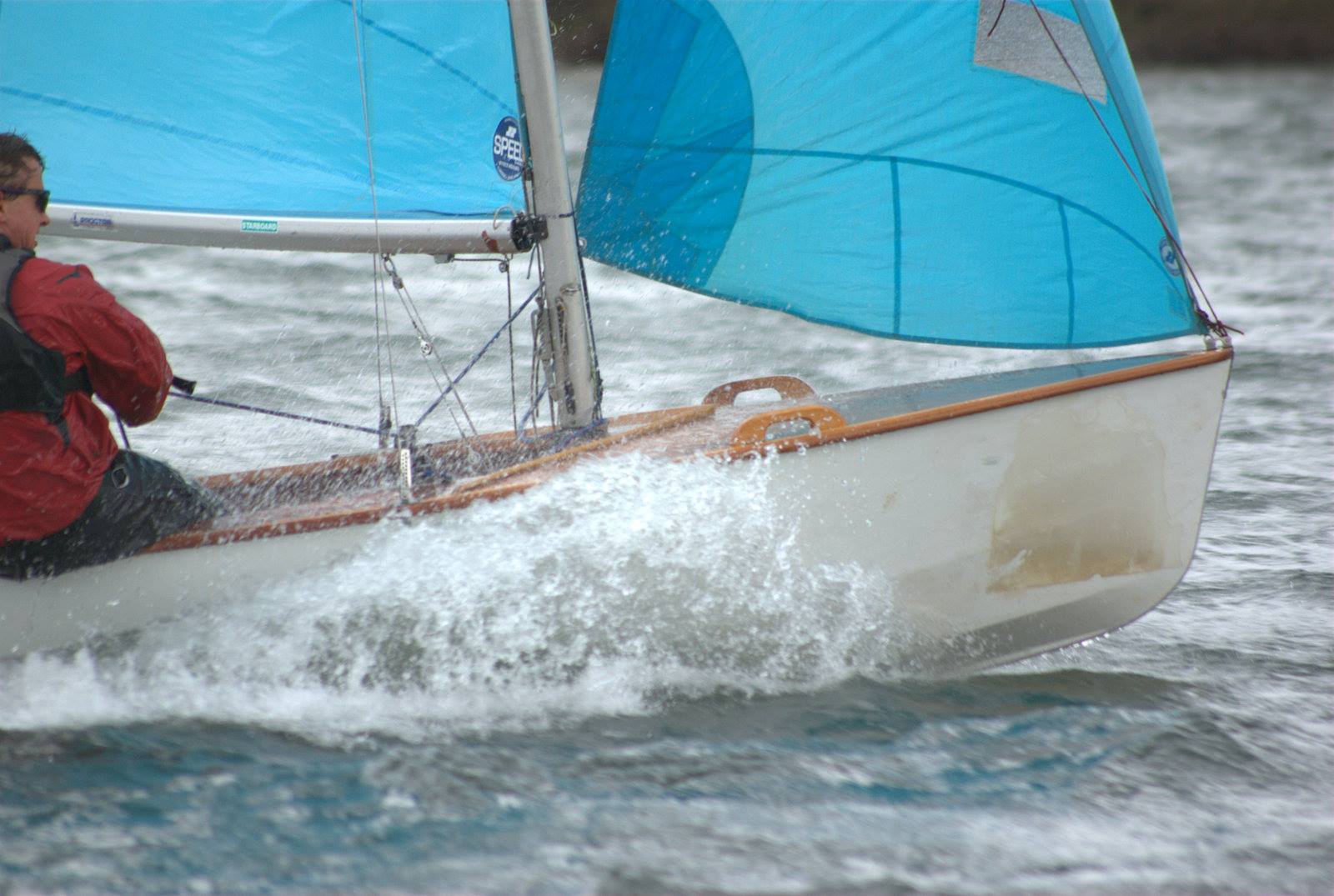 It's been an amount of time since he last crewed an Enterprise. In a blow, you need to be both quick and light on your feet. Staying pointy side up is not just about the balance of the boat, but critically, about trim. Anywhere off the wind, as the gusts hit you need to get the weight back fast and the bow up, else she digs her nose in and broaches uncontrollably. Our first capsize was just behind the line, a little under three minutes before our start. 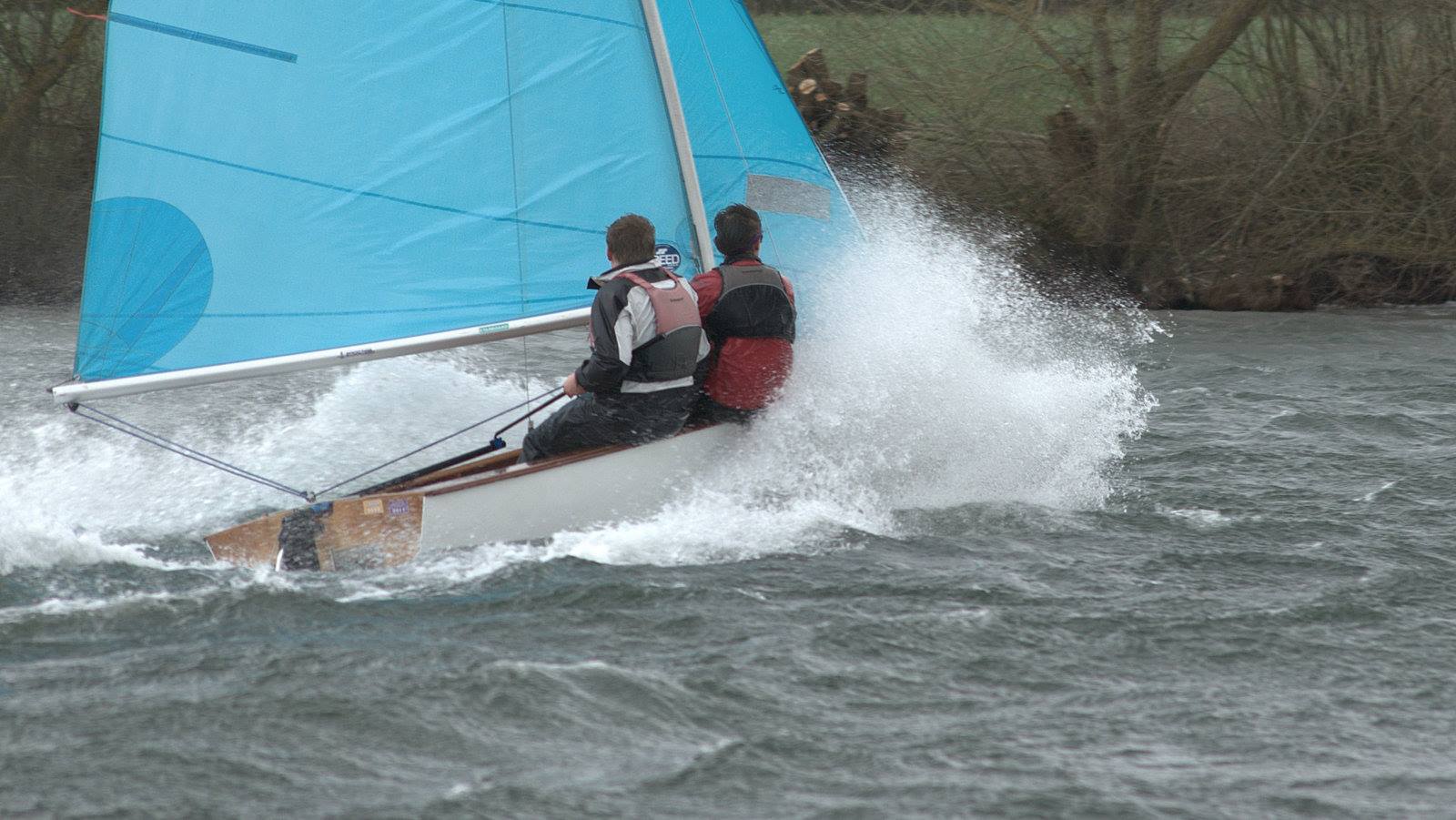 It was becoming clear our initial strategy was not playing to our respective strengths. Ben's a great helmsman, so once we got Buffy back up, we swapped seats. There was a brief question as to how we were going to get her upwind with all that water aboard, but the answer was to beat loose to the wind and just play it careful with the balance. We crossed the start-line unbecomingly waterlogged and five minutes late, but to a (possibly ironic) cheer from the race committee and a feeling of distinct accomplishment. 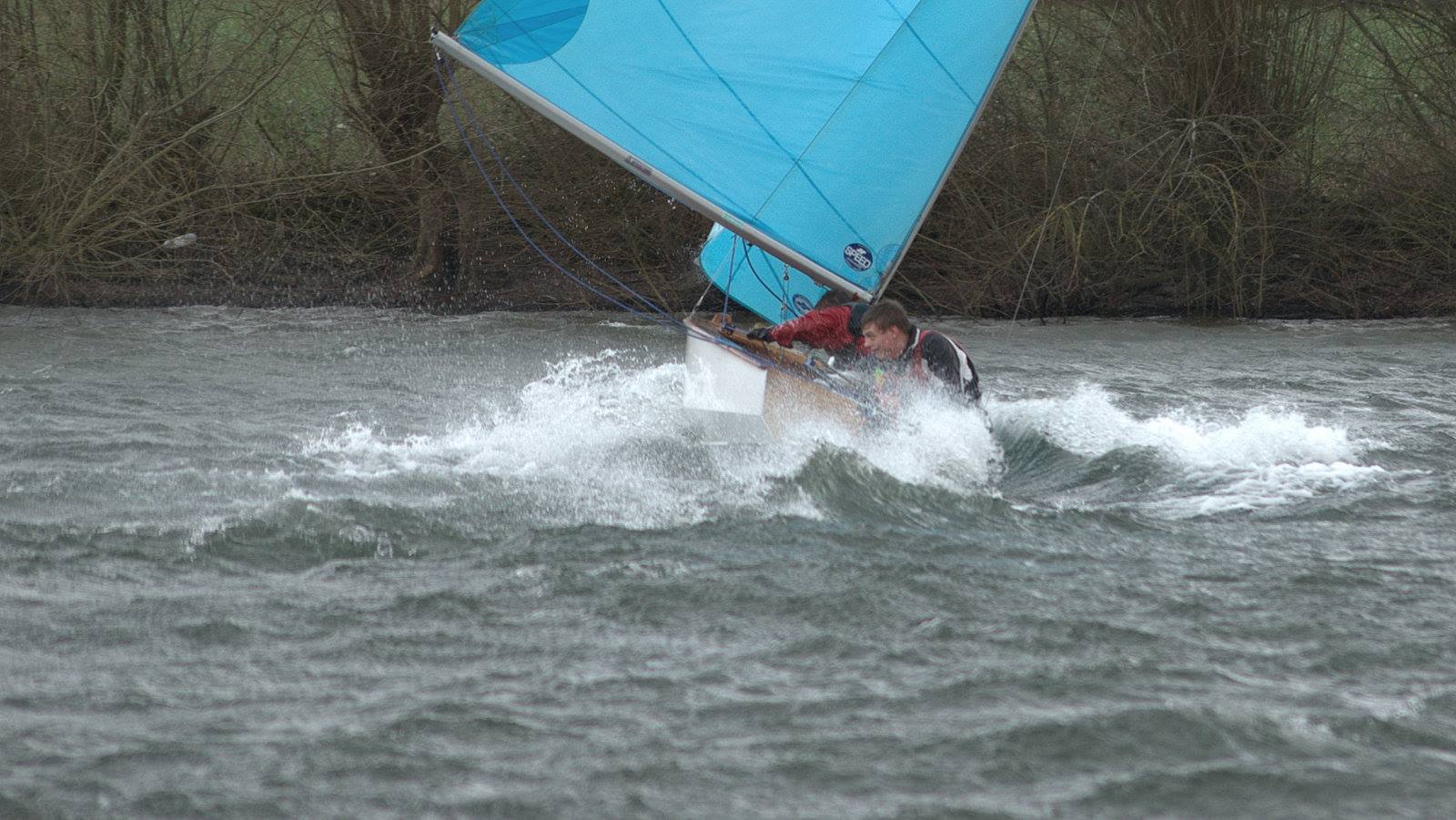 The water was out of the boat by the time we gained the windward mark. The next reach was close and uncomfortable.  The wind was far from constant in direction or speed, bouncing around the trees on the bank and hitting us in unpredictable but furious splotches. We toyed briefly with putting a tack in at the approaching gybe mark, but still moving fast on the back of a fading gust, we gybed anyway and got away with it. A broader, faster reach to the first leeward mark was followed by another beat back to windward, another reach and then a second gybe, again without undue event. 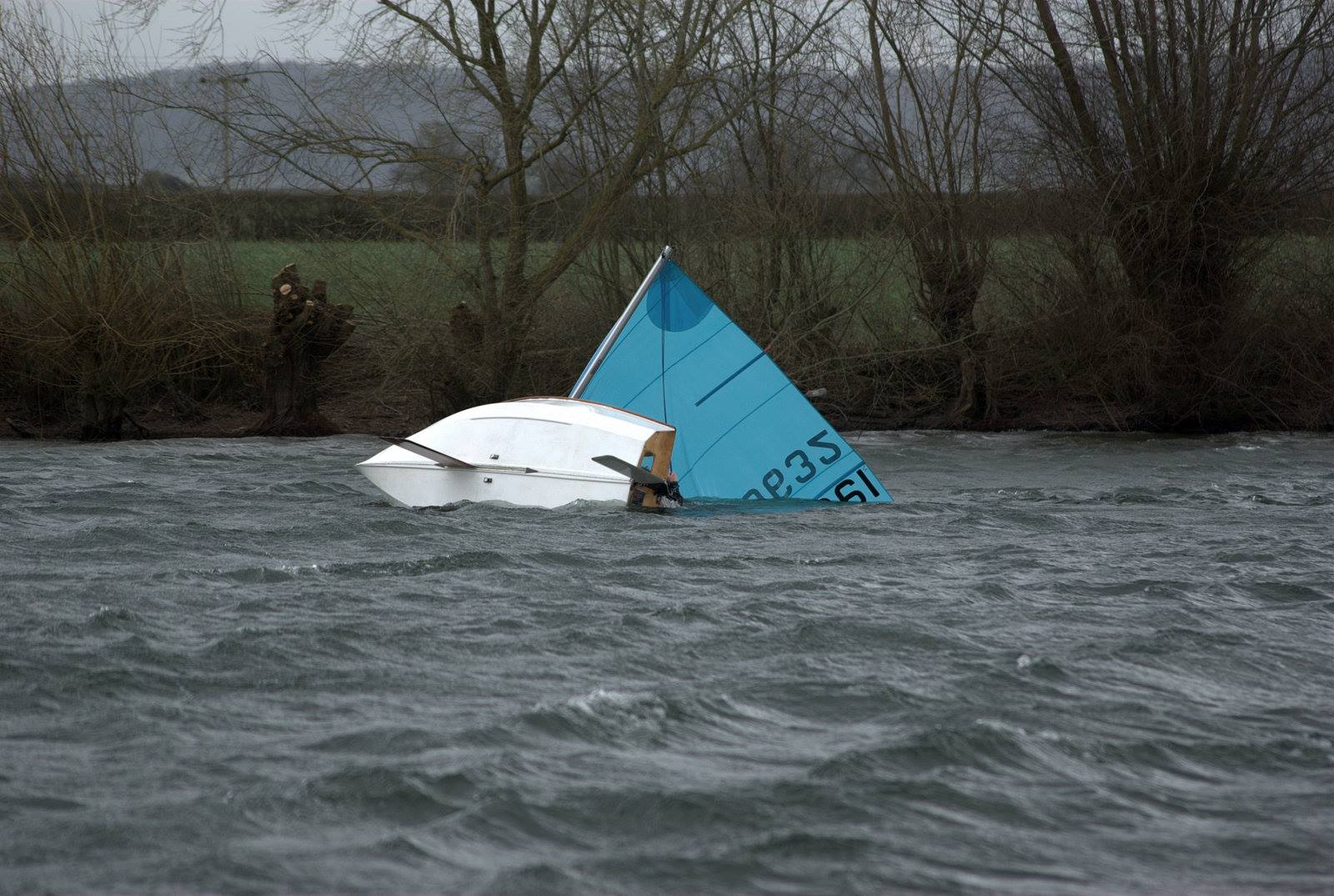 This put us on to a dead run along the bank to the second leeward mark. The dreaded "Green", the mark sits around the dog-leg corner of the lake, a notorious spot when there's any kind of west in the wind, as it accelerates between the trees, shifting in great, gusty and unpredictable bursts as it does.

Goose-winged, we planed along the bank, weight well back, eyeing up a couple of boats at the mark ahead of us, one of them an upturned Laser. The gust slammed us just as we cleared the big tree to port, just where we knew it would, and despite the knowing, we could do nothing as the bow buried in and Buffy viciously twisted and flipped in protest. We brought her back up, but the uphaul on the rudder got snagged in the mainsheet ratchet block, jamming the main. Moving back to clear it with my knife, Buffy gybed and put us in again. 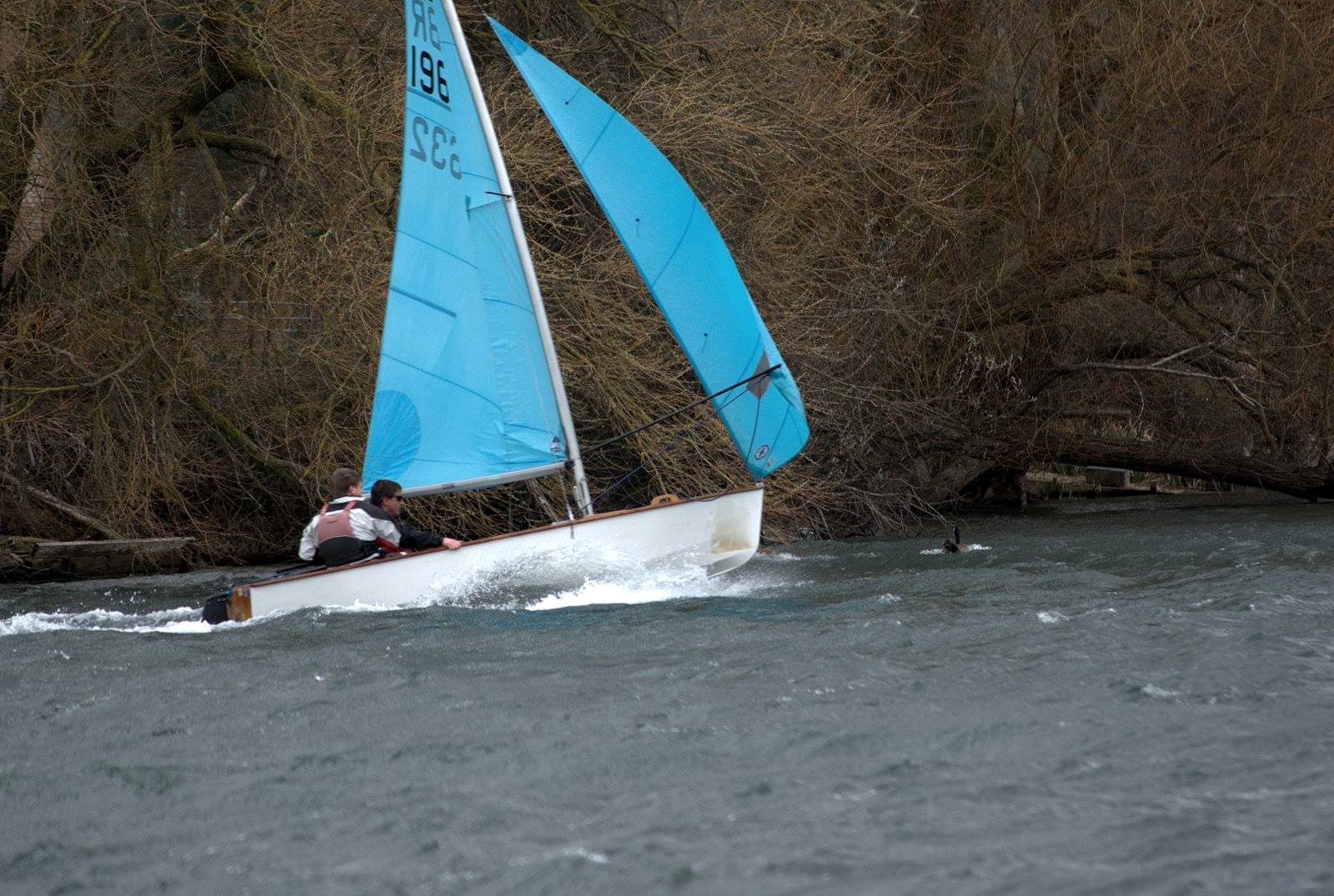 Mainsheet now clear, we got back up and sailing, but were now just about beat. Another knock-down, another swim, and we called it. I can't say we quit exactly, more that we simply came to a mutual acceptance that we'd been collectively thrashed by the elements and were done. 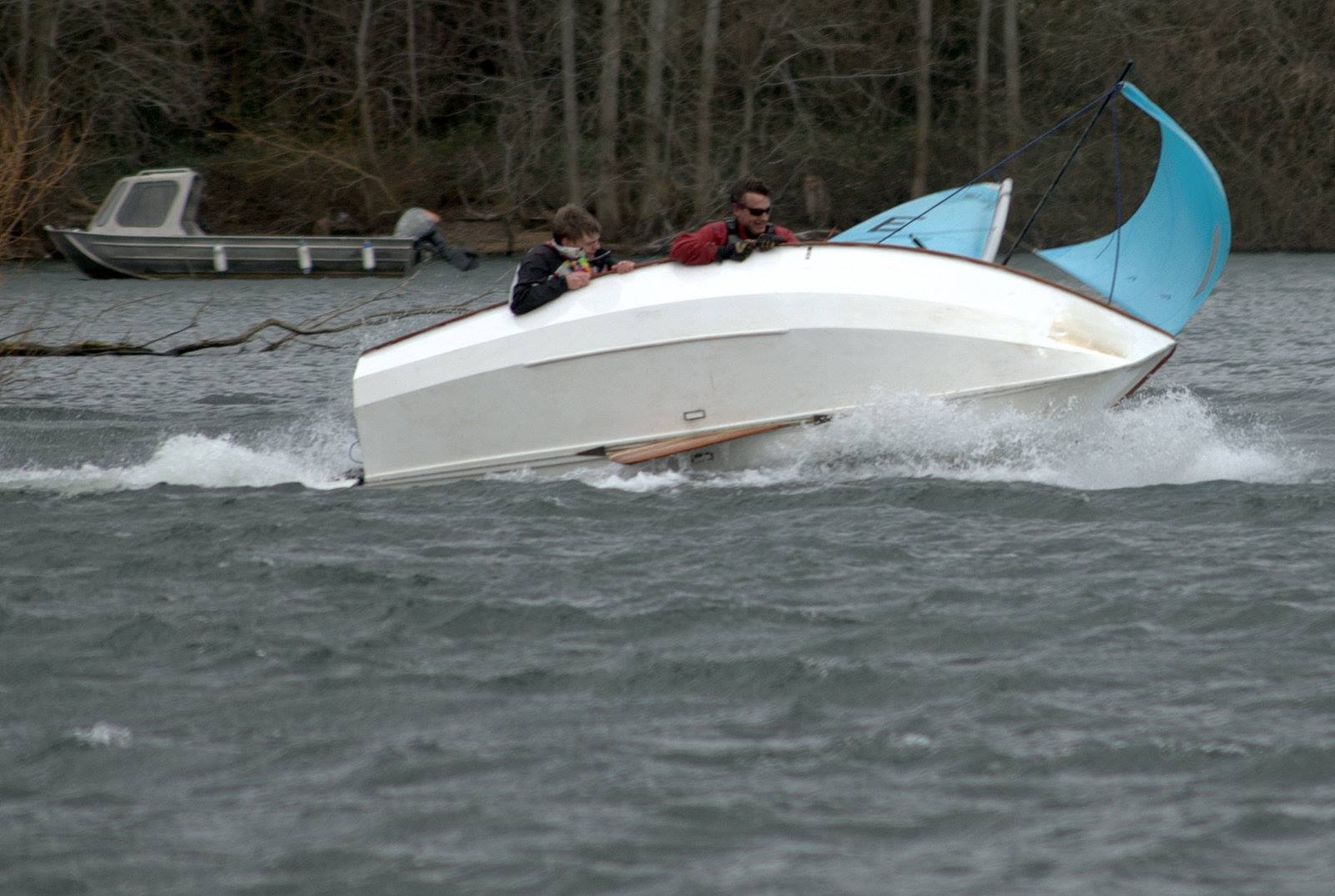 We limped back in, tail between our legs, landed and packed the boat away, tying Buffy securely down in her berth. We were far from the first boat to retire, but a trio of Lasers stayed out, if not, for the most part, up, gamely chasing Paul who grimly held on to the lead with his Solo until, in the face of deteriorating conditions the race committee abandoned racing. 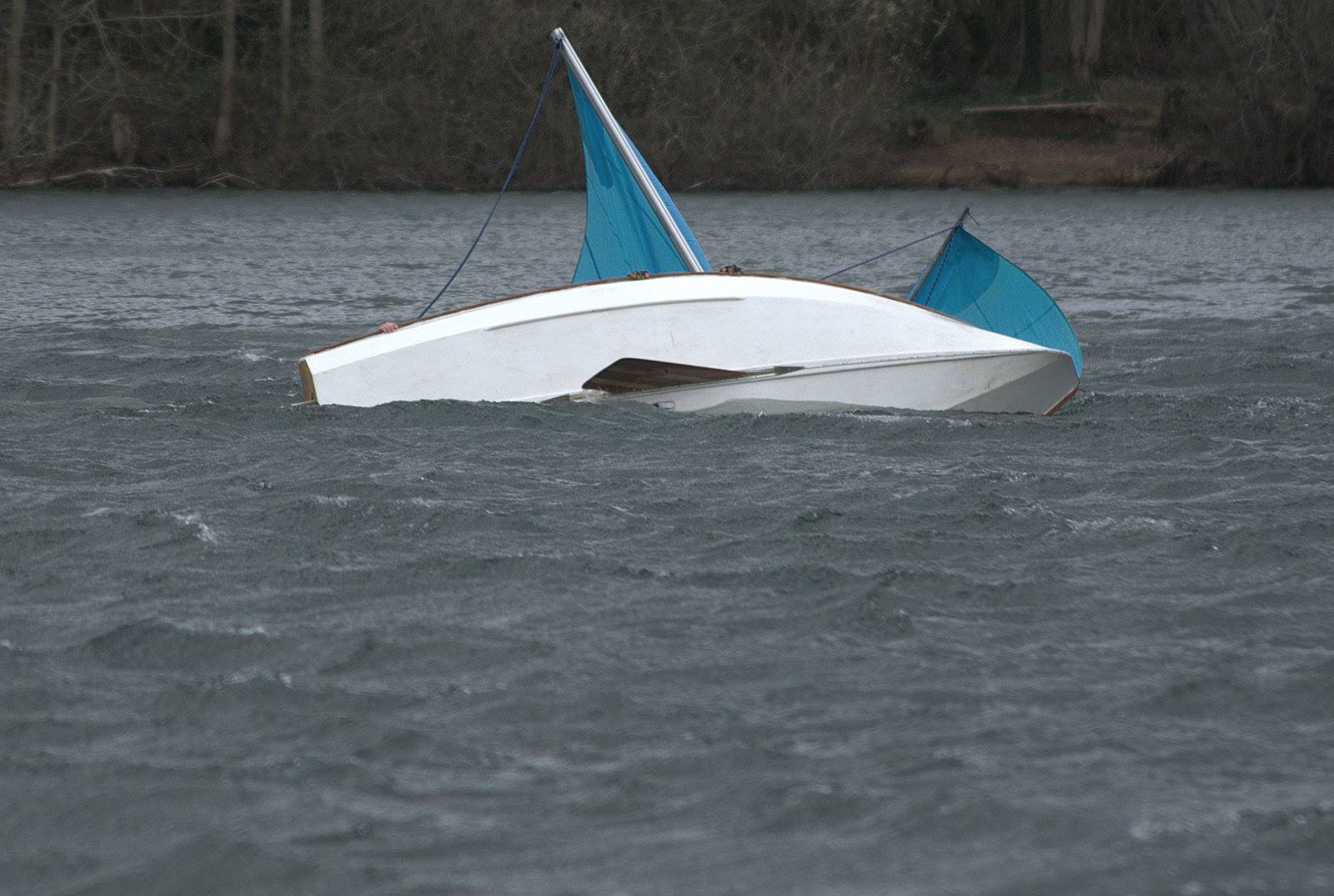 The biggest gust recorded at Frampton on Sunday was 42 knots.

Bruised, but with nothing broken but our pride and another burgee lost to the mud at the bottom of Frampton's lake, I can't say we exactly enjoyed the sailing but I'm glad we went out. Although I've read it's better to be ashore wishing you were out there than out there wishing you were ashore, it's sometimes good to push things a little where you can. And the nice thing about a small lake is that if you push things a little too far, it probably won't kill you, as long as you're suitably prepared and equipped. So it's good to sometimes explore a few limits. 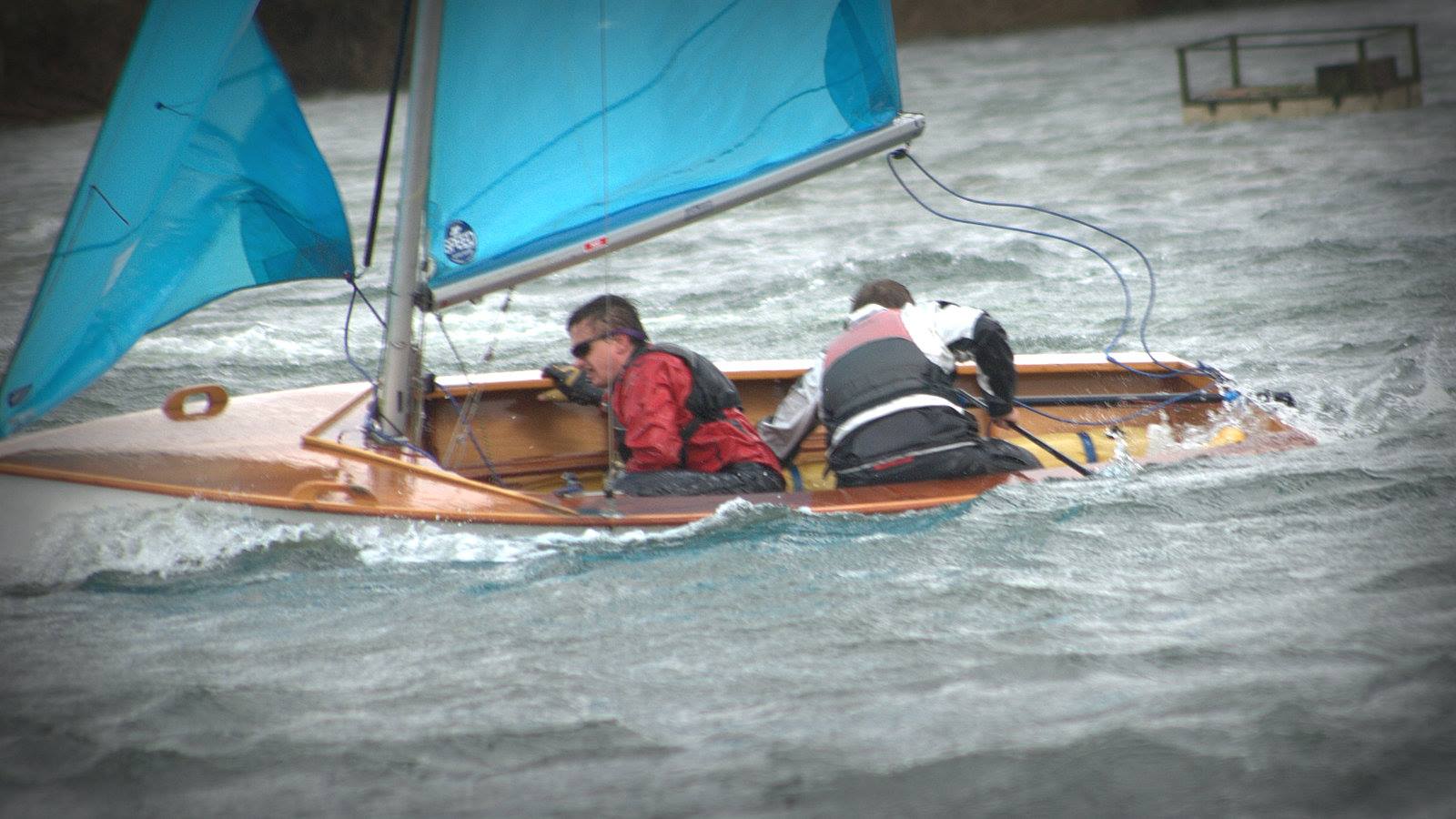 Force 7 in an Enterprise is one of mine.

Credit for the photos go to Nick Hartshorn and his son Finn, who were kind enough to look after my camera for me, finding time to point and shoot and keeping it safe and dry, whilst also manning the clubs's second safety boat.
Posted by tatali0n