Just read a story on the BBC about a little lad opportunistically taking a "selfie" with Prince Charles when he visited the lad's church earlier this week. Got to admire the kid's audacity, it made me smile. 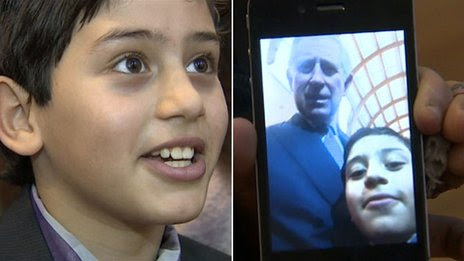 I met him myself (the prince, that is, not the lad) when I was in my teens, at the British Embassy in Kuwait towards the end of the 80's. There was a royal visit, and the school band was asked to play on the veranda of the embassy. Afterwards, we were all lined up as he walked along the line with his missus Diana, saying hello and shaking the occasional hand.

I've always been a bit ambivalent in my attitude to our monarchy. They're an expensive hobby for the country at large, but then they do represent something about the UK, and having a figurehead or rallying point is not a bad thing. So emotionally, I'm probably a royalist, but intellectually I have republican leanings.

What I will say, is despite standing in that line determined to maintain my teenage cool and not be impressed, when he drew near it was impossible not to get drawn in my his charm and charismatic humour. He was interested, engaged and impossible not to like. I found myself utterly disarmed and grinning like a fool.

His wife however seemed detached and irritated, impatiently wishing she was somewhere else.
Posted by tatali0n