Spring has sprung. Noticed the first daffodils beginning to push through on my way into the office this morning. Weather has warmed up since last week, currently around 10c. I guess we're currently in the warm sector of a frontal system that'll push itself over the country over the next few days with the storm that's forecast.

Apparently the Met Office have named this one Christoph. Hopefully Christoph won't blow the garden fence back down that I've only just screwed back together and put back up after Bella had her fun with it a over Christmas.

I'm not sure I particularly like the Met Office affection of naming the various storms that hit us as if they were new born babes. In any case, Christoph sounds like a jerk. The weather's forecast to turn icy again by the weekend, so at least if he does knock the fence back down the swamp that is currently by back garden should be fairly solid to walk on if I have to go out there and put it back up again.

And it's not as if I have any other plans.

In other news, whilst I might be unimpressed with the modern affection of naming storms, modern technology never ceases to amaze me. Nik told mentioned a couple of nights ago that the oven had ceased to warm up. I'm guessing the heating element has gone; it did this before some years ago.

It needs to be fixed, but I can't say it's a huge priority for me. Most of the cooking I do is done on the hob. The call ended with a dissatisfied "Guess one of us will have to check when we get home" and the underlying, unspoken threat that I'd be cooking tea for the foreseeable until I got it sorted.

However, Dad and I refitted the kitchen back in 2014, which was when we replaced the oven. And I have a habit of taking photos of everything.

So I went onto my Google Photos and typed "oven" into the search bar. And there it pops up, my oven, shiny and new in the showroom on the day I decided that was the one. 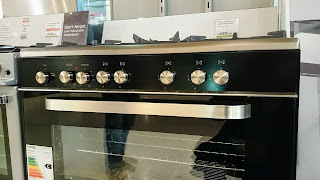 That has to be the singularly most boring photo I've ever posted up here. But from that, I was able to zoom in and sharpen the image on the label sat on the hob, and having then identified that it was Kenwood CK305 (which I don't recommend, by the way) it was a simple matter to source and purchase a replacement heating element for the oven which, if all goes to plan, should be with me by tomorrow.