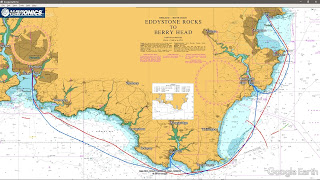 Concerning the two most recent posts, of a moment ago, for a while now, I've been unable to email photos directly to this site, which took some of the convenience and spontaneity out of it for me. I took a few photos whilst away with Nik and Dad aboard Calstar last week; leafing through them I couldn't decide which was my favourite.

The short list all came from the last passage of the week, but from two different extremes of the same day; the tranquillity of dawn over Torbay that made getting up early to catch the tide worth it, or the adrenaline of close hauled that was the accumulation of the nine hour passage as we beat into the unexpectedly stiff southwesterly that later developed to get around the Great Mewstone and finally turn back into Plymouth.

So I emailed both to this site. And both appear to have arrived.

Spontaneity is restored.
Posted by tatali0n