The things you forget you already know

Apparently we have a masthead tricolour light.

I knew we had a switch for one on the fuse-board, but when I originally checked it one night before one of those early pre-dawn departures in the days when Calstar was still new to us, had noted that nothing came on up there when I threw the switch so assumed the switch led to nothing. 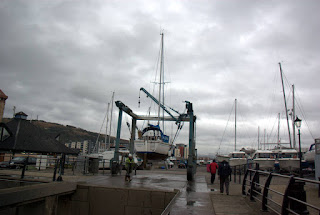 All our night time passages have been with the deck level nav lights running; the single port and and starboard light on the pulpit at the bow, and a separate stern light on the pushpit astern. Uses a bit more battery than a single masthead, but that's not really been a concern for us. The domestic batteries are new and seemingly very robust, and we use them sparingly when they're not under charge. In any case, most of our boat movements after dark have been either under engine alone or motor-sailing. 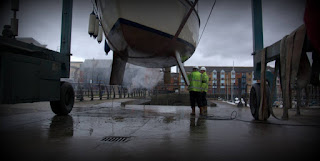 So when Dad told me that Jay, currently working on the boat in Underfall Yard in Bristol, had informed him there was already a light up there I honestly thought they were having me on, although why I could not tell you. So I dug out the extensive collection of photos I took of the masthead through a telephoto lens that day we first pulled her out of the water in Swansea for her survey, before making our offer back in November 14. 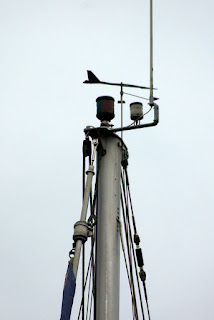 And, surprise of surprises, there is a masthead tricolour. It's been there all along, sans working bulb.
Posted by tatali0n

Amazing what Previous Owners don't do (like put a lightbulb in where one should obviously be). The PO of Karisma had wired the VHF extension speaker socket to the GPS NMEA output, and vice versa, and then spent ages wondering neither the speaker worked nor the radio received a GPS position.