Just making the startline appears to be the hardest part 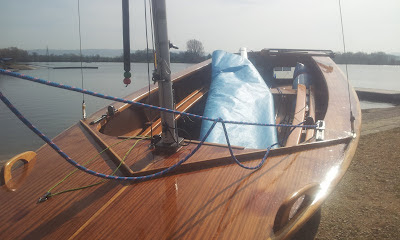 Sunday dawned foggy & still, an hour earlier than the day before on account of the arrival of British Summer Time.

By lunchtime conditions were ideal for H's first race, and mindful on last week's series of blunders, we were early on the startline. Then a family emergency caused us to have to abandon the race and rush back in.

Won't bother with the details here. Suffice to say it was unfortunate but unavoidable; nobody died, all turned out well in the end, and I returned to the Club (this time with youngest son in tow) in time for
the second race. The only real casualty was H, who will now have to wait until we get back from Cornwall in mid-April before she can take the helm for her series. I haven't metioned this to her yet, but I think this might have cost us qualifying.

By the time I got back, the wind had picked up to a shifty F2, veering persistently as the afternoon wore on. We sent Sammy (afore mentioned youngest son) out to amuse himself with a friend on her Topper, re-rigged the Ent and set out for the race.

A shift put such a starboard bias on the startline as to make it all but a reaching start. We spotted it, as did one of the other Ents in the fleet, but most just queued up at the committee boat end as per normal, so pandemonium ensued as they found themselves blocked out to windward by us. A lot of (reletively good-natured) growling and shouting later and we were in the top five around the windward mark.

Despite the reasonable start, we didn't quite get the separation we needed, so got caught up with the back half of the fleet for the first half of the race. We eventually wiped them off on a capsized Laser at the windward mark which let us break free, but by then the front runners had pulled too far ahead to catch. We finally finished in 6th, beating everybody we ought to beat, but missing out on a few that I want to.

But in any case, it was a lovely day for a sail.
Posted by tatali0n