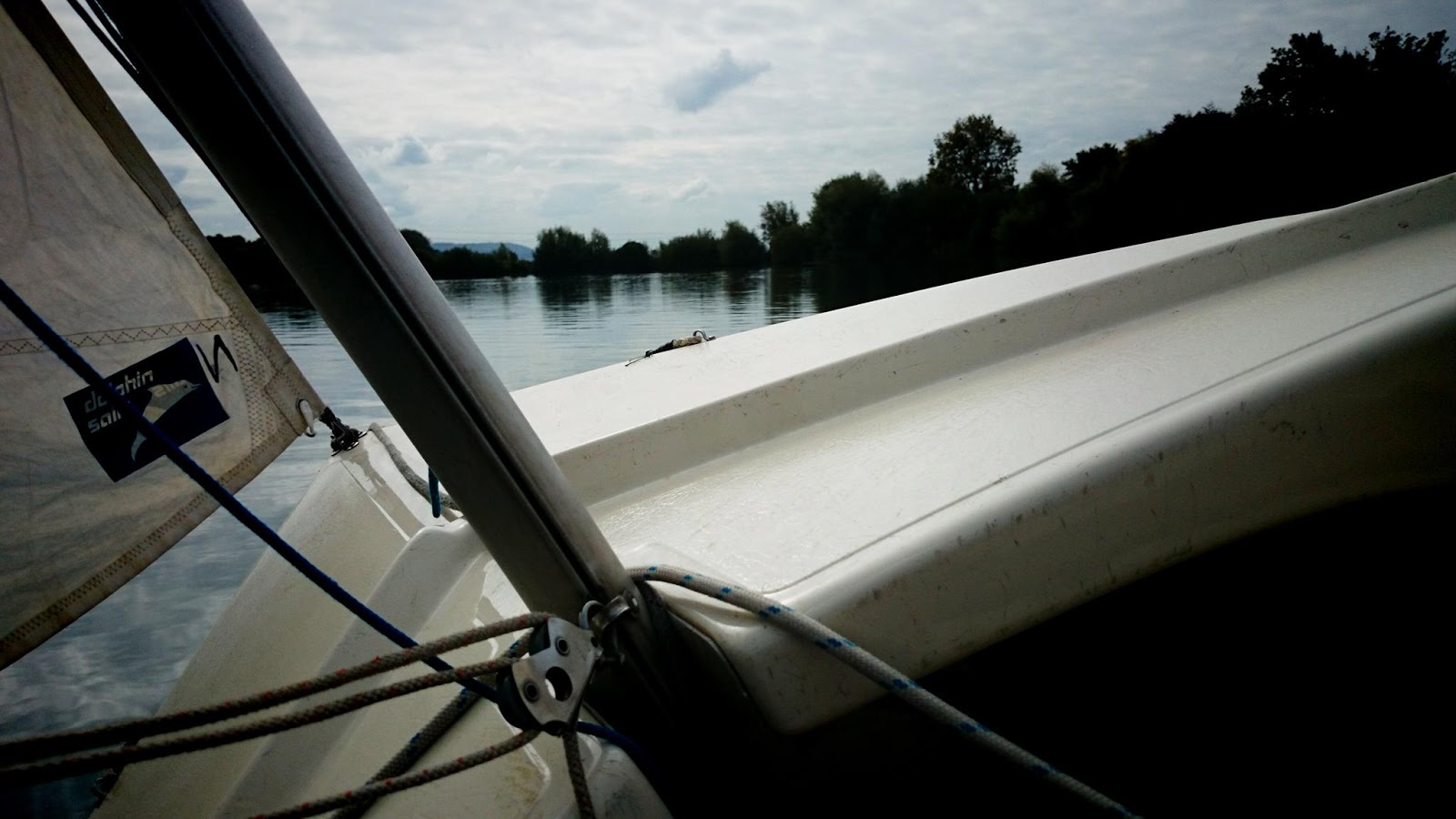 Not much wind today.

Which was almost a pity because today the Club held an Open Day; leave the gate unlocked, invite members of the public to come along and step aboard for a sail. Evangelism at its best. In previous years we've introduced as many as 350 or so souls to the pleasures of skipping around a lake on the caress of the wind.

This time the wind forgot to keep the appointment. Under a clump of high pressure, the air was lumpen and disinterested. For most of the day, the water was glassy, every so often a reluctant autumnal thermal would lift somewhere and we'd get a kiss of air from a random direction, but that was it.

But it was warm, generally sunny, a lovely day to spend on or by the water. This year, I think the numbers were closer to 170. But I suspect the Club will get as good a yield of new members out of it. If you turned up today to "try sailing" it's because you'd already set your heart on it and were determined to try regardless of the conspiracy of elements arraigned against you.

I spent the day railing against engines. I capitulated in the morning to Dad aboard the Lugger, and let him taxi our Sailability friends around the lake with the outboard. Pick the fights you can win, dodge the rest. I defected to the Club fleet, thinking at least there I'd find sail.

But they had it in their heads that there wasn't enough wind, and it was better to stick our guests in the dinghies and tether them to the safety boats and tow them around the lake.

In fairness, having been forced to capitulate and play the tow-boat captain a few times, I never once looked back at my charges and saw a frown. The magic of being water-borne captured them as surely as it had ever captured me. One young lad, who had earlier in the day ghosted around in a Wanderer with me and his family, asked to join me in the tow boat and I gave him the helm, under very close supervision and never out of reach of the wheel, throttle or kill-cord. "This is the BEST thing I've EVER done" he exclaimed, repeatedly, "Just wait till I tell my friends at school!"

Aside from the enthusiastic young Charlie above, whom I'm sure will be back, I did manage to sail a few others around.

I find something magical in ghosting along under sail. It's an act of balance, precision, faith and emotional adaptability. You get everything set, the boat begins to move, then something infinitesimally insignificant shifts, and you either recognise it instinctively and adapt or you fluster and stall. And at some point, wave or chance or a shift of weight, you always fluster and stall.

It all goes to hell. Or backwards. Or in circles, aimlessly, sails flapping lethargically, mocking you. Then the head takes over, you work things through, adapt, change, shift and adjust, and the sails fill in again and the boat first begins to move, and then you shift the helm a little to move in roughly the right direction. Instinct takes back over, and you start once more to ghost, as in tune with the boat and the air and the water as it's possible to be.

It's as close to prayer as I ever get.

Not true. It's as close to my prayers getting listened to as I ever get.

I spent a pleasurable day today introducing new folks to the water. A few of them got to ghost along with me. One or two, I think, could hear a whisper of the poetry in what we shared.