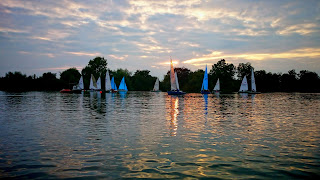 Was the drift we expected. The British Moths pretty much had their way with the rest of the fleet, but then again, this was pretty much their wind.

After a troubled start and shabby first leg, we eventually pulled out of the rabble and spent the rest of the race chasing Ghost and the two Moths.

Caught one of the Moths by the end, but he'll still hammer us on adjusted time after handicap.

Think we're looking at a 4th. Not a bad effort on the part of my helm.