And that was that 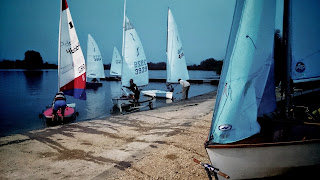 Great start, great first half. Light, shifty easterly, but two beats. We couldn't keep the Rooster or Phantom behind us for long, but kept hot on the tail of the other Enterprise, Ghost.

Until a particularly congested rounding at the windward mark as we caught up with the Solo fleet.

Ben was overly aggressive, tried to pass in front of a Solo, them on starboard, us on port.  They touched us. They didn't have to, their's was a separate race, but they didn't have the courtesy to bear away a couple of degrees to spare Ben the consequences of his misjudgement.

The subsequent penalty turns cost us a couple of places and any shot of taking Ghost, and with her, the third place overall we were trying for.

Our worst race of the series. But it was still sailing, still on the water, still a race, so not all bad.

As for the Solo, we've no need to take it personally. And there will be plenty of opportunity to come for me to pay him back in kind over the many races yet to come.

That's all part of the fun of the game.