Recently read on a fellow Bristol Channel sailor's site (2wheels1keel.com) that his very first dinghy was a Prout Puffin. That put a smile on my face and sent me scurrying back through old photos to dig out pictures of a long ago summer and my own first sail boat. 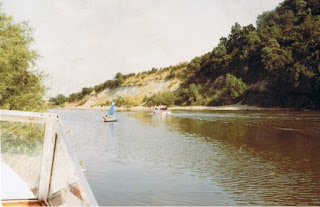 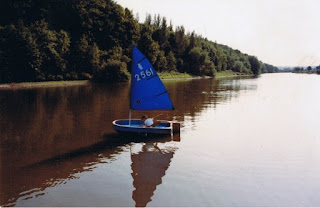 They pictures were taken by Dad just down-stream from Wainlodes on the lower reaches of the navigable River Severn, which, of course, feeds into the Bristol Channel I now call home just a few miles further down. You'll note the colour of the water is almost the same, albeit still fresh at that point.

Dad had borrowed the dinghy from my Uncle Mike to use as a tender for "Paddler", the 26' river cruiser that back then was our summer home. Uncle Mike had said we'd might as well take the mast, sails and foils. Insatiably curious, I badgered Dad into showing me how they all slotted together and explaining the whole sailing thing worked, and then spent the rest of those six heady weeks of summer teaching myself to sail at every chance I got.

I wasn't very good. But was utterly enspelled by the magic of it.

By the by, Paddler was a cunning piece of marital manoeuvring on Dad's part.

As I remember it, a year or two earlier Mum and Dad had sold their UK house but found themselves "gazumped" on their intended new property and therefore without anywhere to live at very short notice; in a time of rapidly spiralling house prices that were the mid to late 80's, this was a practice where the blaggard seller of the house you were moving into changed his mind and sold to somebody else for a now higher price. Dad persuaded his disappointed and at that point somewhat desperate wife that it'd be quicker and more certain to put a good part of their now liberated capital into a boat and live on that for a few years during our summer holidays. The rest of the year, of course, we were based out in the Middle East for Dad's work.

The domestic experiment concluded a couple of summers later with Mum having moved out and living with Gran and a summer of definite discord. Until Dad bought a little terrace house on the outskirts of Gloucester. Under Westgate Bridge. On the banks of the River Severn. Where, of course, he could moor his beloved Paddler just outside the back door.

Harmony was once more restored. Marriage is all about compromise.


Tom of 2wheels1keel.com has long moved on from his own Prout Puffin and is the new skipper and proud owner of the Bristol Channel based Albin Ballad "Sundance". I've just been reading about his Jester Challenge Baltimore ambitions; he's hoping to make the 11th June start this year with Sundance.

I'm almost jealous but wish him nothing but fair winds and good fortune. A friend at Lydney Yacht Club completed the Azores Jester Challenge the year I joined there, which along with a few other revelations at the time, opened my eyes to exactly what could be achieved with just a little planning and ambition and boat well-founded but modest enough to be entirely within my own reach and means.

The Jester Challenge is definitely 2017 a little too soon for me, but one day, most certainly.

Thanks for the mention!

You got me hunting through the loft to dig out my old sailing pics, but I couldn't find any of dear puffpuff (oh how we come up with names when we're kids), infact I couldn't find many at all! I've seen a few for sale and have bene tempted but I'm sure I would look a right muppet in one now.

Hopefully see you in the Channel this summer, be sure to hail if you see the yellow tub!

A pleasure Tom, keep up the writing.

I expect we've both outgrown sailing our old Puffins, and to be fair, they make pretty awful tenders for our kind of boats when compared to the virtues of something inflatable. Though yeah, I could understand the temptation, and eBay is a terrible thing for those little moments of weakness!

Will indeed keep any eye out for a sunshine yellow hull, Sundance is nothing if not distinctive ;)