Buffy: The lady was for turning

We are nearing the end.

Not without a succession of mini-dramas that crop up as we go and need their own special resolution. But we're getting there. Which is as well, as the Redecorating Committee (not their official name, but it'll do) popped their head around the door of the boat-shed the other evening and politely enquired how much longer I thought we'd be. Seems they've finally settled on the design and want to get a shift on with ripping the ceiling out and turning my temporary workshop into a ladies changing room. 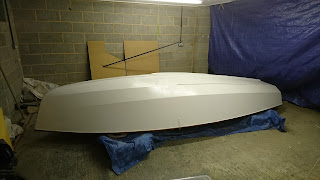 Hels magnanimously offered that we'd be finished within ten days. John (said representative with head around door) visibly winced, as did I. I'm nearing the end of my emotional tether just as their impatience is evidently now escalating. I want us out by the end of this coming weekend. John smiled and visibly relaxed.

We've spend the last few days with Buffy on her back, painting her bottom. Sorry, I mean with the boat upside down whilst we painted her hull.

In an idea world, I'd have spent much longer smoothing out the hull in preparation, and then applied a couple more coats, but in the end we simply sanded out any loose paint and keyed up the remainder, then slapped three, maybe four coats of gloss on her. 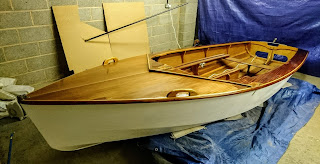 It's not a perfect job, but she does look a lot better. On Wednesday evening I sanded over the hull with very fine grade wet and dry and then buffed up with a car polisher our friend and fellow Ent sailor Charles had kindly leant us. I'd left Dad to his own devices for once (he probably spent the evening in his workshop varnishing our restored centreboard) but Hels had sent her husband Matt down to the Club to represent her and keep me company as I worked. He did prove handy with a screwdriver when screwing the slot gasket back on however, and was very useful to have around when it came time to turn the boat right way up once more, so his company did have more value than the mere moral building qualities (and distraction) of his conversation and company.

The still raw varnish of the topsides had been marked where the boat had rested upside down on four tyres. That had been expected however, and a bit of wire wool smoothed those scars out. A bigger disappointment were in the form of three thumbnail sized bubbles, two on the port side-decks and one on starboard, where the laminate had lifted beneath the varnish. They were each in the area of some epoxy fillings we'd made before starting the varnishing, where the original varnish and laminate had cracked during the season and damp had got in. 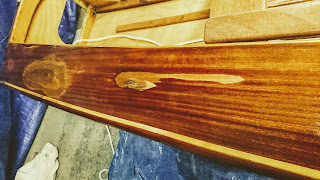 I had sanded back the visible damage before filling with epoxy, but had been very conservative, hoping to preserve as much of the top layer of laminate as I could. Clearly, in this case, discretion was not the better part of valour, and it's come back and bitten me.

It was depressing to have to take the sander back to four painstakingly laid coats of varnish to get down to the laminate to sand away the lifted areas. But it had to be done, and better we found it now whilst we still had the shelter to effect the repairs than in a few weeks once she was back out in the wilds of the boat-park. 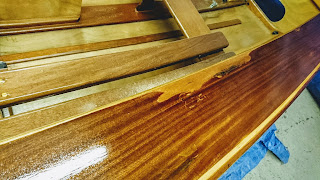 The laminate cut back and smoothed down with finest-grade sandpaper, I wire-wooled up the surrounding varnished areas, and then re-varnished each side deck with a thinned coat of varnish. Thursday and Friday evenings will afford us the chance to put another couple of coats on, rest her for Saturday whilst I head down to Portishead with Dad to do some work on Calstar and then refit Buffy on Sunday and move her back out to the boat-park.


The outskirts of "Storm Doris" is battering the windows outside, though occasional sun is still breaking through. It seems to me that since they started naming the more significant weather systems in recent years, the whole media has started getting terribly hysterical about them.

There are two Bristol Channel pointing webcams I'm rather fond of visiting whenever I'm feeling a little too landlocked.

Sugar Loaf Webcam is hosted by Portishead Yacht & Sailing Club and looks out over Kilkenny Bay just west of Portishead Point, a stone's throw from the marina where we keep Calstar. 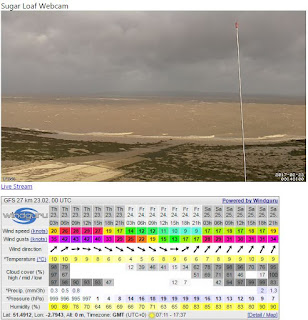 The Porthcawl Lifeboat Station Webcam looks out over the breakwater at Porthcawl on the eastern side of Swansea Bay about 35 miles down-channel from Portishead, towards Nash Point.

High water at Porthcawl is at 1632 on Thursday afternoon. The westerly wind clocked 46 mph when I checked a moment ago. I might have to take a brief coffee break away from my work later on today to go watch the waves breaking against the pier.
Posted by tatali0n