Ate my lunch at the lakeside yesterday, watching friends race out on the water. One race in a number that make up the new year's unofficial "frostbite" series. No race committee, just enthusiasts that can't wait for the official season to begin, so they set a timer on the shore to govern the start and duration of the race (that's the black box to frame right of the photo) and go out and race amongst themselves.

Had I a plastic boat, I'd have been out there with them.

The "frostbite" label can only be ironic this year, the winter temperatures being so warm. In previous years we've broken the ice to sail. And in one year I can think of in particular, the ice was too thick to break so I settled instead for walking the dogs around the lake.


This year however, I'm condemned to spectate, in between bouts of sanding, gluing and varnishing. Still, it is a pretty spot to be stuck with such labours. And the hull of the little racing dinghy is coming along nicely now. 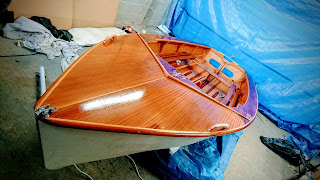 The centreboard is a different matter however. An unnoticed and therefore subsequently neglected crack has let moisture in, which has wicked up through the one of the softwood laminates and caused some extensive rot. In my defence, it'd been an age since I last capsized the boat, albeit this happy omission being more a function of the light weather we enjoyed late season last year than any ability, so the damage to the board had been invisible until we removed it for our winter maintenance.

A replacement board would cost in the region of around £240, so we're going to try and rebuild what we have with epoxy first. I say "we", what I mean is Dad has the board over in his workshop now, and he's kind of clever with this sort of stuff.

It's not the first centreboard he's rebuilt for me.


By way of a footnote to the weekend, we finished with a gig last night. I'm pretty sure late nights followed by early mornings used to be much easier back in the day when I was still drinking at gigs. Then, I'd get home late and quite, well, not to put too fine a point on it, "tipsy", but have little trouble getting straight off to sleep. These days, forced to sobriety by the need to drive there and back myself, I get home late and then still take hours to wind down enough for bed, even with the threat of an unavoidable early morning to follow the next day.


It was a pleasantly local affair however, a pub on the other side of town where my daughter and her boyfriend Dan work, so we had a lovely collection of friends and family join us, including my wife and dad. Packing up to leave around midnight, we left Dan and Tash in front of a big screen with a few of the pub's regulars watching the American Superbowl into the early hours of the morning. Apparently my daughter is a "Falcons" fan. Being somewhat football agnostic, be that British or American, I'm not actually sure what that means. But enthusiasm I can understand,