All this grumbling about the woes of deep winter, being condemned to the half-light of a workshop and submerged in a morass of sawdust, epoxy resin and varnish, I realise I'm in immediate peril of over-indulging in self-pity. Had I any sense of shame, I'd probably be embarrassed.

One of my favourite trips last year was the run from Swansea to Tenby and back aboard Calstar with Nikki.


Whilst moored up outside Tenby harbour we struck up conversation with lovely couple called Kevin and Tina aboard a gorgeous 37' Westerly Typhoon out of Milford Haven called "Swn-y-Mor" a mooring over from us. Later that day I joined them for a beer aboard their boat whilst Nik, exhausted from a day of touring the fleshpots and tourist traps of Tenby and the stresses of the sail over from Swansea the day before, had a rejuvenating nap aboard ours. We drank Tenby ale, nattered and swapped stories as the day faded; Tina in particular was at pains to provide some valuable and appreciated insight and advice on introducing Nikki to sailing and cruising as it had become apparent much earlier that day that Nik was very new to this, as Tina had been once also. 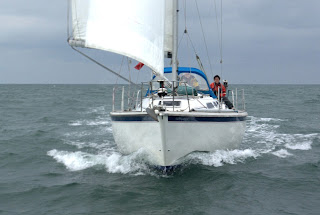 The following morning, leaving Nik asleep below, I cast off a little before dawn for the trip back to Swansea. The forecast promised a gusty F5 from astern, so I motored out across Carmarthen Bay to clear the firing range before it opened at 0800, crossed Helwick Bar as Nikki awoke and came up from below to be greeted by a pod of dolphins (previously written of up here so I won't revisit it, even though the delight of the memory remains vivid still) and then silenced the engine as we drew abeam of a picture perfect Worms Head and Rhossili and continued the rest of the way under headsail alone, sailing as conservatively as I could in the conditions for Nik's sake.


Passing Port Eynon, I spotted the expected glimmering white of Swn-y-Mor's sails coming up astern of us through the Helwick Passage. About an hour later off Oxwich Bay they crossed behind us with a cheery wave and the mutual clicking of shutters from mine and Tina's respective cameras, gybed and then powered on ahead under full, glorious sail. 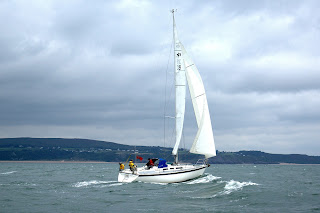 Nik and I have two weeks booked off work this coming summer, book-ended by gigs on Friday 28th July and Saturday 12th August. The plan is to abandon the house and dogs on the kids and head off sailing with Dad; fourteen days, weather permitting, for a trip down-channel and back. Much as I'd quite like to explore Syn-y-Mor's home grounds of Milford Haven, Dad has had his heart set on reaching Padstow for some time now, so I suspect that will be our objective, although again, the weather will be our tyrant and dictator in this, as always.


Blue waters and two weeks of freedom though with Dad, Nik and Calstar. Can't wait.
Posted by tatali0n