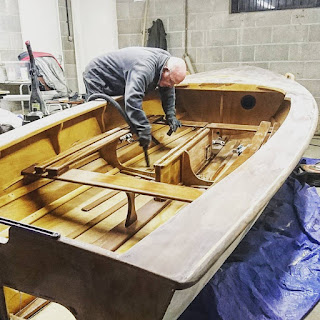 Having now established that my labours to include my Instagram feed in the sidebar of this site will be of no benefit to anyone reading this on a mobile, I thought I'd share my favourite Instagram photo from the few I took yesterday.

The end of an evening's hard graft.

Hels and I spread a thin, protective layer of epoxy over the decks last Sunday. It seemed like a good idea at the time. The temperature then crashed to about -2C overnight, and the epoxy failed to properly cure, leaving a waxy residue over the entirety of the deck. By about Tuesday evening it became obvious it really wasn't going to get any better, so by Wednesday I caved into the inevitable and Dad and I started sanding it back.

I say sanding; it was more properly a case of rubbing at the waxy decks with sandpaper until the stuff stopped rubbing off. Imagine trying to sand a candle. It was a bit like that.

By about 2200 Thursday evening we were about done, and the decks were once more producing a lovely layer of fine, dry dust anywhere the sandpaper touched instead of horrid little rolled sausages of waxy, failed glue. Dad set about hoovering up the dust, and I sat back and took a photograph of him doing so.

We were in any case essentially back to where we'd started last Sunday. Which you'd think would be a depressing thing, but actually, after all the raw muscle-power involved in returning the decks to a state fit to receive a first coat of varnish, was strangely satisfying.
Posted by tatali0n