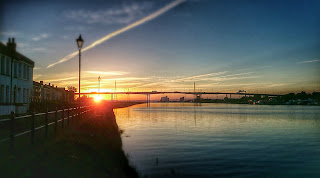 The problem with the furler is two-fold.

The halyard wrap that was preventing us from furling the genoa on the run back to Portishead was, I'm quite certain, self-inflicted. Not enough tension in the headsail halyard, for whatever reason. It had been reluctant to furl outside Cardiff on the Sunday as well, but we'd "persuaded" it; I'd gone forward and manually twisted the luff of the sail as Dad had pulled on the furling line and, that time at least, it had worked.

There is slight chaffing of the outer sheath of the halyard, just short of the eye-splice where it shackles onto the swivel, which suggests this wasn't the first time we've wrapped the halyard around the foil.

Lesson learned. At some point we'll need to replace the halyard. But then that's currently true of most of the running rigging. If it can last out the season, a job for the winter perhaps.

The other, possibly more significant problem was being unable to bend the genoa back on to the foil because the top swivel kept jamming, most likely because of the significant wear to the inner nylon bearing.

We went back down to the boat on Wednesday evening to have another go at fixing this.

The furler is old, originally installed with the boat I suspect, and Colnbrook is, I understand, long out of business, so spares are not generally to be found.

Figuring the problem was the nylon bearing on the swivel, I took a couple of cans of silicon lubricant and a roll of jap tape. If there was enough play between the damaged bearing and the foil, I thought I might be able to supplement the bearing with the jap tape. Although not cheap at more than £20 a roll, the stuff is brilliant for packing out dagger-board cases, so maybe the same idea would apply here.

As we pulled into the marina car park, it suddenly struck me that I'd left the keys to the cabin of the boat on my bedside locker. Not a huge problem, Dad has his own set of keys, and the odds of us both forgetting them were, what?

Let's just say, well, not in our favour. And the companionway hatch is pretty secure, even if you have a full set of tools. Dad did try taking the ventilation grill off to try and get at the catches from behind, only to finally give up when he discovered that the grill had been neatly routed out through the wood behind the metal facing. All was not lost, however. Except, perhaps, the cup of tea from the galley I'd been looking forward to, and the genoa itself, securely stored below. The problem we'd come down to fix was on the foredeck, and we had our tools to hand.

Taking a fresh look at the swivel, I was relieved to discover it still jammed even if I tried to haul it aloft without the genoa attached. That eliminated the luff of the genoa or the luff-grove of the foil as the problem.

The jap tape, although still a good idea in my opinion, proved a dead end, as whilst there was some play between the swivel and foil, there wasn't enough to fit the tape. However, an hour of hauling the swivel up and down over ever increasing lengths of foil, each time spraying in liberal quantities of silicon lube, eventually paid dividends. By the time we'd finished, the swivel was running up to the top of the furler's foil as sweet and as smooth as could be, and dropping back down again, pulling the halyard with it, entirely under its own weight.

We're heading back down to the boat for about 0800 Saturday morning, with keys, to bend the headsail back on. If all goes as smoothly as it should, we might even get the chance for a quick sail, with high water a little after 1000. I quite fancy heading out and around Denny Island, then maybe up to "Outfall" Buoy, off  the banks of Avonmouth. A couple of hours, no more, but hopefully enough to sate me for the weekend, as it's the only chance to sail I'll get.

Unless I persuade a certain young lady to let me have a quick go in her Europe on Sunday between races.

With the swivel amply lubricated, we decided to rectify the lack of a cup of tea by calling in at the PCC clubhouse in the nearby village of Pill on the way home for a pint or two. Dad, heroically, was driving, so would have to forgo the pint(s) of Doombar I was now eagerly looking forward to, but the Club does also stock a fine bottle of ginger beer behind the bar, so some small compensation for his sacrifice could be found.

We parked up in Mariner's Way in the small village of Pill and walked back along Marine Parade towards the clubhouse. It was high water and the River Avon was docile and full, it's brimming waters glassy and smooth in the still evening air. A pretty night. Behind us as we walked, the Avonmouth Bridge, a sillhouette against the sinking sun, stood as gateway and sentinel to the Bristol Channel awaiting beyond.

Now that's a bridge I've driven over countless times, but we haven't ever sailed under. Yet.
Posted by tatali0n