An unfortunate attraction to buoys and an unnerving hum, unrelated

Dad and I took Calstar out on Sunday. Only local sailing; a triangle out to Denny Island, up towards the Lower Shoots and then back. The wind was mostly westerly with a little north, running with the flood tide and building through the morning, a F4 or 5 expected by the time the tide turned a little after 1100. The sky was overcast, but hopefully due to brighten as the day wore on. So conditions were fairly benign as we locked out at 0930, the pressure of the wind dulled by the pace of the tide running with it even as it flattened the water.

I think I've remarked before on how "attractive" the buoyage is around here. Even with all this relatively open water, it seems to conspire with chance and, occasionally, accident to always seem to be trying to suck me on to it. Dad suggests it's a special kind of magnetism that attracts fibreglass. He's the engineer, so I guess he knows about these things, although I suspect he's just trying to be kind to my navigation and pilotage skills. 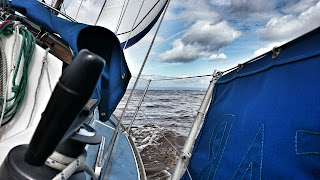 Shortly after we'd locked out, we were close hauled crossing the King Road channel, auto-helm minding the tiller whilst I sorted out tidying up the halyards and assorted reefing and furling lines in the cockpit. Dad went below to put the kettle on and some bacon in the pan for breakfast.

Before putting my head down to the task of sorting the cockpit lines, I'd checked that we were comfortably on the wind, port tack, a single reef in the main, making about three knots through the water and slowly pushing past and away from the Denny Shoal South Cardinal, then about a cable's length distant and falling off our starboard aft quarter.

Next thing I know, the genoa has backed as we've gone through the wind, our way has slipped off and we're now falling back onto the big, vicious, yellow and black steel buoy which is suddenly less than 50 yards away and closing fast, it's own bow wave now clearly audible against the set of the tide.

I could most likely have finished the accidental tack and still sailed clear, but 4 knots of tide is an uncomfortable place to be in irons with a lump of steelwork  waiting to catch you, so discretion being the better part of valour, I turned the key to start the engine and powered clear of the waiting obstruction.

Once we were back under control, and sailing clear of the offending buoy once more, a double check of things revealed that the power supply to the auto-helm had been plugged in to the socket but not securely screwed in tight. I'm guessing movement in the connection caused a brief interruption to the power supply and had put the gadget into standby, so the boat had gradually headed up and then essentially hove to.

Drama over, we regathered our dignity and bore off on to a close reach to take us out towards the north shore, passing to the east of Denny. The cup of tea and bacon roll Dad shortly supplied made for a very welcome breakfast.

Past Denny we turned downwind, the leg taking us smoothly up-channel towards the Bridge with the now slackening tide at around four knots through the water. A large dredger was working on the other side of the Shoots, off Avonmouth, the noise of her machinery merging with the rush of the motorway traffic on the Bridge. Although the effect on the boat was slight, and the seas still relatively flattened and smooth, casting my eye aft I could tell the breeze had freshened, as the forecast had promised, by the forming lines of short, shallow breaking swell marching up astern of us.


As the tide turned, no slack water to speak of in the Shoots, we hardened up towards the Avonmouth shore. The wind bit, the little yacht heeling over hard as she leapt into the now building sea. Closing up hard on to the wind with the auto-helm holding her steady on the genoa, I let the boom swing as I pulled the second reef into the main. Back off the wind and on to a beam reach I put a couple of rolls into the genoa, and that took the worst of the bite out of the gusts.

Although the wind noise had increased to drown out the drone of the motorway traffic on the nearby bridge and the engine noise of the dredger, now moving away down-channel from us, there was still an odd, mechanical hum, a kind of rubbing noise. I checked with Dad that he could hear it too, it not being a beyond reasonable suggestion that it might just be my tinnitus. Or his, for that matter, although that would've been an interesting feat of telepathy.

Once we'd established that the noise was in neither of our heads, as it seems we'd each first not unreasonably assumed, we momentarily cast a suspicious eye on the wind turbines on the Avonmouth shore. But my attention now fully on it, I could feel a faint, ever so faint vibration through the hull above the slap and pounding of the increasingly choppy sea.

I pulled the engine's transmission out of neutral and put it astern. The prop stopped spinning and the noise immediately ceased. Would it were so easy to switch off the tinnitus.


As we held the tack, the source of the problem now narrowed down if not isolated although the cause still unknown, Dad ferreted about below, head in the engine compartment whilst I released the transmission to neutral or locked it back astern to his instruction.

The cause or specific location continued to evade us. Something, somewhere, between the prop, the prop shaft and the gearbox, is rubbing.

It's a real worry. I don't actually like engines; noisy, smelly things that seem designed to suck out all awareness of what the wind and sea is doing around you. However, around these parts they come in pretty handy, and the options are limited and potentially unpleasant given the range and strength of tide if the engine should fail at an unfortunate moment.

We checked the engine still ran, that no water was coming in through the stern gland, and then locked the prop astern for the rest of the beat back to Portishead. 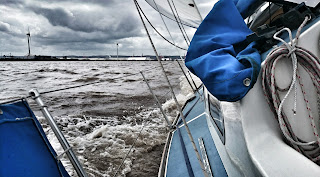 It was a great sail back, lively into a stiff wind over short, choppy tide, another couple of turns into the genoa and the main fully reefed. A liberal application of silicon lubricant and careful attention to halyard tension appears to have tamed our issues with halyard wrap for the moment, and the furler behaved impeccably, as light as a feather in my hand.

Approaching Portishead, the engine started with no trouble, so we struck sail and requested a lock in. Everything went as smoothly as you like under power and within forty minutes we were making her fast back in our berth. 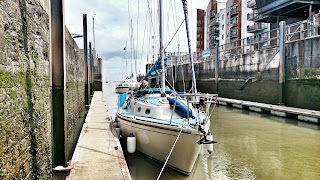 A little over 10 miles and just under two and a half hours under sail. Going to have to work out what that rubbing noise is. Hopefully it'll be easier to cure than the tinnitus I first mistook it for.
Posted by tatali0n