I was just looking at a photo I recently took of Dad, looking down through the companionway at him below, his supper in hand. I was thinking, objectively, that you could probably argue it's not the most flattering photo of him.

But that didn't stop me from either taking it or posting it on Facebook the other week. He's a robust soul, and far from objecting, he shared it amongst his own friends along with the other photos of our trip out that I'd posted with it.

Truth be told, I'm rather fond of the photo. Sometimes an image is more than the sum if its various contours and shades. Sometimes the the message is in the character it portrays. An image is a mere flash, a snapshot in time. The character is part of a greater, far more eloquent dialogue. 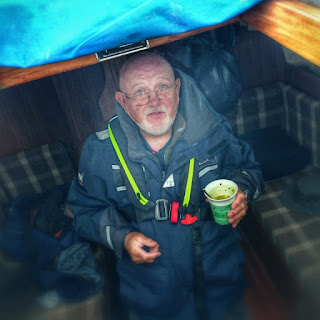 Of course, all that is a much deeper consideration than any of the snaps I take deserve credit for. Though, maybe, every once in a while I get lucky.

Anyway. I thought I'd pay him back by posting an equally unflattering one of myself here, taken on the same day. The picture of me was actually an accident. I was trying to photograph the bridge ahead, but my fingers had inadvertently brushed the on-screen icon that activates the "front" facing camera.

Wikipedia has an interesting article on the evolution of camera phones.

In other news, my car is in the garage, for the third day running. I could've replaced Calstar's genoa for what it's likely to cost me to get the thing running properly again. Moreover, I don't get it back until tomorrow, which is a pain.

Life is much simpler when you're sailing. On which note, there's plenty of that between now and the weekend. Racing Buffy tonight with Ben (hope the present wind holds up into the evening), helping out at Frampton instructing various juniors tomorrow evening and all day Saturday, and, finally, hoping to take Calstar out with Dad for a bit on Sunday.

Nothing grand planned in the latter case. Just local sailing for the sheer sake of it.
Posted by tatali0n