I woke up early, not expecting to sail because of the forecast, to find that Bear, one of our two older GSD's, had had a bad night and was clearly in a lot of pain and discomfort, poor thing. 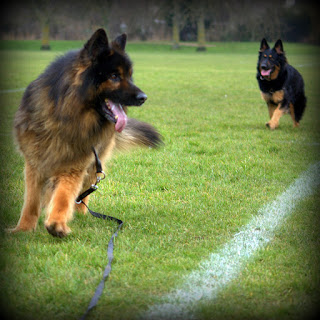 He's a lovely old boy. Not so good with other dogs any more, but he loves people. We don't know how old he is. When he first came to us from the pound as an emergency foster at the beginning of March 2013, he looked every bit the frail old man. But after a bath and after a good brush, he rallied incredibly over the first couple of weeks with us, and we began to doubt our original assesment of his age.

But over the next couple of years, the telltails showed through. His eyes became steadily more cloudy, his wits, already a little addled on arrival with us have slowly disintegrated into a state of benign confusion, his hips and joints are stiffening and there are balance issues which are becoming more and more evident; we're told this is almost certainly neurological and due to a degeneration of his spine and nervous system. All just part and parcel of growing old.

But he still enjoys a gentle walk down the road to the park and back, when the weather is dry, and is generally happy led on his dog-bed in the corner of the living room, and the rest of the pack generally give him the space he needs and treat him with a gentle respect.

Anyway, my plans for Saturday morning were swiftly reviewed; I rang Dad to delay the trip down to the boat till the afternoon and booked an appointment at the vets. 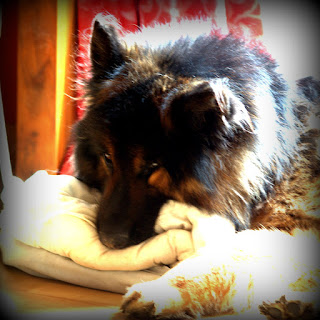 All turned out okay. The old boy had a bit of a fever from some unspecific infection he'd picked up, but an antibiotic jab and some tablets have knocked that on the head, and he's back on a regular dose of Metacam (an anti-inflammatory painkiller) to manage the other symptoms, and will likely stay on it from now on. He's back to his normal self; quite chilled, albeit still perpetually confused, but as long as the other dogs give him his space and leave him his bed and blanket, happy and comfortable.

Saturday afternoon, Dad and I got to the boat. We remembered the keys this time, so after brewing up a cup of tea, set to work on the furler.

Lots of silicon lubricant and the headsail went up with little complaint. The first attempt to furl it jammed, but I'd put too much tension into the halyard this time. After easing it off a little, the sail furled without much complaint. It was still a blowy, gusty day despite the sun, so other than making certain the sail wrapped up tidily, we didn't play around with it too much. We'll save that for a calmer day. Clearly there is a balance between just enough halyard tension to stop it wrapping, and too much so as to not jam the swivel. At least I know understand the variables at play, so we should be fine. 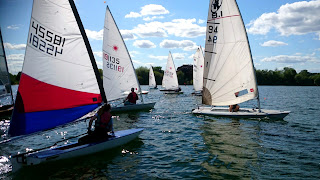 Sunday was spent on the water, but watching other people sail.

Light, shifty winds and bright, warm sunshine, it was far from unpleasant.

Part of the deal with membership of a sailing club like Frampton is that you take your turn on the rota for the various club duties involved with running the racing. Sunday was my turn as OOD. "Officer of the Day"; essentially in charge of getting everything organised, setting the courses, organising the safety boat cover, running the races, working out and publishing the results, making sure the galley and bar are available between and after racing, and then closing up and locking down everything at the end of the day. 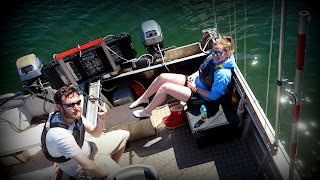 My usual crew Hels was rota'd as my assistant, but somehow managed to fool her husband Matt that it was his name on the duty list. I had a couple of willing conscripts to run the safety boat for me, and Georgia, the young lady and long time friend who recently bought my old Europe dinghy, decided there wasn't enough wind to interest her in racing, so volunteered herself to help Matt and I out on the Race Committee. She was very welcome, and improved the scenery on the Committee Boat considerably. 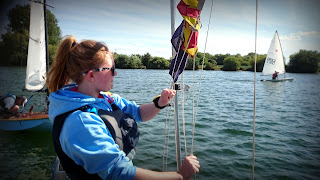 I used pretty much all of the lake for the race, setting a course with a couple of beats, a deep run and a couple of reaches.

As well as volunteering her services for the simple pleasure of our company, and proving herself the perfect scribe for recording the boats positions and timings when my Matt, my AOD's attention inevitably wandered, Georgia also brought with her a seemingly inexhaustible supply of candy to share amongst those of us on the Committee Boat. 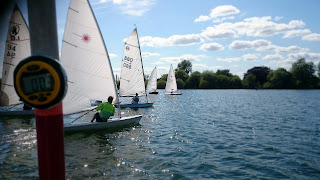 Since we got our Westerly "Calstar", there have been times over the year when the obligations that come with belonging to a sailing club have felt like a bit of a burden. Had it not been my name on the rota this weekend, then Dad and I would have taken the yacht up to St Pierre Pill for the Chepstow & District Yacht Club regatta, so (leaving aside the fact that I wouldn't have been around Saturday morning for Bear had we been away sailing) my turn as OOD last weekend began as something of a reluctant duty. 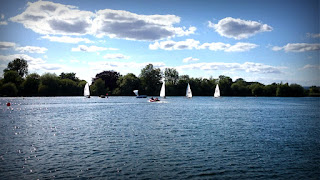 But it's a funny old thing. I love being on the water in pretty much any state or capacity. The Club at Frampton is, in many ways, as good as extended family; aside from teaching me to sail properly, for which I'll always be in their debt, we have so many friends there. They made us so welcome when we first joined, and we've been there so long since, it feels like forever, though in a good way.

So an afternoon spent in their company could hardly ever be considered a hardship, and with a bit of sunshine and good friends to share the duty with me, Sunday in fact proved something of a delight.
Posted by tatali0n