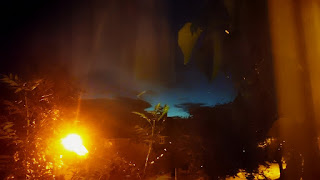 Through the glass of my bedroom window. And there is still a hint of twilight in the sky.

I love this time of year. Even more so than the warmth of late August.

2333 and the last hint has now faded.
I'm already in bed. Instructing tomorrow, taking Calstar out to play with Dad on Sunday.

Foolishly mentioned to a guy I work with today that I'm one day going to sail around the world.

Funny enough, although the words came out wrong, I'd meant to suggest an aspiration rather than an out and out intention, I would rather like to.

Twelve months ago, that would have been a silly, unachievable idea. Maybe it is still.

But now it seems it's part of the twenty year plan.

Only recently realised that there was such a thing, although apparently, by reckoning of hindsight at least, it's been forming for a while now.

Of course, with my lineage, no guarantee I'll manage another twenty years.

But that, I think, is part of the charm of the whole thing.