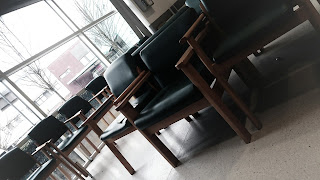 Sunday, and I'm not in Swansea. The marina didn't manage to get the boat back in the water.

Disappointed. They promise to rectify it first thing Monday, so plans postponed to next weekend. Saturday, to be exact, as I have a gig next Sunday.

Instead of the sea, I found myself in a waiting-room at the hospital, having taken my daughter in. Unplanned and unexpected; she had nasty abdominal pains so called Mr from work and asked me to take her in.

Kidney stones they reckon, poor kid. Uncomfortable, but could be worse.

I walked the dogs once I got home. Had meant to take Jack and Lilly up the hill, but Tasha's trip to the hospital put paid to that idea.

Did take them to a different park than usual through, with a pond and a brook to play in. They had fun, I enjoyed the walk. Met some nice people and nice dogs, played ball.

Disappointed not to be sailing. Hard to sweat the small stuff however.

There was a murder outside one of our local pubs in the early hours of Saturday morning. Tash used to work there a few years ago, we eat there as a family every once in a while. The pub is just over the road from Sam's school.

The poor kid was our Ben's age, used to be in his class at school. A fight,  a maniac with a machete.

Incomprehensible. I so feel for the lad's family, such an inconsolable loss. And for his friends, a couple of whom were injured, one severely.

I can't begin to imagine the kind of depravity of mind that keeps something like a machete to hand, or even dreams of using it against another human being. Not in this time,  not in this place.