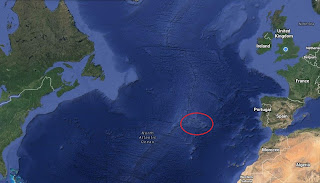 One day, I'm going to sail to the Azores. Been thinking about it for a long time now. Don't know if I'll do it single-handed, or perhaps with Ben. Seems unlikely I'll get the chance to do it with Dad, though we might; a five year plan won't get me there, but the ten year plan should.

It's very possible I'll do it with Dad's boat, though. Calstar is the kind of boat that feels like she's got plenty of room for us to grow in to.

Meanwhile however, we have closer objectives for her. First is just to sail her locally. That'll be local to Swansea in the first instance, which aside from the two hour drive there and back, is no bad thing.

Then the objective is to bring her back to Portishead. We want to do that before the end of February if we can. We'll then race her locally with Portishead Cruising Club. She's not a racer, and isn't meant for racing, but racing is how I best get to know a boat and a stretch of water, so it seems an obvious thing to do.

Not sure if "asocial" is a real word, but if not it can now consider itself pressed into service.

So the spring's objective is to get to know the boat, and get to know our local waters. From Portishead, the obvious watering holes within reach of a day's sailing are Cardiff, Cleavdon, Weston and Burnham.

We'd also like to head up to Lydney for their festival, and up to Gloucester via the canal, just to revisit familiar waters and old haunts with the new boat.

I want to compete in the Holms Race in September, which essentially uses Flat Holm and Steep Holm as racing marks in a big lap starting from and finishing off Portishead. That definitely appeals to me.

I'd like to sail to Lundy over a weekend, which is perhaps a little more ambitious.

And maybe, and maybe just in stages, sail out to Milford Haven and back.

More than enough for one year I think. Next year, Dad and I have been talking about taking her around the corner to the south coast of Cornwall; Falmouth, Fowey, Plymouth, all our favourite sailing grounds of the last few years.

There is a very good chance she's going back in the water today or tomorrow. If so, we're heading over to Swansea on Sunday. If the weather is kind enough, we'll take her out to explore the bay.

If there's any uncertainty in it however, and there might be because I'm not sure of the wisdom of taking an unfamiliar boat out into unfamiliar waters for the first time in the F4 that seems to be promised, we'll spend the day aboard her on her berth in the marina, drinking tea and eating bacon rolls from the galley, planning, plotting, checking and dreaming.

As to why I'm going to one day sail to the Azores? I just want to. Have done for a while now. Up until the last eight months or so, it seemed a bit of an improbable goal.

Much less so now.